Last Thanksgiving was a milestone birthday for me. I don't talk my age except to say Play-Doh and I share a birth year, although it was "born" in April and I was born in November. For this occasion, I went to Virginia to spent the holiday with Carole and Larry. I returned the day after her November 28th birthday. It had been several years since we'd celebrated together.

Thanksgiving dinner was at Larry's parents' house. In the full tradition of American largess, the sideboards groaned with food. Baked turkey, deep-fried turkey, Virginia ham, mashed and scalloped potatoes, sweet potatoes, green beans, peas, creamed and whole kernel corn, cornbread, rolls, applesauce, pickled beans, beets, stuffing and dressing, items I'm forgetting and macaroni and cheese. Mac and cheese is a southern Thanksgiving tradition, I learned. We don't serve that 'up nort'. There were two birthdays to celebrate on Thanksgiving Day in addition to my birthday on Saturday and Carole's the following Monday. I forget how many different desserts there were. We came home with so many leftovers, we didn't cook the whole time I was there.

The next day, we played board games and decorated the house for Christmas. It was 72 degrees out. I had to remind myself this would not last once the sun went down and that was truth. We watched my Hawkeyes beat the snot out of Nebraska in football and then went to the Lewis Ginter Botanical Gardens for their annual light show. Carole and Larry have annual passes to this place because they have become a Pokemon hot spot and Larry loves Pokemon. They figured out they only have to go to 2.5 Pokemon events to pay for an annual pass and the Ginter holds more than that, plus all their other events, per year.

We met friends, Jon and Becky. A cold front had moved through during the football game, dropping the temperature 20 degrees and triggering drizzle. Still, we figured, if we got there 30-45 minutes before closing, most people would be leaving. The timing was perfect.

The theme was "Living Color". The first section you walked into was green. 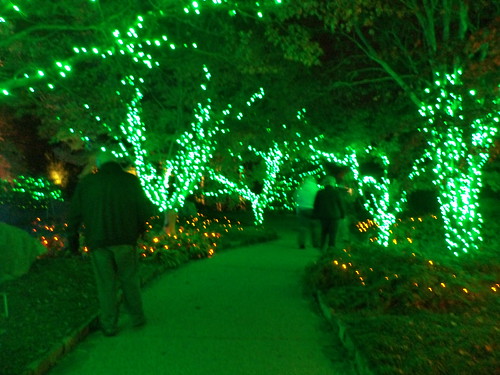 It's a couple mile walk to go everywhere. There was a section for kids with a rainbow maze and tents of multicolored lights.

My little camera didn't do very well with photographs in the dark. I needed a tripod. Some things, like this tree, where I could place the camera on a post, came out fine. But a lot of the photos were blurry. 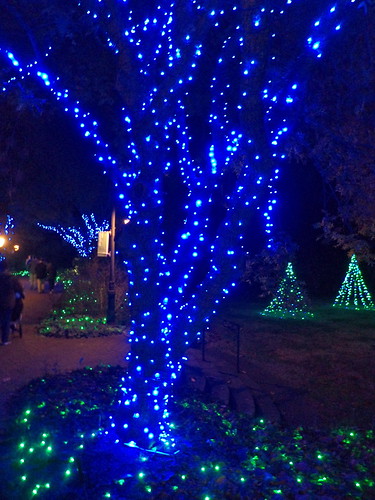 I love this photo, however. 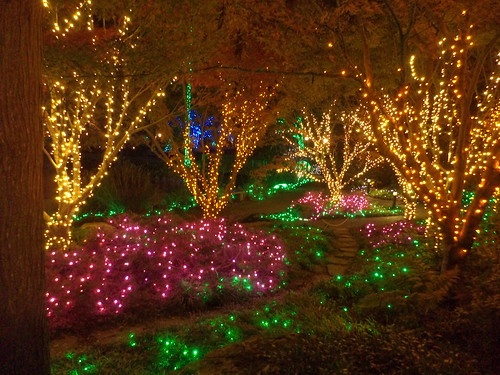 There was a fence and I could sit the camera on the fence and depress the shutter. Enough light from the decorations meant the shutter speed was fast enough to capture the view.

In the middle of the park is a lake. Across the lake from the kids area was a large pavilion where tropical plants were. This was the view from the path up to a watch tower. 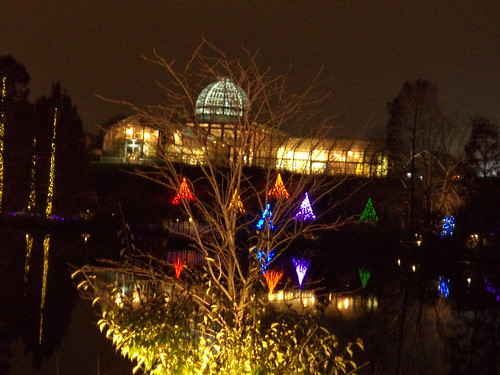 Inside the pavilion was warm and humid, prompting our glasses to steam over. As if the lights around the gardens weren't enough of an attraction, there was this tree in one of the back rooms. 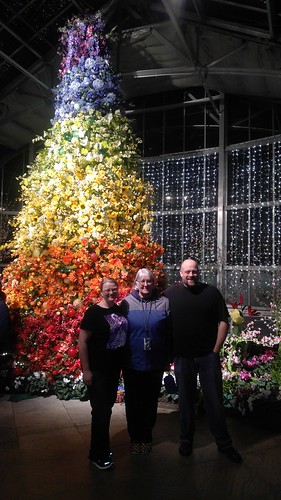 That's Jon and Becky. It was an amazing creation, assembled in the same place every year specifically for photographs. 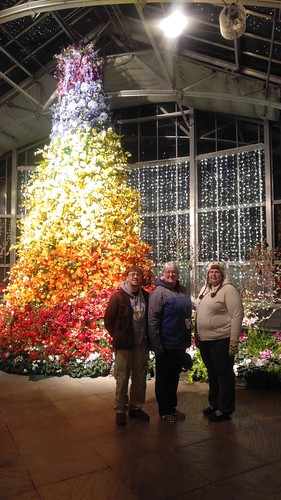 These last two photos were taken with a cell phone camera. For my Disney trip in October, I need a better camera. I like the portability of my palm-sized one, but I need something better to capture the moments.

In spite of the nip and drizzle in the air and the few times we had to contend with obnoxious, undisciplined children and the adults who didn't care, it was a magical event. There are Christmas light events around me which I've talked about attending and never have. I need to go.