Some years ago, I don't remember how many, my mother sent me a box of recipes. 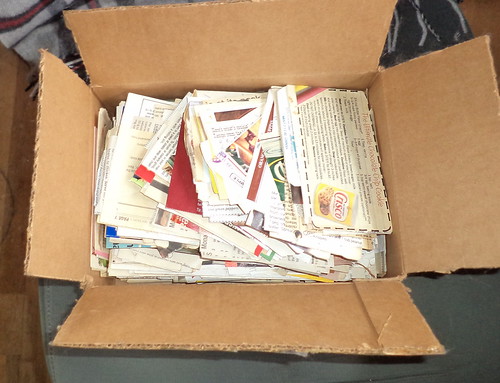 She'd gotten around to cleaning out her recipe boxes, first of all. Then, she went through her mother's recipes for ones she wanted to save. Finally, she sorted through stacks of recipes from my dad's sisters, given to her over the years and dumped into a drawer. When she was done sorting, she sent what she didn't want to me.

There are hundreds here. I have no idea how old some of these are, but they reflect American Midwestern cooking tastes. The box has sat, unused, in the home office for many years. I was going to integrate these with the recipes I save but it would be such a daunting task, I put it off in favor of doing most anything else.

I like to cook, but the realities of my life are that cooking is not something I do when I get home from work. My stamina is gone so whatever supper is must be something reasonably quick. That doesn't favor good food; let's be honest. Ice cream, crackers, peanut butter sandwiches, dry cereal, tend to be staples of dinner. And a diet like that is not good for me. My efforts to reform my diet fall apart simply because I'm tired.

Then one day, I had an idea. What if I cooked one new recipe a week? I could dive into mom's box and make one new thing. I grabbed a handful and counted recipes, using the date numerator. When I got to #28, I read it to see whether it was something I'd make. It was a fruit cocktail sauce to serve warm with ham. Nope. Counted again and got a recipe for green beans with bacon. You won't find me ever making green beans. I cannot stand them. The next batch of counting yielded this. 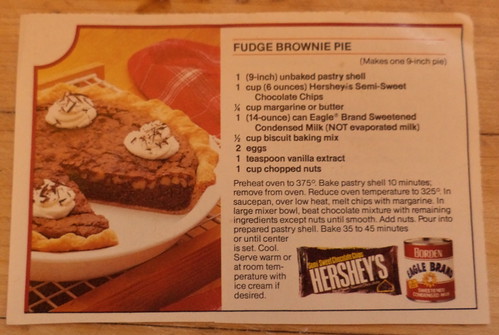 Well, this was something I would eat. Plus, I had most of the ingredients. I needed a pastry shell, the sweetened condensed milk and the biscuit mix. Turns out I also needed nuts because all I have, right now, are almonds, but, at the time I made this, I thought I had walnuts.

It's quick to make, but it makes a lot of batter. 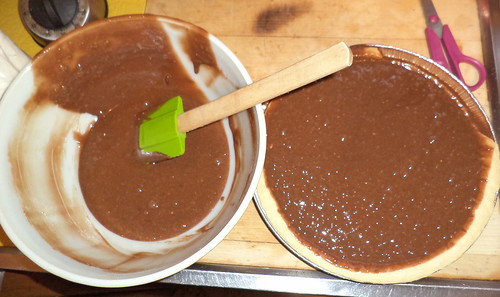 The regular pie shell couldn't hold all of it. If I make this again, I should try a deep dish shell. The excess, I put in a greased glass dish and baked with the pie. 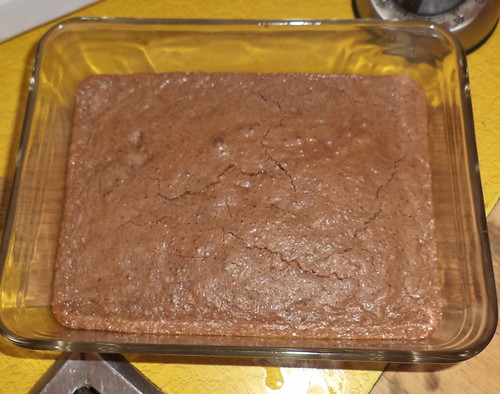 The pie bakes for 45 minutes. I had no idea how long to cook this so I checked every 10 minutes. At 20 minutes, I pulled it from the oven. I should have left it bake for another 10 minutes. While set, it wasn't completely baked and I wound up eating these with a spoon, not that there's anything wrong with brownie consumption via spoon. The pie came out, cooked through, at 45 minutes. 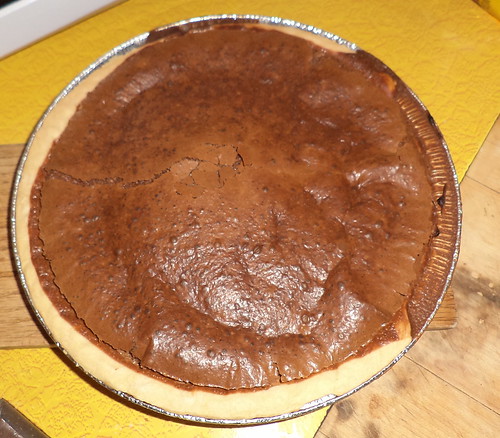 The smell in my house of brownies baking was heavenly. 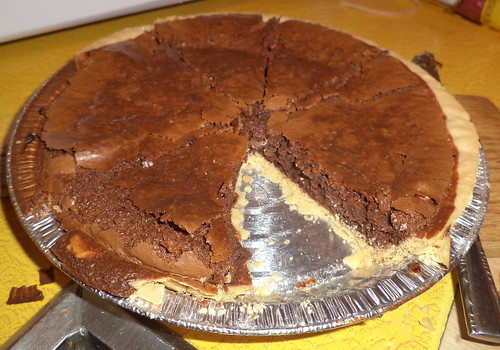 It cut well. The brownie had a nice crust to it. You bake the shell first, add the batter and bake again. I had concerns the shell would be overdone, but it wasn't. 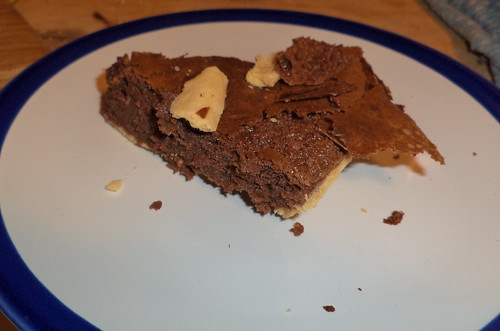 It's very rich. The chocoholic that I am can only eat one piece a day. The batter was scrumptious and I wonder how long it would keep to be used as an ice cream topping. Perhaps that's something for a party. I am not ashamed to confess I licked that bowl clean. The addition of whipped cream was a nice touch, but I wish I had vanilla ice cream. THAT would have been outstanding with a slice of pie.

So, the first recipe in this idea was a success. That got me thinking about the box I have in the home office with all the recipes I've saved over 35+ years. There was a teen magazine when I was growing up, called Ingenue. They gave tips on health and beauty, but also on homemaking and budgeting and living on your own. They were rather ahead of their time back then, not assuming you were going to find a guy and get married and jump into the Ladies Home Journal set. I started collecting recipes back then. I have a couple I still make.

When I moved, the stash went with me. Eventually, the addition of other cooking magazines necessitated a filing system for what I was saving. Enter "the box and folder" system. 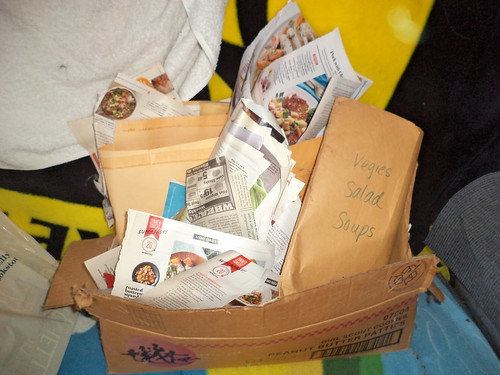 It started out okay. Label the manilla envelopes with categories and then drop the recipe into that folder. Once a month, grab a folder and read through the recipes, picking a few to try. Eventually, I took to just ripping out the pages and tossing them in the box. I don't remember the last time I actually sorted recipes into the folders. Some of the folders were 25  years old and disintegrating at the edges. What if I combined the two boxes?

That's what I did. I happened to have a box the right size for the cut ones. My saved ones are on the bottom, with mom's saved ones on the top. 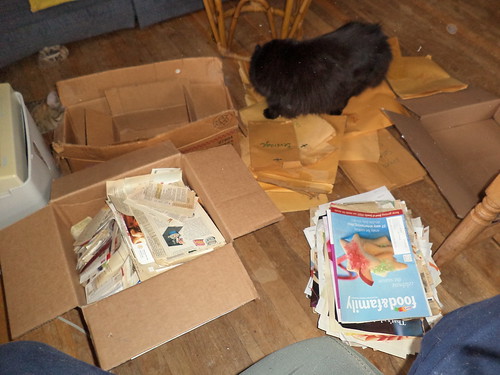 All the single sheets are in a stack, to be gone through, assessed, and the recipe I actually want to try cut out and added to the box. The former box was thoroughly examined but the sides are too high to lie down and rest one's chin on so that box has been deemed "recyclable". The old file folders were sniffed but Pilchard decided she didn't want to lie on those. Her current box is to the right. All the folders have been recycled.

I think this will be a lot of fun. I reduced a mess to at least some containment. I need to buy a cake mix for next week's recipe. I expect there will be quite a few 'what the...' upcoming but that's part of the excitement of doing this. It's going to be great exploring what I, my mother, my grandmother and my aunts thought was so good 20-odd years ago that we saved a recipe. Doing this has already got me cooking supper, too. That alone is a victory.