One of the things I keep telling myself is that I need to eat better. One of the purposes of rummaging in the big box of recipes is an attempt to eat something more than Cheerios, straight from the box, on a Wednesday night because I'm too tired to make anything. We all know there are a whole host of complications which derive from not eating well. But when the amount of energy I have is inversely proportional to the amount of energy needed to feed myself, well, myself gets the short end. I love peanut butter so I have been known to subsist on peanut butter sandwiches for a whole week of meals, just because I have found the best tasting 12 grain bread and a peanut butter sandwich his ridiculously easy to make.

I have stuff frozen, but it's reached the point where some of it is just not appealing. This Wednesday, the day before garbage day, I'm going through the freezer with an eye towards whether I will ever cook and eat whatever this is. It's a waste of money, to be sure, to chuck something you bought, but a freezer burned slice of roast just isn't going to be eaten, no matter how much tomato sauce I smother it with. My goal is to have foods in the freezer which are good for me, reasonably easy to prepare or are part of an upcoming recipe I'm going to try. I found a recipe for salmon and I do like salmon. It's a quick meal to prepare.

I found, in the bottom section of freezer, a package of parmesan crusted chicken breasts. I remembered buying them several months ago. Would they still be okay? There were 2 of them. When thawed, I put them in a dish and baked them for 45 minutes, the last 15 minutes without foil over the top of the dish. For having been frozen for several months, they were very good. I bought a package of instant mashed potatoes and made peas and carrots. I always have frozen vegetables. That seems to be something I'm never out of. 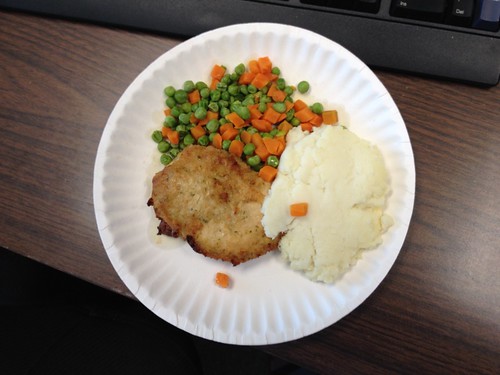 The resulting meal made enough for lunch the next day. I added some garlic powder to the potatoes. I'm not one for mashed potatoes because of all the work in making them from scratch. The instant ones are quick, maybe a bit high in sodium, but were creamy and tasted very good.

So, I did...a...thing. I cooked for myself. It didn't take that long to make a decent meal and I had enough for the next day. In fact, there was more than enough mashed potatoes to add to the left over pasta in meat sauce I had the day after this one.

What I'm trying to do is reorder my thinking on meals. My friend, Emily, spends one weekend day every other week making crock pot meals and freezing them. In the morning, she grabs a meal, tosses it in the crock pot, and it happily cooks all day. At most, she makes rice to go with whatever she's cooked. That's a noble idea and I applaud her for that, but it's not something I will do.

The other component of this is I get paid once a month. I have a tendency to think in month swaths and that mind set is hard to break. Sit down, make a meal plan for a whole month. That sounds great. You only shop once a month. Except what sounds good on the 26th of February may sound horrible on the 26th of March. Plus, if I'm going to add more fruits and vegetables to my diet, which is sadly lacking in them, I don't know of any peppers who last a month in the crisper drawer, or, as I like to call it, the "in-house composting drawer". It would be much better for me to think in terms of weekly or bi-weekly shopping trips where produce is purchased.

I'm such a slow learner. It's going to take some work, on my part, to get this ingrained, but I'd like to have more energy and keep my RA meds where they currently are. That's going to need my dedication to mashed potatoes and chicken breasts.