The last time I had a kitten in the house was back in the late 1990's, when we adopted Betsy and her daughter, Rascal. Betsy had been someone's pet who was drummed out of the house. She took up residence in the wood pile of a former neighbor and had Rascal. We "met" her when she defended her territory from Shakespeare. She was a very loving cat.

Rascal, being born "in the wild", was feral when we came to know her. Through the summer, we worked with her to get her used to people and then to living in the house. We knew she had adopted us when I took Carole to school one day and then set out to do errands. Rascal got out and I wasn't about to chase her down. When I came back, at around noon, a neighbor said she heard a cat meowing at the back door to be let in. I opened the door and Rascal shot into the house, dashing under the bed. She stayed there until dinner, but, when she finished dinner, she went back under the bed. I didn't see her for two days outside of feedings. After that, she came inside when I called.

She had energy, but because a lot of her "kittenhood" was spent outside, we didn't see the bouncing off the wall that kittens do. So, it's come a something of a shock to me how much energy Hamlet has. This was driven home in October when there was an enormous crash in the living room. 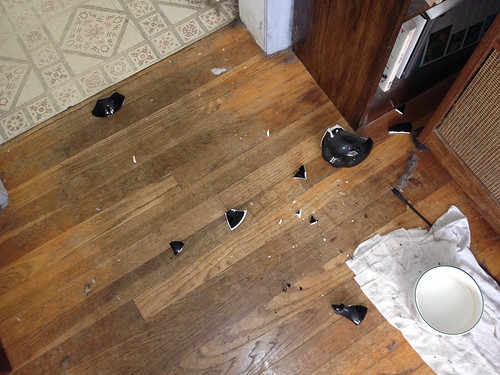 Behold the remnants of a black cat candle holder. He was so scared of the noise and what my reaction would be, he went into the home office and huddled under the cedar chest for a couple hours. This really shattered so I wound up washing the floor, letting it dry and then going over it with packing tape to make sure all the shards had been picked up.

Since then, more things have fallen. I thought I had "kitten proofed" my house but now that he's bigger, he can jump higher. He knows "No" so I can point at him and sternly say it. I wasn't upset about losing this candle holder. I have quite a few. The onus really is on me for not looking around and thinking, "What would a kitten like to knock off because stuff falling is fascinating?"