Of Course I Had to Get Them

I tend to be a suspicious consumer when something is pitched via a side advert on any Internet space where I'm visiting. We all know the algorithms sites use can scrape your viewing and posting information and then tailor those ads to what might be interesting to you. They are as wrong as they are right. Real estate? Seriously? A website which purports to help you evict tenants who don't pay? Does this include stink bugs?

Facebook is horrendous for doing this. I get that this is how they make money. An ad you find interesting where you go to the web site and, perhaps, subsequently buy something nets them a fee for ad placement. Because of that, I tend to be hostile to anything which shows up in my feed. "You paid to place an ad there. If I want your product or service, I'll look you up." Except when this barrier fails.

I was doing alright. Apathetic. Unemotional. And then; well, look. 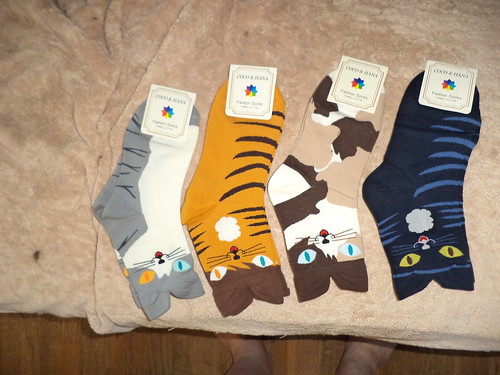 I got suckered in. But come on, how could I not resist? The problem is that, although each sock was listed at $2.00 each, by the time you added shipping and handling, the whole package, and I had to have each pair, although you could buy them separately, amounted to $16.00. That's hardly the advertised price of $2.00 each. I should have known better. But, in my defense, cat socks.

They are, actually, quite comfortable. 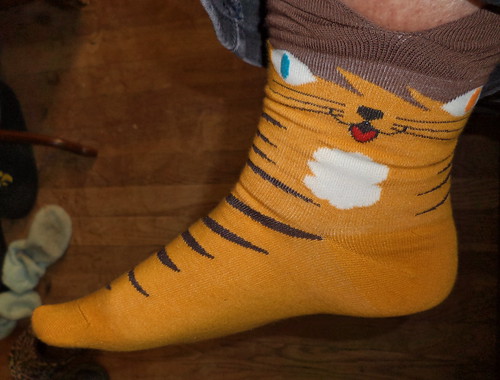 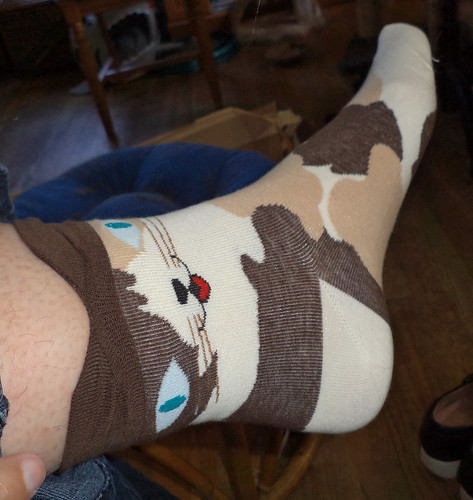 My fat legs tend to distort the face. (Mija socks, above.) 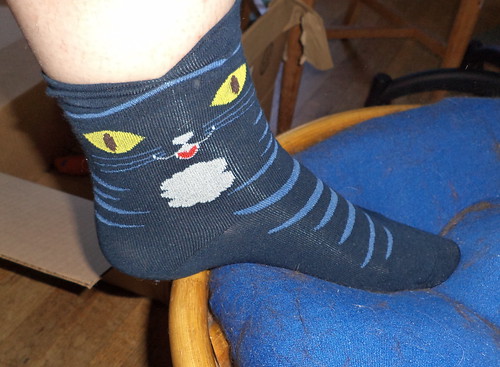 This pair is as close to Pilchard as they got. There aren't any for Hamlet. 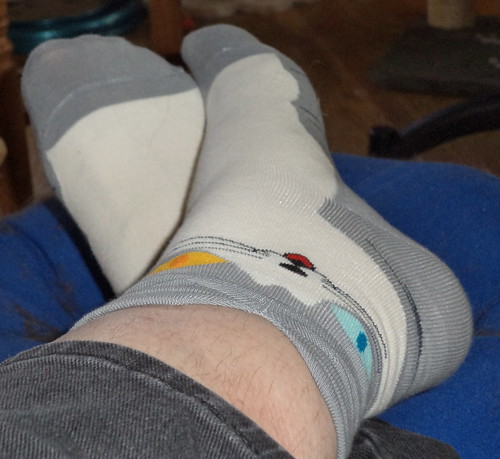 The numerical reality is that the final cost does represent what I think the quality is. They were $4.00 a pair or, we could say $3.50 each if I bought them in the store and paid sales tax. That's about what I pay for good socks. I have some 50 cent pairs and there's usually an issue with the seam at the toe. These don't have that issue.

They were in my feed for about two months during the summer and have since vanished; a reason they are unique. I've never seen anything quite like them and I found myself poking about in some sock websites at Christmas. Getting these also forced me to take a hard look at what I had in the drawer and decide if I really wanted to fix a few of the pairs with holes. I got rid of several whose elastic at the top had broken which allowed them to sink into my shoes.

The bottom line is that I shouldn't be swayed by stuff advertised on social media or on my news feeds. Generally speaking, I'm not. But I've allowed myself this one purchase because these were cats.