One final note on Old St. Patrick's Church. One weekend every summer, the intersection of Adams and Halsted is closed for "The World's Largest Block Party". I remember when they held their first one. It was to raise money to fix something in the church. Membership had declined and the Archdiocese of Chicago was considering closing the church. The block party was touted as a way for the city to recognize the historic significance of the church and to support keeping it alive. I think the party stretched over a weekend. Now, it's just one full day, but proceeds still benefit the church and its attached school.

At the time of the first block party, the neighborhood was crumbling. I'm thinking it was early 1980's when they did the first one. In my 17 years with Vibra-Tech, I've seen huge redevelopment of the area around the church. There are groceries and restaurants and condos. Channel 26, WCIU, is here. Oprah's old studio is a half-mile away. That site is currently being redeveloped. A lot of the seedy bars have been removed. A hotel is going in up the street. Greektown starts immediately south of the church and there are many restaurants which have come into that area.

Across the street is a park. The park contains a statue. 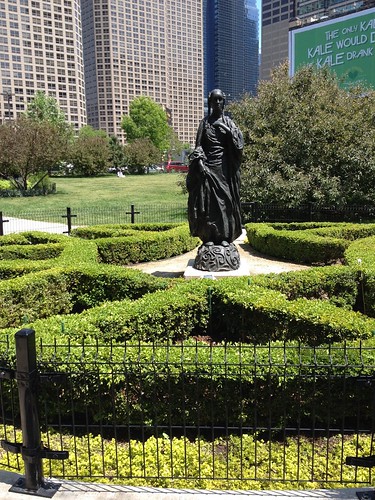 On this day, the benches in the park were full of people eating lunch, reading, listening to music, looking at their phones, etc. 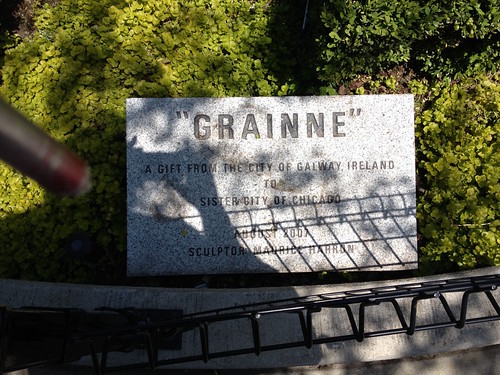 The statue, a gift from Chicago's sister city, Galway, Ireland, is meant to represent the Irish immigrants who left their homeland and came, specifically, to Chicago. These immigrants built and maintained this church.

The green space to the north and east of this statue had children playing. Every city needs these kinds of spaces. There is a parking lot to the north which I can see becoming redevelopment material at some point, given all the construction in the area. But this space won't be developed. That's good.