An Author of Note 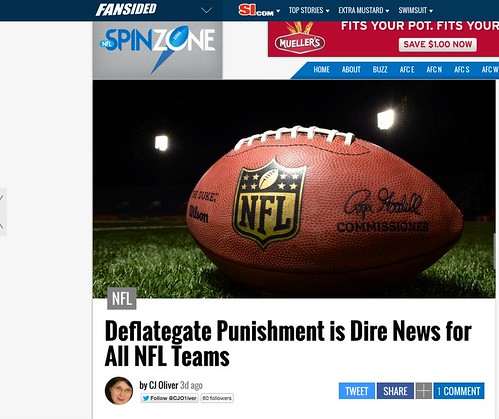 See the photo and the by-line? My daughter is a published author. She writes columns for NFLSpinZone about the NFL. I really didn't realize how much she follows and absorbs and forms opinions on pro-football until I was visiting last October. Get into the car to drive to the wedding dress store and the radio is tuned to NFL analysis. She reads commentary. She follows teams. She plays Fantasy Football and follows certain players. She watched "Game of Thrones", but usually the TV is turned to ESPN or the NFL cable channels.

Her contract calls for a minimum of 5 columns per month. She covered the NFL draft, held in Chicago at the end of April and the first two days of May. Her by-line was on 5 columns in that time period alone. She's on Twitter and is followed by two running backs currently in the NFL. She's one of 2 women on a staff of 30.

The team she was assigned to cover, who needed a writer devoted to them, is the Cleveland Browns. We had a laugh about that but at the time she was getting married, Cleveland changed the team's logo and had a drama-filled end of March with their quarterback hirings. One might prefer to write about a team with very little drama, like the Packers, but it will not be dull for her once football season resumes.

Perks? Well, other than a small amount of cash at the end of each month, which is based upon her following, retweets of her comments and columns on Twitter and Facebook, and turning in her articles, there really aren't any. She doesn't get season tickets or any tickets, really, to the Browns. We won't be seeing her on ESPN talking head programs. I think the biggest perk is the joy and thrill of seeing her name in type and knowing that there are a lot of people reading what she writes.

If you'd like to read what she's written so far, even if you don't care one iota about pro football, you can go to this link. She said they had positions available for people to write about Big 10 football teams, but I would have had to write about Wisconsin or Purdue. Nope, I really can't and my interest in Big 10 football is not as deep as her interest in NFL football. I'm not inclined to do the research needed to write authoritatively about the subject. There are some things I know but that's not one of them.

I am so proud of Carole. She had a very bad 2012 and early 2013. Life has improved exponentially and 2015 is starting off to be fantastic.