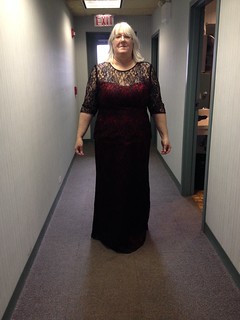 With the sock issue decided, it's time to look at the accessories which will go with the dress. The high neck and the elbow-length sleeves mean I do not need a lot of jewelry to accentuate the look. This is good because I've gone away from that as I have aged. My job is not the place earrings, bracelets or necklaces are needed or even safe. So, for the most part, my collection stays in my boxes. This is one time, however, when I can pull out items in anticipation of the perfect place to wear them.

I don't have pierced ears. I have problems with my ears getting nodules in the lobes, which, on rare occasions, become infected. It's less now than it was when I was younger. I was told accidentally piercing the spot would be bad. Clip earrings were the way to go as a hole for pierced earrings would be closed during these episodes. Even going to clip, I remember sitting in church and having to remove my earrings due to the inordinate amount of pain caused by squeezing one of those infected spots. Hence, my earring case is filled with clips and I have a lot to sift through to make a decision. 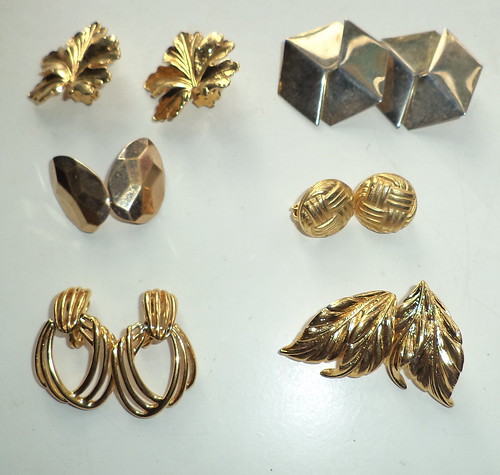 Plain gold in a variety of designs is never a bad choice. 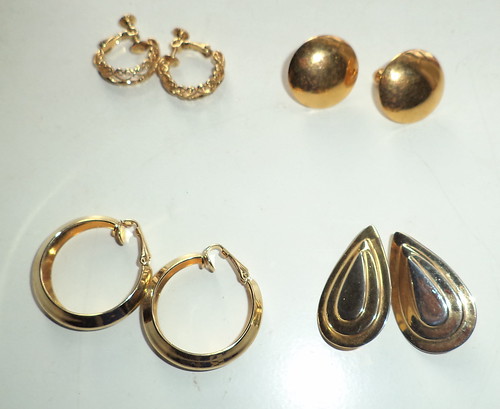 I've ruled out the button ones in the upper right of the bottom photo and the large hoops. The buttons are too boring and the hoops are too big. I don't think I like the 'door knocker' style of the top photo, bottom left, either. 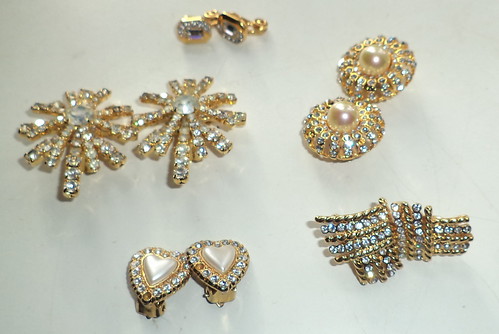 I could go with gold and sparklies. I think the starburst is too big and the rectangles at the top are too small. These are fake diamonds and each of them is missing a small stone somewhere. That might doom their selection although if someone is counting whether I have all the fake diamonds on my earrings, they need to find something else to do. 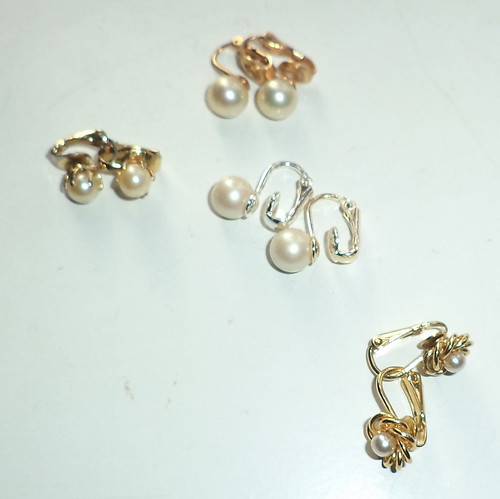 I could go with my fake pearls. They are easy to wear and don't hurt my ears as some of the above can do when worn for a long time. But I think they would get lost in the dress. I'd be better off not wearing any earrings as the effect would be the same. 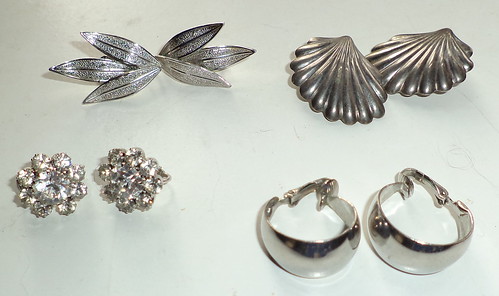 I could go with something completely different and wear silver. The shells would need to be polished. They have tarnished over the years. The leaves were my grandmother's. I remember her wearing them to church. The hoops suffer from blah. In the end, I'm not sold on silver. 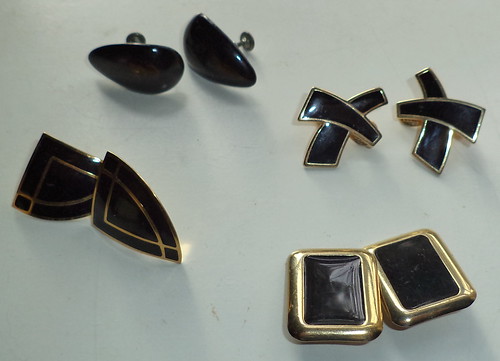 I could go with black. That would pick up the black of the lace overlay. The solid black with the screw backs at the upper left are another pair which were my grandmother's. I don't remember her wearing them, but they were in her things when she passed away. Carole was in 2nd grade so it's a bit of nostalgia to wear something connected to her. Black with gold accents goes with anything, mostly, but I'm not sure about these. 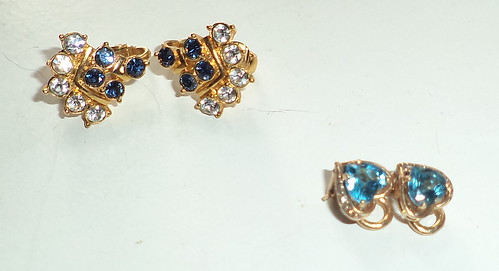 There's color. That's blue topaz and sapphire colored gems in these. I think the light blue would get lost among the dress. The sapphire has potential in that it's sparkly, not too small or too big and the dark blue stones look almost black, which complements the lace. 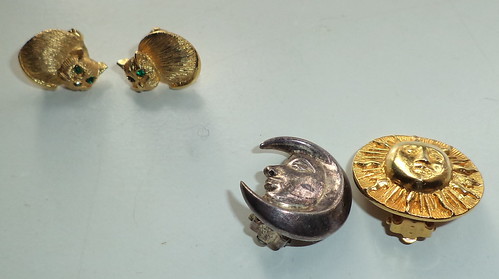 I thought about whimsy, but, in the end, no, these won't work. 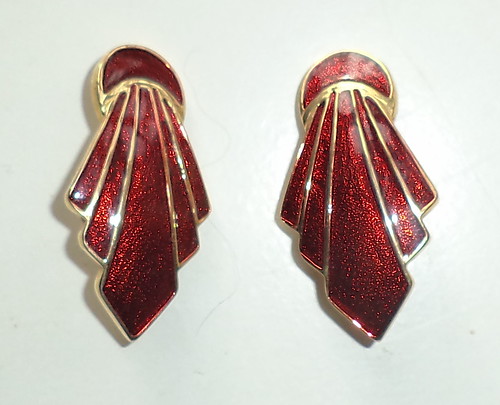 Then there are these. I don't know how long I've had them but they are still a favorite after all these years. I love the art deco style. They are bigger than some, but would not be lost against the dress. I am leaning toward these, but I should probably put them on and see if they really are the ones.

The other thought, when I bought the dress, was that I would wear a bracelet. I thought I had just the piece in the bracelet box. 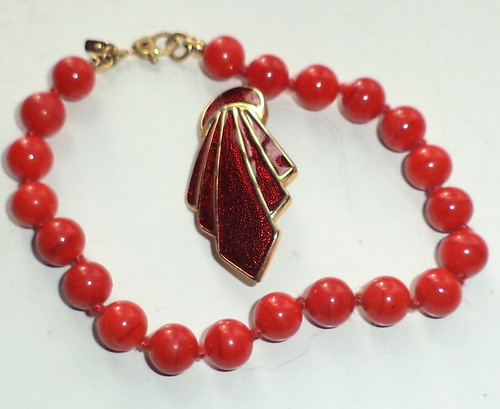 The operative word is "thought". The bracelet is too red. It would not match or complement, at all. 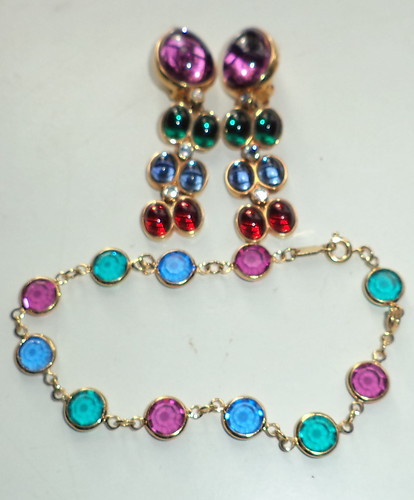 I'm fairly certain I bought these separately and it was just dumb luck that they sort of go together. But the earrings are too big for the dress. The bracelet would work and would add a small splash of color, but I don't really need that. So, I've ruled these out.

As with the socks, I'm going to take several pairs along, even if I think I know exactly what I want. When that day arrives and I'm getting dressed, I may decide that the original "best one ever" is just not right.

Finally, does anyone know where the other one of this pair is? 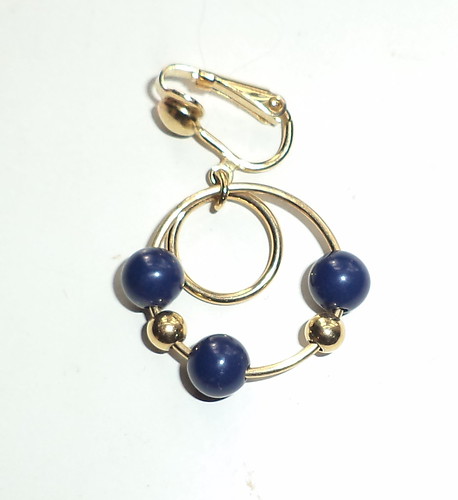 I like the funky design but can only find this one lone earring. Don't you hate when that happens? I need to hang onto it lest I find the companion when I do spring cleaning and move the furniture.