Three weeks ago, NPR had, on their Facebook feed, a recipe for Decadent Chocolate Brownies. The recipe contained ingredients I had on hand, meaning no extra trip to the store. That's always a good thing. I did buy ice cream when I first encountered the recipe, in anticipation of making brownies but didn't make them until today.

It was different. First you had to line a loaf pan with parchment paper. 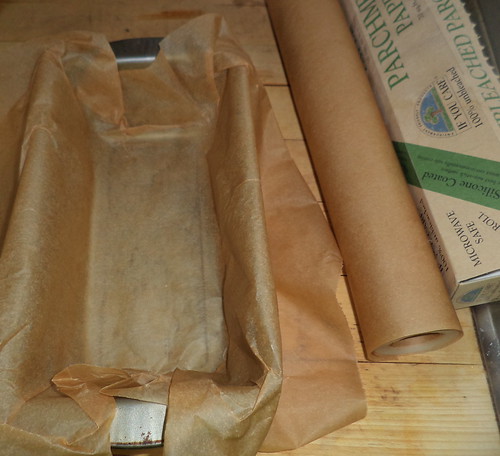 Usually, if you use parchment paper, you also grease the paper. This recipe didn't have you do that. My paper is old. It's been around awhile, but it was still good to use.

I didn't realize this was a loaf pan size amount. That should have been a clue that these weren't your average brownies. I gathered all the ingredients and started baking. Step 2 was to melt semi-sweet chocolate chips and butter. 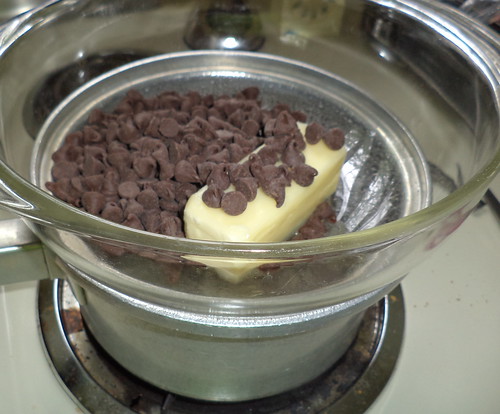 This is what the directions told you to do. Put a glass bowl over simmering water in a pot. It was nice that they didn't assume everyone has a double boiler. I used to have one but I think Carole took the bottom part of it years ago when she moved west. You wind up adding the rest of the ingredients to the melted chocolate so these directions keep the amount of dishes to a minimum. 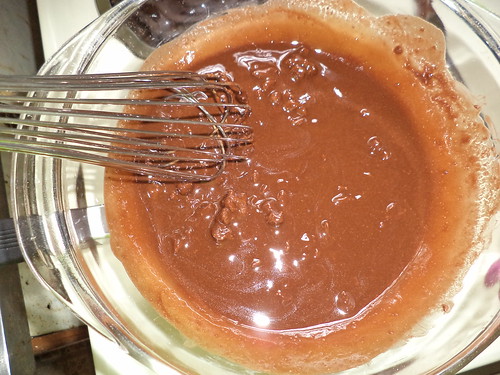 It takes a bit to get it going but once the chocolate starts to melt, you need to continually stir it to keep it from burning. Mmmmmm. Melted chocolate. 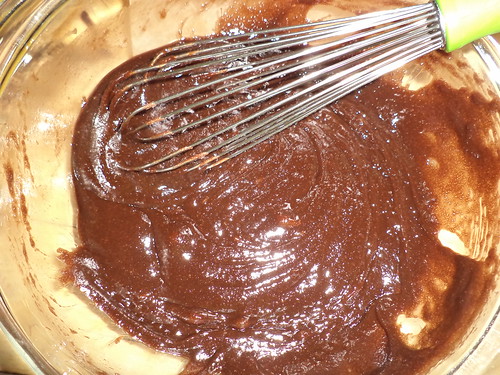 Once the chocolate is melted, you add the other ingredients, one at a time. The recipe called for white and brown sugar. My brown sugar could have been used to pound nails. A quick internet search and I had soft brown sugar. I've put it in an air tight container but the best thing would be to use it up within a month of purchase. Yeah, well, that's probably not going to happen, so I'll go with the air tight container.

This gets poured into the prepared pan. 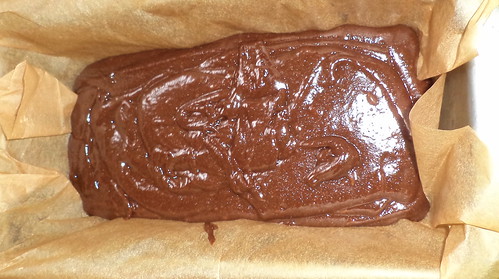 It's a lovely glossy brown, which is what it should look like, but it's not very much. The loaf is put in the oven for 35 minutes. The house begins to smell heavenly. 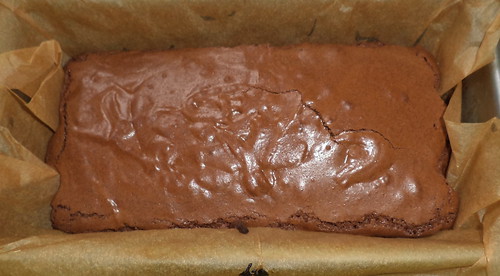 I thought, although my knowledge of brownies told me otherwise, the batter might rise so what I put in the pan might get bigger. It didn't. I have a loaf of brownies. They are cooled for a half-hour and then here it gets weird. You put them in the fridge and chill them further 2 hours. The time at the top of the recipe is not accurate for preparation. It says 45 minutes when that's not even close when you consider 30 minutes to bake and 30 minutes to cool BEFORE sticking them in the fridge. I was beginning to wonder about these.

After 2 hours, I took the loaf out of the fridge and dumped it on the counter, peeling off the paper.

It's a loaf, of baked brownie batter, a loaf. The ends and sides were dry and hard to the touch. I carved off an end piece.

The hunk is soft and gooey on the inside but dry and hard on the sides. I wound up slicing the ends off because I couldn't gnaw through them. 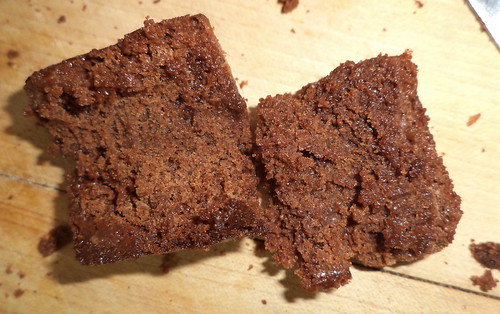 Perhaps raccoons would appreciate these, but I haven't seen a raccoon since last fall so I don't think I want to tempt them back. I was very disappointed by this because it's a half-inch of brownie no one can eat. 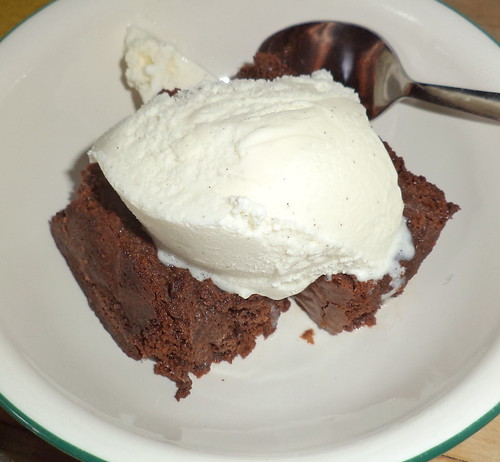 How does it taste? Well, if you can overlook the dry, crusty, exceptionally hard ends, they aren't bad. I warmed up a chunk and it went very well with vanilla ice cream. But, the bottom line is this is an awful recipe.

I saved the rest of the loaf and will see how it fares. I put it in a freezer bag and stuck the bag in the fridge. Will it dry out quickly?

I have other brownie recipes with a couple more ingredients or a few more steps that make better brownies and more of them. I am certain you can type "Brownie recipe" into any search engine and get a recipe that even a beginner can make. The ones made with cocoa can be just as rich as melting chocolate and butter together. This was a huge disappointment.