It's one thing to drive into the storm. The horizon gets dark blue black and you know you're in for a ride. It's another thing to see it creeping up on you. Such was the case on Thursday. 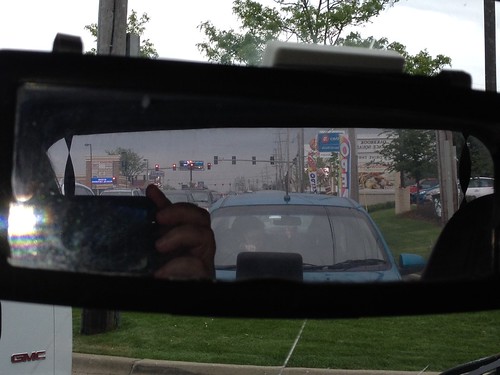 My friend, Terry, was in town on business so we managed to find time on Thursday night to get together for dinner. I got into the Jeep and headed east. Traffic. I didn't realize the Chicago Bulls were playing their last game of the season (They lost and so are out of the playoffs.) in Chicago. Traffic within 10 miles of the United Center crawled, at best. While at a stop light, I did more than just glance in the rearview mirror. The radio report was, "We're tracking a line of storms with potentially high winds moving east through the Chicagoland area." As if traffic wasn't moving well now, just wait until the rain comes.

It avoided me. I drove through some sprinkles, but the heavy rain, the stuff I can see in the rearview mirror, went around me. Later, during the evening, when we were eating, it rained heavily, but that, too, was gone by the time we left the restaurant and I drove home.

It needs to stop raining for a week and some of this should go to the southwestern US where it's desperately needed.