If everyone invited had come, we'd have had 54 people in the basement of the dentist's office in Center Point. As it was, 32 people attended. It was entirely family, but that's the way mom wanted it. It was enough to get her to agree to being recognized in the first place so if the only people she wanted to invite were family, that's who got invitations.

Toward the middle of the open house, we set fire to one of the cheesecakes and made mom blow it out. 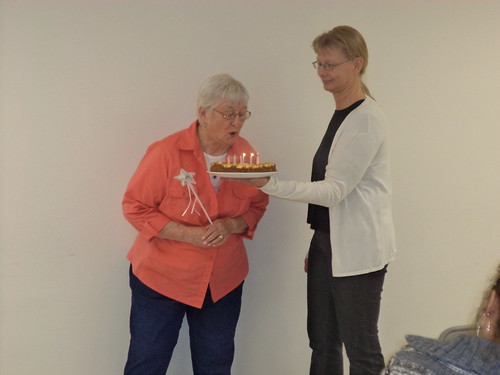 The oldest great-granddaughter gave mom a wand and a crown.

Toward the end of the event, we had to take the obligatory photos. There's us kids. 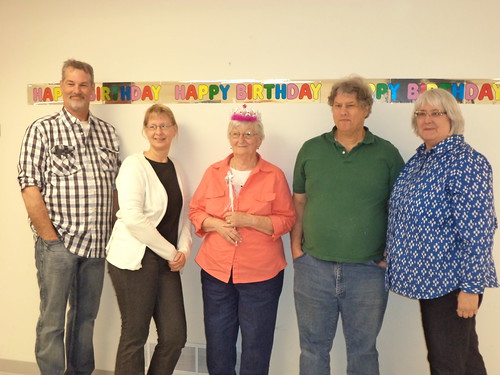 It took a little convincing, but grandma wore her birthday crown. Here are my brothers and their spouses. 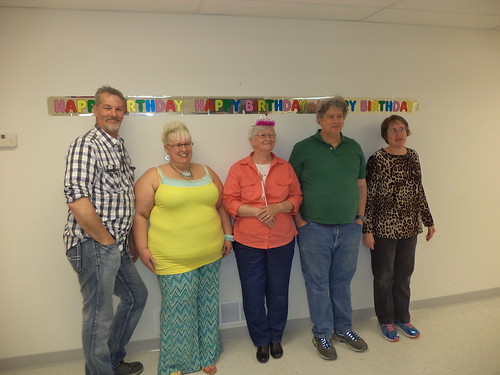 Then there are the great-grandchildren. My oldest niece, Christina, gave birth to her 5th child, Adalynn, the day before the party, so she wasn't in attendance, although my brother brought the other kids. 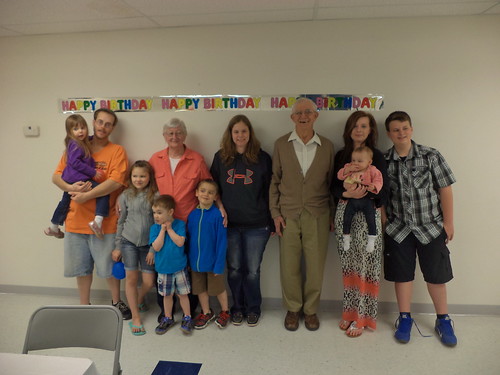 My other niece, Amber, came with her husband and daughter. We count Mary's two kids, on the right, as part of the family, too.

Once this was done, it was time for the extended family. Probably one of the best reasons to have a party like this is that you get to see the cousins you grew up with. 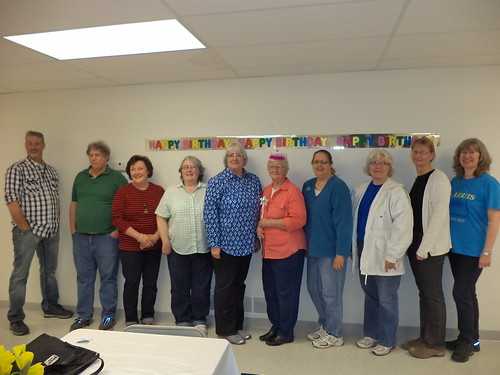 We spent a lot of time remembering the big family gatherings we used to have. Our 4th of July celebrations were originally at Ken and Effie's farm. But, when my mom's generation started having children, the sheer number of people running around proved to be too much to host, so we moved to the city park. I have just a couple of memories of July 4th on the farm; fireworks set off in the corn field by my great-uncles and ice cold Nehi soda pulled from a steel cow trough full of ice. There are far more memories of the time at the park and then going to the Monona city fireworks display.

We talked about our genealogy, what we knew. Of course, we regret that we didn't ask our parents more questions when they were alive. My dad had 6 siblings. Only the oldest is still alive and she has dementia. Of the 6 spouses, only 3; mom and Aunts Dorothy and Audrey; are still alive. We cousins know a lot and it was wonderful to share things, but there are things we will never know. That is, perhaps, the nature of existence. 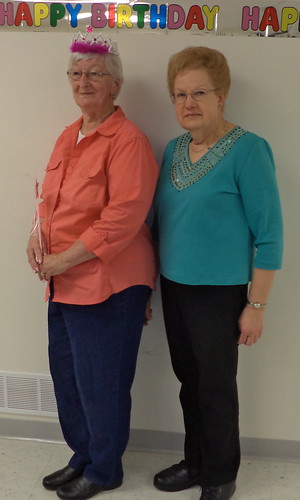 Here is mom and Aunt Dorothy. I swear. Aunt Dorothy simply hasn't aged. She looks just like I remember her in my youth. She just laughs when you say that to her, but it's sure the truth. Some people have really good genes.

Once we got home, got things put away, food frozen and could sit, mom allowed that this had been fun. It was nice to see her as the center of attention.