Almost everything is planted and the overwintered geraniums are outside. This has been a good week to move them as we've had 3 days of soaking rains and then warm temperatures with mild evenings. The screens were put in the windows yesterday and stayed there all night. When I'm lying awake, waiting for sleep to overtake me, the sounds of the evenings take me back to the summer visits with my grandmother. She was a difficult woman to get along with but staying with her for a week in the summer was always a highlight.

Winning those two large containers sort of imperiled my desire to weed out my pots to just what I'll use because I ordered plants from a company who sent me a catalog this year. That box arrived a week ago on Wednesday. 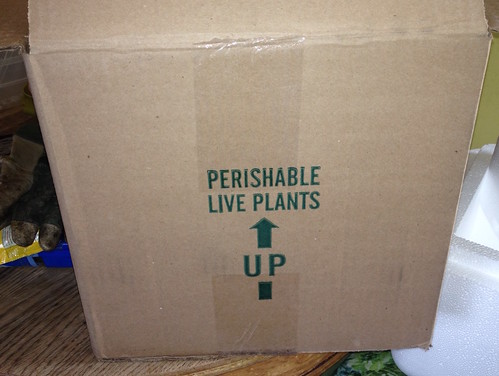 They are called Select Seeds and one of their "hooks" is that they have heirlooms seeds as well as live plants for sale. I rather liked the idea of spending the money I would usually fork over at a catalog which would deliver. I'd not have to battle crowds for begonias or buy more than I had budgeted for. Because I was cutting way back, this seemed, to me, to be a better use of my time and my funds. I hadn't counted on two 5 gallon containers of plants.

Here's the box of plants. 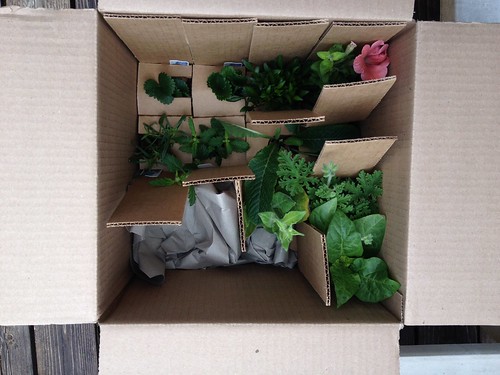 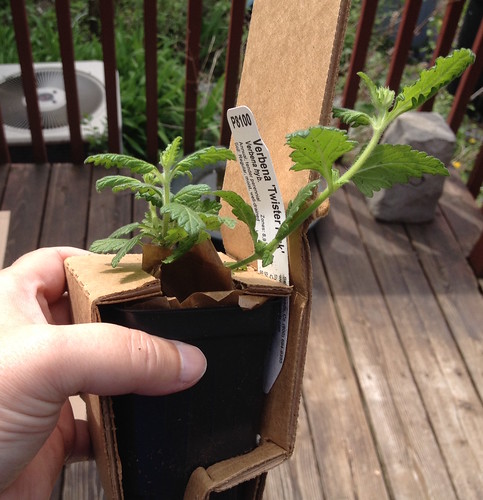 The whole thing is recyclable. I very much appreciated that. The plants were healthy looking even having been left in the box from Wednesday through Sunday, when I planted everything.

I pulled everything up close to the deck and started with the the hanging planters. I wasn't sure what I'd find in the big containers but, to my delight, the plants in them came out easily. The containers had several which draped over the side and I got a couple of sweet potato vines for good measure.

I realized that the dirt in the bottom of the planters was hard so I spent time breaking it up in the hopes that the plants develop a deeper root system. I need to remember to do that every year. Plants always look so droopy when you put them in the container where they are going to go. But after 3 days of rain and a bit of fertilizer, they have perked back up. 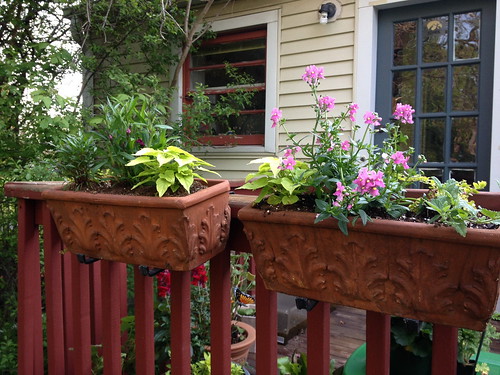 I like vines or flowers to trail down the sides of the planters. We'll see how this goes. Did you know that given the right amount of fertilizer and water, that decorative sweet potato vine will actually produce an edible tuber? It's yours if you can get it before the squirrels do.

Gradually, things came together. In the end, I only had to pull out 2 extra pots and I need to go back and get 3 more begonias as I underestimated the size of the pots for the front steps.

The plants I like so well, the ones with dark colored leaves, are lettuce. Once I pulled them from the pots to replant, it was clear what they were. It's getting late in the season for lettuce, but I could, if I wanted, sheer part of them back for a salad. That made me chuckle.

As I was finishing up the planting, the sky darkened and the rain began to fall. I moved all the pots from the railings to the deck floor to prevent them being tipped over by high winds. On Monday, I brought out the geraniums, removed all the dead leaves and bracts, fertilized and lightly watered them. They got drenched from Monday through Wednesday morning. 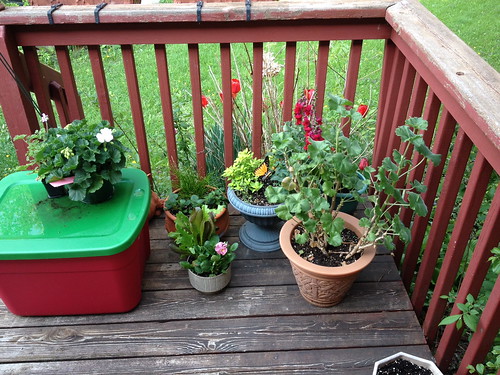 Another year and another batch of happy geraniums. I also scrubbed the birdbath clean. Lordy was that gross. 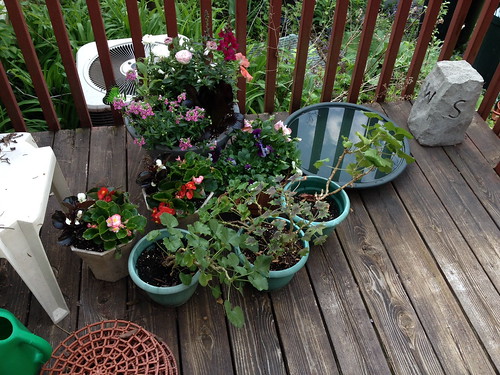 What's left now is to move the white geranium on the cat house to the pot where my ancient and spindly white geranium is. Next to the white geranium is a rose colored scented geranium. I'm going to add it to the pot of another of the ancient ones. The geraniums were the plants most affected, last year, by the ground squirrels. There was a lot of open space at the top of the geraniums so my hope is that packing the pots with plants will deter those rascals. I also checked my cayenne pepper stash and we're good for another year.

Finally, I added flowers to the pot by the deck stairs. 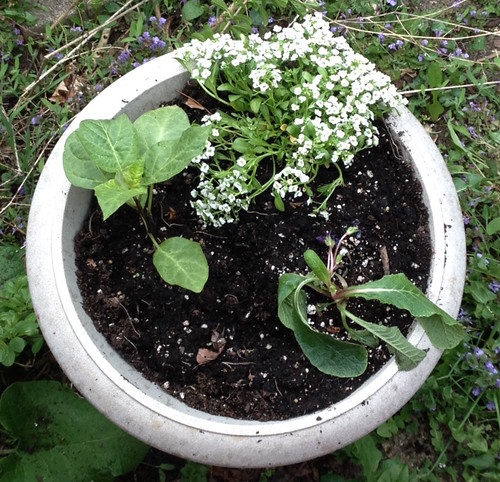 One thing I went with this year was upping the fragrance quotient of the deck garden. I know the bees can smell stuff, but I wanted to be able to smell things. So I invested in some plants that emit odors.

In the white pot is a datura. First of all, this is poisonous. Never, ever have it where chewing children or pets or adults, for that matter, would want to experiment with the leaves. That's why it's in the pot at the foot of the deck stairs. My girls don't chew on stuff on the deck. When I got them cat grass, they looked at it and wandered away. But it can't be planted in soil you intend to use for growing stuff. If I decide next year I want to put sweet potatoes in this planter, all the soil has to go.

I've had daturas before. They emit their odor at night when the trumpet-shaped flower, which is huge, by the way, opens. The ones I've had before were white or creamy white. This one is white, silver, bluish white and purple. These can be the size of small shrubs and we used to have some that were self-seeding. We'll see about this one. I added alyssum and a low growing primrose to the pot. They should keep the ground under the datura covered which will mean less watering. The primrose was one plant that looked a bit wilted when I pulled out it out of the box. I noticed last night that it has small flowers on it already.

The geranium is used to scent rose water and potpourri. You do have to actively crush the flower pedals to release the smell. There is a phlox, Midnight Candy, another scented plant. It's a bit different from the phlox I have in the front. The ones in the front aren't scent producers so I have high hopes for this plant.

I like nicotiana, Line Green, and the color of this plant caught my eye. This is another poisonous plant. I have it mixed in with shorter plants and the dark red snapdragons which were in the containers I won. This one blooms in the evening. To go with the nicotiana, I got a coreopsis, Little Penny. The photo shows the blooms to be the size of a penny, but there are plenty of them. I'll need to sheer the plant for a season of continual blooms but I thought the juxtaposition of color between the green and the coppery-red would be striking.

A trailing plant for the pots is the petunia, African sunset. It's the one you see blooming in the box. It's a lovely light coral color. I probably should have purchased more than one plant, but I'm giving this company a try first. Then next year, if the plants do well and look good, I can come back and get more than just one. The verbena I'm holding above is called "Twister Pink". This is another riot of color and I'm all about color on the deck. It's also a trailing plant and it's in the hanging planter.

Finally, for something completely different, I ordered three container strawberry plants. Who knows if this experiment will yield anything but having a handful of fresh strawberries on a Saturday morning in June was too good to resist.

I will move things around come the weekend, when I can spend time putting pots in places, standing back and saying, "Nope. That doesn't look right." I have to bring up at least one other deck chair. I was going to move the cat house to the basement, but with the possibility that it may be used, I won't. The whole desire is to make the deck an inviting space. We'll see how this year's deck garden works.