One of the delightful things about going to visit Carole is seeing how long it takes Faux to remember me. I think it was 2 hours this time. I got a tour of the house and then we sat down to play Star Wars Trivial Pursuit and, well hello there. 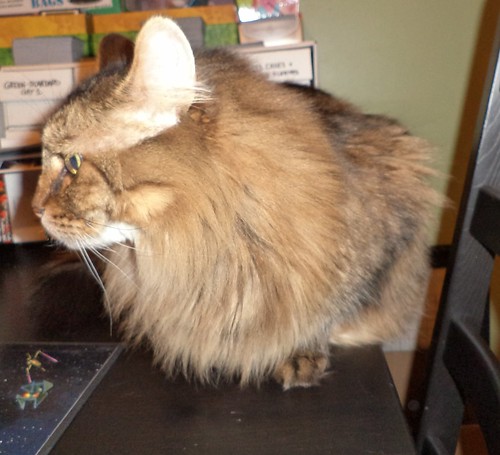 He wanted on the table because that's where the action was, but allowed an ear scratch and gave me a kind of "I know you" look.

He's so happy at Larry's house. This cat, mellow and reasonably calm as a breed, (He's a Maine Coon.) has traveled from Illinois to Washington state; moved 3 times in the Seattle area and then moved across country to Connecticut. From there, he moved to Virginia and has moved 3 times since coming to Virginia. Back in November, when Larry and Carole were going to Walt Disney World, Carole brought Faux to Larry's house. Larry's dad was going to look after him. As she was going to be moving in with Larry once her lease was up in April and would be spending most weekends here, she left him here, rather than drive to and from Richmond, where she lived, with a cat in the car. Faux seems to know this is a mostly forever home Unless they decide to buy a house elsewhere, this is where he lives.

Larry loves this cat. He doesn't like him or merely tolerate him because he's Carole's cat. He genuinely loves Faux. Larry grew up with cats so that helps, but Faux is a lovable cat. Larry spent the winter and spring getting to know Faux. He also trained him. 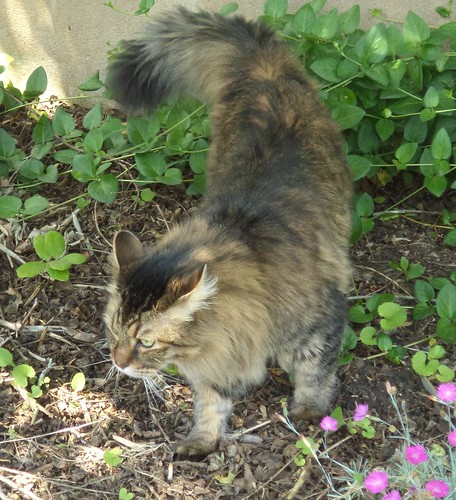 Faux loves to go outside. They watch him because Larry lives out in the country and they have foxes and opossums and raccoons and deer and neighbor's dogs. But Faux is also trusted to not roam much and he doesn't really. Larry trained Faux to go into the house immediately, when Larry stamps his feet and says, "Faux! House!" It was quite interesting to watch. Sometimes Faux will do it when Carole stamps her feet. Other times, he'll just look at her. I didn't try it. When Larry stamps, Faux moves. So, having a place to live where he won't be moved in another year has helped make Faux mellower.

The other things is that he got a brother. Meet Tobey. 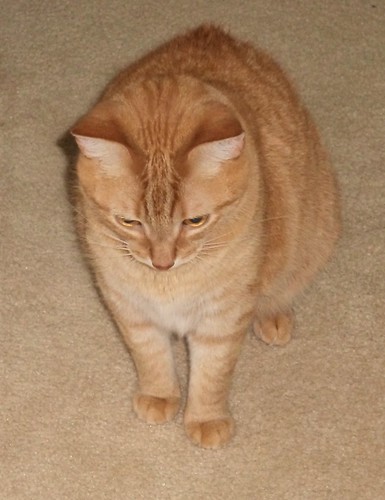 Tobey lived with friends of Larry and Carole and was the youngest cat in a 2 cat household. When the older cat went over the Rainbow Bridge, the friends decided to replace the cat with a dog. This dog would not leave Tobey alone. It barked at him constantly. Tobey had to stay on the top of his cat tree because, if he would jump down to go use the litter box, the dog would attack him to try to play. Tobey was increasingly depressed and it was clear either the dog or the cat had to go. They opted to try to find a new home for Tobey. Carole took him.

There were concerns. Tobey is just a couple years old and Faux is nearly 8. Faux has been an only cat for all but the first 9 months of his life. Introductions needed to be done slowly. 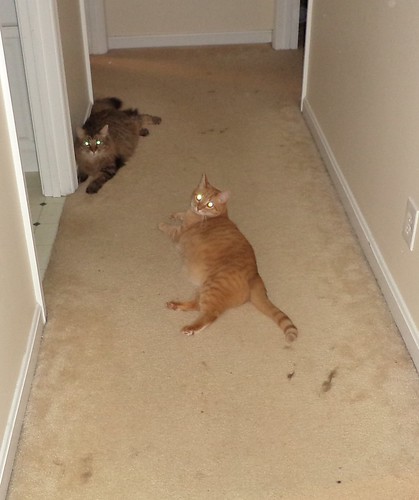 Carole said they "met" accidentally about a week after Tobey had moved in. There was the usual hissing and growling, but that lasted just a few days. They are buddies now. The above is where you can usually find them; Faux on one side of the hallway and Tobey on the other or in the middle. They chase each other at 11:30 p.m., which seems to be a universal time for cats to tear around the house madly. They play tag and I heard the familiar "thunk" of someone hitting the floor as the other tackled. Tobey is about the same size and weight as Faux so they are evenly matched.

Tobey knows that Faux is "top cat", but Larry and Carole have gone out of their way to make Tobey feel welcome. He's still a bit skittish and was scared of me for the first couple of days. Then, one day, I had to walk from the guest bedroom, which is to the right in this photo, to the guest bathroom, which is the doorway on the left and I had to step over Tobey. He tensed up and I thought he was going to run, but he didn't. After that, he seemed to sense that I wasn't going to make him move unless he truly was in the way. Lie in the middle of the hallway? No problem. I didn't want to walk there anyway. 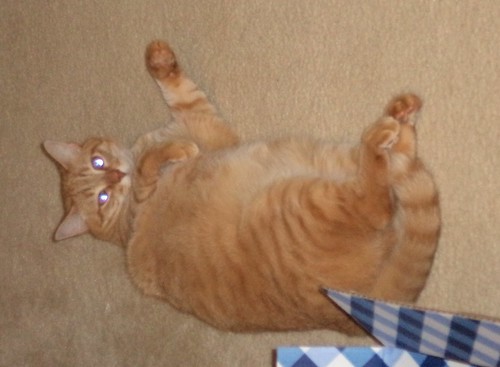 On the last day of my stay, which was a day to just relax at the house, Tobey came into the living room and lay down. He seems to know this is his forever home, that he's not going to be moving anywhere else. As I sat in a chair reading, he rolled over. 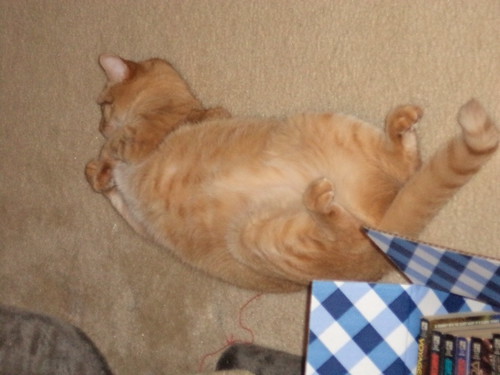 This is trust. My girls won't do this and they have lived with me for nearly 5 years now. He let me scratch his belly for a bit. He's not real keen on being picked up, something Carole is working on with him. He loves to jump up into her lap when she's on her computer and lie down. He will drape himself over the arm of her recliner when she's watching TV. And having a brother has made Faux that much more mellow. He clearly enjoys sharing his home and life with another cat.

Yes, I did come back with some new smells which probably played a part in some misbehavior on the part of my cats last week, but I got my kitteh fix. And I want to mention that they agreed to take Tobey because they wanted to give him a good home, not because he matched the carpeting.