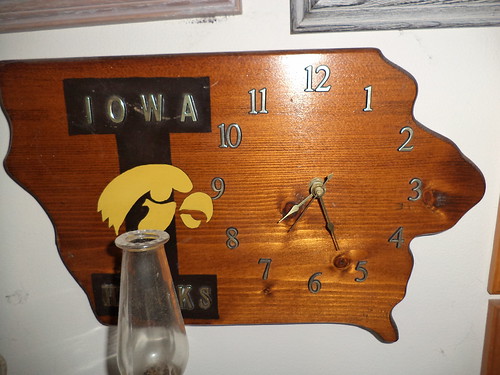 I mentioned earlier this year that this clock had ceased to work and that I would need to replace the clockworks to get it running again. It has a distinctive "tick tock" to it which was was so used to that the only time I noticed it was when the power went out. "Ah yes. The clock still runs."

Well, that ceased. It was low on the list of things to do, to fix this. As a visual piece of art, it still had a place on my wall. A number of you probably have a clock inherited from some long departed family member, a clock that doesn't work and you're not sure how to make it work. An aside, the digitization of everything has left clock repair people in extremely short supply. Can you even train any place to fix grandfather clocks? How sad if you can't get great aunt Tillie's clock fixed. It becomes, like the one above, an art object.

In spite of knowing that it wasn't working, I would still consult it every day. It's right twice a day, even if the hands are frozen. So, imagine my surprise when, about mid-May, I was reading and heard the familiar "tick, tick, tick" of the clock. I looked at the clock and darned if the second hand was moving. I grabbed my phone and, wonder of wonders, the time was even correct.

I swear. Unless I'm sleep walking, and I've not been known to do that, I didn't do anything with the clock. Nothing. Not one thing. With a vacation upcoming, I decided fixing it would wait until I returned. The only thing I didn't like was that every other clock in the house is electrical, excepting my cell phone. If it's 12:35 a.m. and the power goes out, finding my cell phone at the bottom of my purse isn't a guarantee, either, and, knowing me, it's liable to be dead because I forgot to put it on charge. I have no clue what happened.

Since this time, it's stopped and started and stopped and started. The time on it is about 35 minutes later than real time. But it's working. I should replace the mechanics. Then I know it's keeping proper time, but being a half hour early for something isn't necessarily a bad thing. Perhaps I just like the reassuring "tick, tick, tick".