Holding down costs is a major struggle at any company. Mine is just as concerned with expenditures versus intake as any other company. You make do and make do and make do. Sometimes, employees can see cost benefits to spending a few more bucks to upgrade with the knowledge that new can make you more efficient. Maybe there has to be an outlay of a couple thousand dollars for better and more efficient hardware. In the end, the hassles of work-arounds to use the old are just not worth it.

Windows XP has been the operating system of choice through three company IT guys. While I prefer Apple computers, I'd learned my way around the operating system. I'd also learned the quirks of my circa 2007 computer. There were only so many windows I could have open at once before the whole thing froze and I'd have to do a restart. Saving word documents would, on some days, be a hit or miss affair. I had myself trained to save every 15 minutes because the previous 15 minute save might not have happened. I think we all had some virus or malware on our computers in spite of our best efforts to keep them clean. We'd long complained that getting new computers would greatly speed up productivity. But the company didn't want the huge expenditure.

Microsoft sort of forced us to examine our computing capabilities. With the cessation of support for XP, the company had to decide what to do about computers. The decision was to upgrade everyone. I went from this 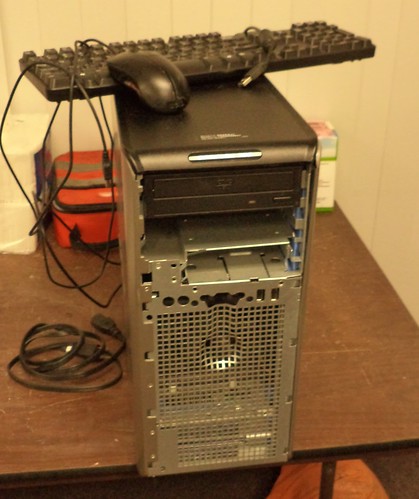 which had 2 damaged disc drives and a bent front panel that we removed so I could turn the thing on, to this. 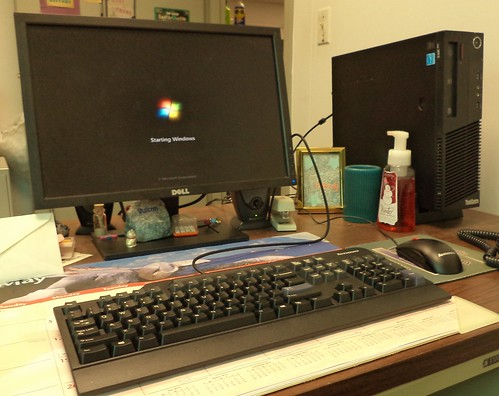 We got new keyboards and mice, too. Fast? It's not as fast as my mac at home, but compared to what I was using before, I've gone from a bicycle to a car. The best part is being able to keep multiple windows open and know that my computer won't suddenly crash. The only downside is that the hard drive sits at an angle. I kept the hand soap, the picture Patt made for me and the fake candle on the top of the other drive, since it was flat.

We're using Windows 7 which is just different enough from XP that I still can't quite find all the things I know are on here, but then, I don't use all the mac's bells and whistles. I know what I want or need to do and I can do those things. Perhaps there are faster computers out there, but I'm happy to be computing as one does in 2013. It's a huge step up from 2007.