I try to make time for blogging but, sometimes, my time is not my own. I've had a lot of things to do lately so although I have posts in mind and a lot of photos which scream "Blog about me!", that's as far as it gets. And then Mother Nature tosses a curve ball and, well, I think it was John Lennon who said, "Life is what happens when you were making other plans."

I had to go into the city very early last Thursday. We had a huge job which I needed to help do installations on. It was really cool in the city, and I don't mean temperature, although that hovered around 62 degrees. The fog off the lake was thick, like cotton. I love fog. I have photos. I'll get around to posting them.

Anyway, there was a phone call about a meeting Thursday night for this society to which my company belongs. My boss sighed and asked if I would go. He was too tired and he's got a 3 year-old who is being, well, a 3 year-old. Sure. It's overtime.

We've been going through a period of unstable air. It doesn't feel humid but the air is coming from the Gulf of Mexico and mixing with cool, dry Canadian air and we're seeing a lot of rain and thunderstorms. I kind of forced the meeting to break up when the setting sun suddenly disappeared behind a wall of blue black. I wanted to be home. Pilchard hates storms so I really wanted to be there for her. I managed to get home about 10 minutes after the line came through. Plus, I had been up since 5 a.m. I was tired and driving in a pounding rain was not my idea of fun. I got soaked running from the car to the house, but no matter. I was home.

The storm lasted about 30 minutes. I gave it another 10 minutes and logged onto the Internet and into World of Warcraft. I had a nice conversation with guild members until the corner of my left eye registered flashes. Uh oh. Another line of storms was coming. I decided the better part of valor was turning off the computer while this next wave passed.

The computer was off. I turned to my left to turn off the floor lamp. I have a lovely view of my backyard from my home office windows. Suddenly, there was a blue-white ball of light in the middle of my back yard. It had a band on the top that was snow white and a band around the bottom that was blood red. The rest of it was a swirling blue white. It looked like Sauron's eye, without the eye part, or a portal that you'll see in a video game. There was a sound with it like the sound of that firework which will be shot into the air before fireworks to let people know the show will start soon. I think it's an M80. It shook my house. It was all over in a split second. I can still see that swirling blue ball in my memory. It was about 3-5 feet in diameter.

My house never lost power, it didn't even blink. The neighbors behind me, however, lost power. In fact that whole west side of my block was without power after this. The flash was so bright, the street lights on either side of me went out. They came back in about 5 minutes.

I just sat here, blinking at the back yard. I thought to myself, "Ohhhh....kay. I'm just gonna go read a book." I turned off all the lights except the bedroom light, grabbed my book and read 3 more chapters before calling it a night. In the morning, I went into the back yard. No sign of anything scorched, nothing. I was pretty sure it had been ball lightning, but I was very surprised there was no sign of any scorching.

Friday, I come home from work and try to log onto the Internet. Nothing. I realize that my modem/router has no lights on it. The phone runs through the router so I have no phone either. Mike, the nice guy from AT&T who helped me was thrilled with my story. He is writing a book about lightning and said it was ball lightning. I called the meteorology department at College of DuPage and the student I talked to said it sure sounded like ball lightning. It doesn't usually leave scorch marks, either. It's a spot of concentrated electrical energy released. Well, this is all nice, but I want my phone and Internet back. AT&T would have someone out on Sunday.

Joe came out on Sunday. Step one is to make sure the signal is getting to the box. Because wasps like to nest in the boxes, he opened it up very carefully. 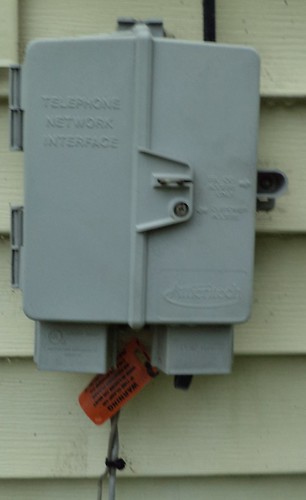 Looks pretty normal, doesn't it? This is what we saw when he opened it up. 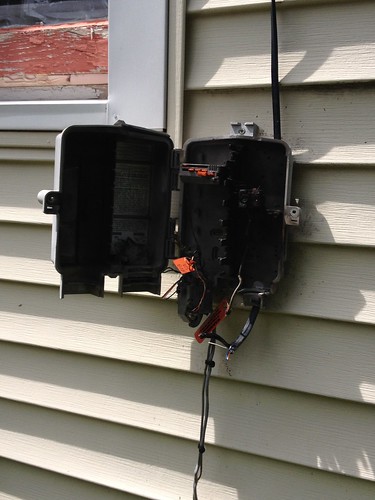 Lightning had traveled down the phone line and into the box, completely frying the contents. It's charred. The wires inside are all fused together. The box acted like a ground, however, and the energy never went into the house. The modem/router took a surge and the power supply was toasted, but my phone, my computer, my TV, my electrical is all good. There is also no fire or scorch marks inside. I have had my miracle for this year and I'll take it. He jokingly said, "A new router isn't going to connect you to the Internet." Ya think?

The problem was that the pole where the phone line comes off was energized or "hot". Com Ed, our highly responsive electric company, and yes, that is sarcasm, needed to come deenergize the pole before AT&T could climb it. I was going to need a complete new line from the pole to the house, as well as a new box and he felt they should just string a new line to the office. He said I'd probably need a new modem/router, just to be safe. But, there was nothing he could do on Sunday until the pole was deenergized. He put in a ticket, took some photos, and we began the waiting game.

This morning, when I still didn't have phone or Internet I gave AT&T a call. Customer service was very apologetic. She couldn't see the status of my ticket, but she gave me a $35 credit because of lost service and a $25 Visa gift card. That will buy a number of lunches. She also said, "You don't have line insurance. I know it's at your discretion, but if they are telling you they need to string new line, you need to get this insurance. It's $6 a month and it means that if any line needs to be replaced, we do it for free. Otherwise, you're paying $93 an hour for the tech to be there. I'll make it retroactive to Thursday, when the lightning hit." I usually get upset when something is pushed like that but knowing that I would have to have a new line, I jumped on getting that. I can always call and cancel it, but it will have saved me a lot of money.

I called tech support and they had not heard from Com Ed. Also, my ticket was not expedited so that a tech would check on the line on Monday. So, the guy did that and Sherwade was at my house today at 8:45. Com Ed had done their part so he strung a new line to the house, installed a new box and ran a line directly to the office. No going through the basement with a phone line. He was at the house for 90 minutes. At $93 an hour, that would have been a bank breaker. It won't cost me a thing.

In a case of "some days you're the pigeon and some days you're the statue", the tech had finished everything, cleaned up and had just pulled away from the curb and ... the power went out. Seriously. I thought about running after him waving like a maniac, but, instead, I called Com Ed. As I was explaining to the gal what had happened, she said, "Oh ma'am. I see that 1700 people around you are without power. It's not AT&T or you." According to the flashing on the clock in the bedroom, power was restored about 45 minutes after I left for work. 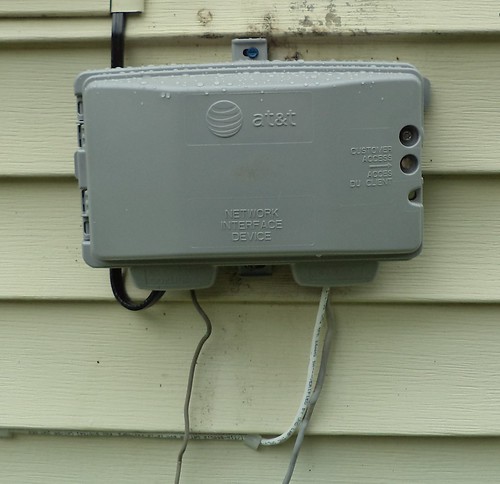 Here's the new box. The tech said it's less wasp permeable. The brown on the siding is from the lightning. My vinyl siding probably helped prevent a fire, too.

I missed an eye appointment because I couldn't get the voice mail notice and I didn't know how to get my voice mails by calling in from another location. (It's also my fault for losing the card on which the time was written and not calling the clinic to verify the appointment.) I spent the weekend and the first 2 days of this week reading, cleaning, writing a letter that I discovered I couldn't print because my printer is hooked up, wirelessly, to the computer through ... the dead modem. /sigh I also finished the stitching on a wedding present. Now to finish the sewing on said present. I also cleaned. There is value to being without this modern contraption.

The tech said today that this end of spring beginning of summer has been horribly rough on phone and Internet. "We'd rather be out doing installations. Instead, we're climbing poles and doing repairs." I guess it's the price we pay for living in the Midwest.

So, I'm back. I have a lot of blog posts to get done. I will say that "Brave" looks really good when played on my computer. The only bad part is that I don't have space in my lap for Pilchard when I watch a movie on the computer. (Oh yeah. My TV is dying, too.)