We'd just shoveled another 8 inches out of the driveway back in January but the office chat turned to vacations. Being a small office, we try not to have two of us out at one time. If  you're flying somewhere, you might have to leave or return on a day when someone else is coming or going, but having two people out for more than one day is just inviting the phone to ring with "I need this now" requests.

I get 3 weeks because of my 14 years here so I started thinking about where to spend the time. Because Carole has settled in Virginia, traveling there once a year until I can't travel anymore, is what I will do. I want to see where she lives in all kinds of seasons. I'd been there in mid-May and August. After talking to her, I decided to travel around Memorial Day. I have members of my World of Warcraft guild in Virginia, too, so getting together with them for a party would be easier when there is an extra day to travel.

Now, I love my Jeep. It fits me, fits my lifestyle and what I do. But, with RA, the age of my Jeep and the fact that it's a stick shift make the prospect of a long drive less appealing. In March, I made the decision that, if possible, I was going to rent a car to drive out there. It would be more comfortable than the Jeep. I'd have air conditioning which the Jeep doesn't have. I wouldn't have to shift. I wouldn't have wear and tear on the Jeep and there would be cruise control, allowing me to stretch out my legs in between those times when I stop to actually get out and walk around. Then I fell on May 1st.

My right foot still swells at night, although not like it used to. There is no pain in the knee and the bruises are all gone. But that trauma made the desire to rent very strong and when the cost of renting dropped $100 between the time I checked in April and when I went to reserve a car in May, the deal was sealed. This is what I got. 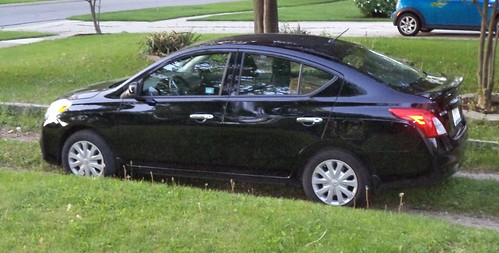 This is a Nissan Versa. With a large back seat AND a large trunk, I was able to take boxes and bins of Carole's stuff from the basement to her house. I never would have fit 2 boxes and a bin in the Jeep, along with the 2 boxes and 2 suitcases I had with me.

This was the 2nd best idea I had on vacation. (The best idea was going to visit Carole over Memorial Day.) The car drove like a dream. It was nimble, maneuvering easily through traffic leaving Chicago. It was stingy on gas. 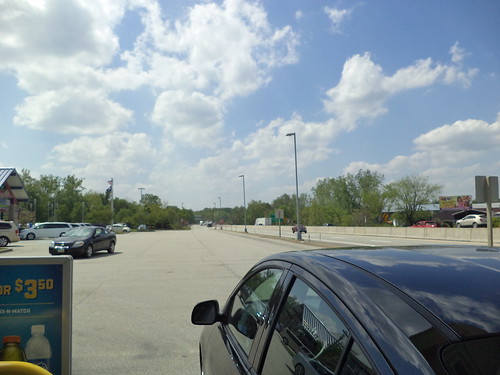 My first fill-up, after picking it up with half a tank, was just inside the Ohio border. This is half-way through Pennsylvania. On this tank of gas, I made it to Warrenton. Two fill-ups is all. Had I taken the Jeep, last year's trip leads me to believe I would have needed 4 fill-ups. A smaller tank and better gas mileage made the cost of gas less than $100 one way.

All the room in the back meant the most important things could be in the passenger seat next to me. 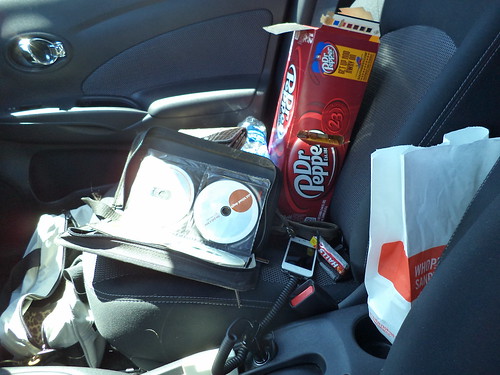 That's lunch, Dr Pepper, my cell phone and my music. I could keep my life right there at easy reach. Last year, my music got sandwiched behind a suitcase I was bringing because there was no other place to put it. Having non-essentials in the back was wonderful.

Traveling with an I-Pass to breeze along tollways is a bit of a problem when you have a rental car.

I know how to add and delete cars from my I-Pass account. I was told NOT to add the rental car because any outstanding tolls attached to that car would automatically be deducted from my account and getting a refund from the Tollway was worse than pulling hen's teeth. "Just go through the manual lanes" I was told. That did result in some slow-down in my travel time, and I forgot on a few occasions because I'm so used to just breezing through the lanes. But this small nuisance is not enough to detract me from renting again the next time I go visit Carole.

One thing came up that I hadn't considered. Mountains. 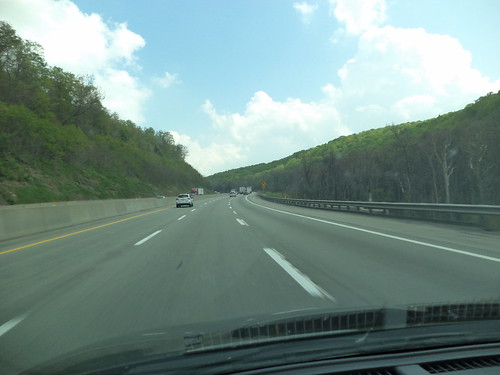 Last year, the drive to and from Carole's involved my spending time in the slow lane to the right. In fact, the Jeep was so slow that not only did I have to put on my flashers, but I got passed by semi trucks hauling thousands of pounds of stuff. This slow travel contributed to the 16 hour drive on the way home.

But I set the cruise control and, as the mountains and their slow lanes arrived, felt the car compensate for this. A steady speed was maintained up and down. I didn't have to move over unless I got behind someone slower than me. This contributed to my trip out taking 11 hours and 40 minutes. I came back in rush hour on a Friday night so my trip back was an hour longer due to stop and go traffic. I'll need to remember that next time.

All-in-all, this was a fantastic way to enjoy my vacation. We used the rental car to go everywhere. It made me realize that, as much as I love my Jeep, as much as it fits with my personality, I need to get a newer car. I'd love something like this Versa, although not in black. The only problem with it would be getting it out of the drive in the winter. What the Jeep plows through with ease would cause the Versa to become stuck. But that would be a small price to pay for the lack of car repairs, the ease of getting around and the savings on gas. I cannot afford a car this year, even used. I try not to think about the Jeep dying and being forced into needing a car. 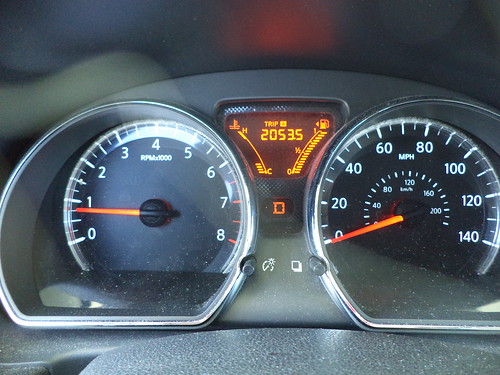 That was two thousand of the most comfortable miles I think I have driven in a long time. Renting a car. Brilliant idea. I'm glad I thought of it.