My vacation coincided with the time I usually go to a local nursery and buy plants for the deck. After the huge number of flowers I had last year, I was going to cut back this year anyway. I had given some thought to swinging by a nursery in Virginia and seeing what they had to offer, but there wasn't time for that. I also didn't have time to go to a nursery in my neck of the woods. Enter the need to be somewhere else for work.

Last week, I had to go to Wisconsin on Tuesday and Wednesday for work. I had a hefty break around the lunch hour so after lunch, I went to a local garden shop. 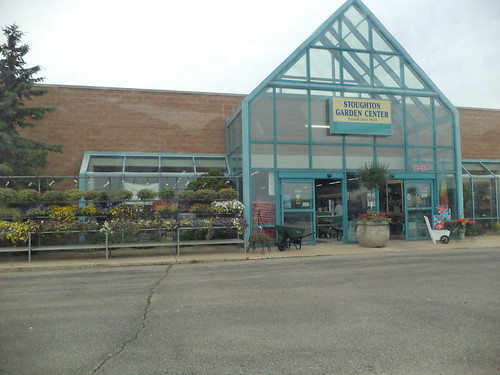 It was kind of hard to get into the mood for planing flowers when it was rainy and the air temperature hovered around 65. But I had time to kill so I wandered about the aisles looking at the flowers and thinking, "I have three pots on the front steps, one by the end of the deck and that one that sat out all winter." I couldn't find vegetables so I stuck with flowers this year. I stuck them in the back seat of the Jeep, finished my work for the day and drove home. 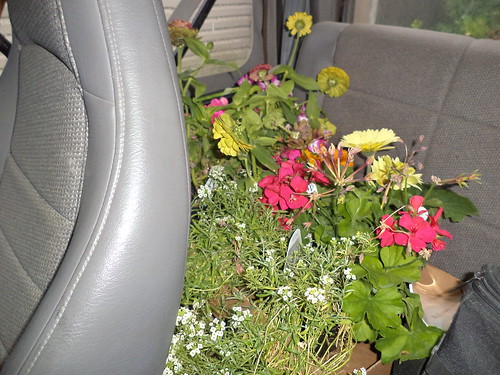 It's just a couple boxes of flowers. This garden center was nice, but they didn't have the huge assortment I'm used to. It's good to go somewhere else because it makes you appreciate what you have near you.

I left the flowers in the boxes on the deck and yesterday, planted. 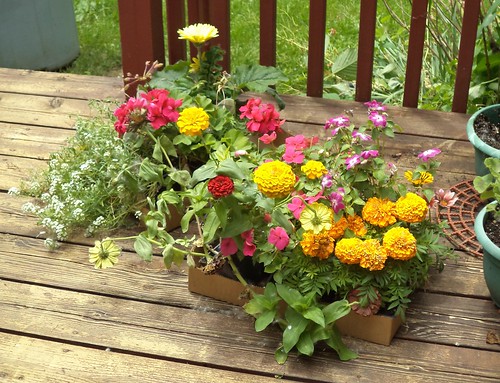 It's a pink and orange year this year, I think. I was drawn to those colors with some white for accent. And, as in year's past, even with the knowledge that I need not buy as many flowers as I had in years previous, I have more flowers than pots. I went with impatiens for the front steps this year. Last year's begonias were wonderful, but I like variety. 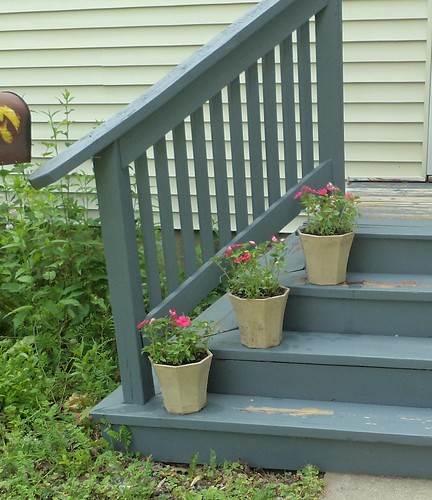 I will have to watch that they don't get too leggy and cut them back in late July. I like the blue of the steps with the pink of the impatiens.

This is the pot at the foot of the deck steps. 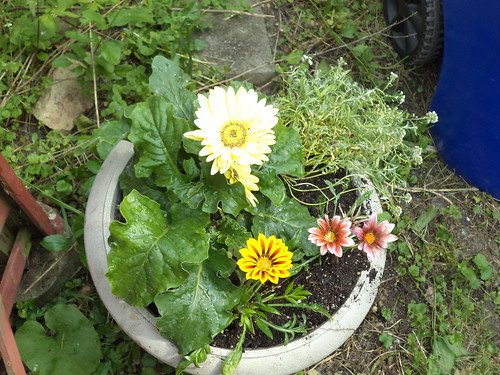 That's a Gerbera Daisy with Gazania accents. I forget what the trailing white flowers are. I couldn't find alyssum, my usual go-to for light low-growing accent flowers. I like Gerbera's for their hardiness, height and color. This is cream and works well with the red of the deck.

After filling these and the one ceramic pot that was outside all winter, I still had flowers left over. So, I went to the shed and pulled out a couple more. What's that smell? Maybe it's the compost pile. I started pulling out my accent pieces too; the Easter Island head, the directional stone which is over by the birdbath and the ceramic cat and pumpkin piece. When I picked that up, there was a rather fat field mouse under it. That smell was mouse urine. Oh...joy. I've had this garden shed in my backyard going on 15 years, possibly longer. I have never had mice in it, never. There's no food in it. The front left door, however, was open about an inch over the winter. Given the 88 inches of snow we got, I perhaps shouldn't be surprised that mice took up residence in the shed. I also should probably be glad they are in the shed and not in the house. But, I will have to open the doors of the shed and let it air out.

I ran out of potting soil before I could get everything planted. 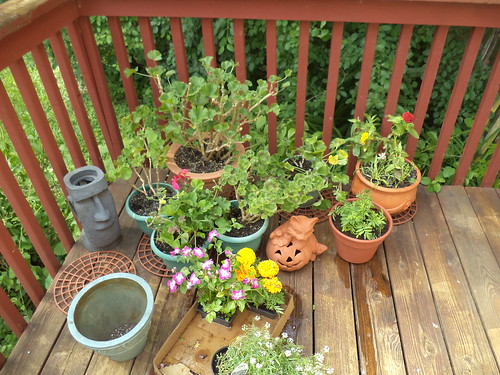 The soil in the blue pot at the lower left was just not suitable, after years of use, for new plants, so I chucked it. It came out in one clump which is not a good sign. I have one pack of impatiens and one pack of marigolds to plant as well as the white plant which will drape over the side. I might go with a larger pot, but I still need soil. It's a nice cluster this year and will be much easier to care for. I only have one chair and the table on the deck at the moment. The girls have not been interested in coming outside. I found a large piece of scat in the back when I was pruning back some buckthorn. That could be why they don't wish to be out on the deck with me. If they aren't coming outside, then I don't need to drag the other chairs up.

The deck and the front steps were power washed 10 days ago. I think my next project will be to paint them. Perhaps that's the July 4th project.