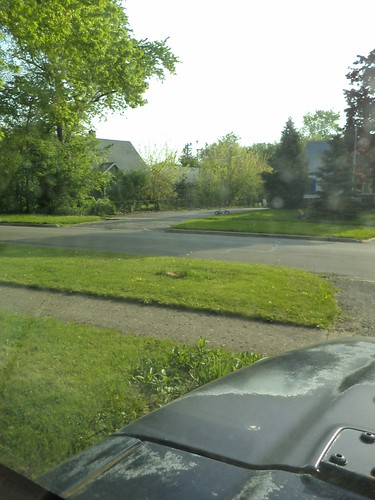 This is a nice shot of a mid-May morning, don't you think? It's actually a shot of the front yard minus the dead birch tree that had been in this spot for a long time.

We planted the birch when Carole was 8. It replaced a maple that a former garbage company destroyed when one of their trucks decided to use his lift basket right by the tree and caught three branches in it. Ripped them right off the tree and cracked the trunk. The maple was dead by fall. The garbage company removed the tree and gave us a credit to replace it and we opted for a birch. It lasted about 12 years before dying. It was topped by a summer storm, meaning the top 3 feet was snapped off, and I don't know if that's what ultimately killed it or if it was something else. It was across the driveway from the ash the city took down in January. They were in the neighborhood around Mother's Day and left me a note saying they'd be taking the birch down. I was happy about that because it meant I didn't have to pay someone to do it. Unlike the ash removal, the area is completely clear of debris.

I'm not going to replace this. There is another maple to the left of this spot. In the 30 years I have lived here, it's grown big and large and the drip line for it extends out to the birch's location. Anything I plant there is going to compete for water. I didn't even notice both trees being gone when I came home from vacation last weekend. It was almost like they hadn't existed although there are stumps to remind me otherwise.

The area doesn't lack for shade but I prefer it to be somewhat sunny. With the east exposure, I like the front of the house bathed in sunlight in the morning. The afternoon has just enough sun for flowers on the deck and then the shade comes from the trees in the back yard. So although two trees have died, I'm okay with the amount of trees I have around.