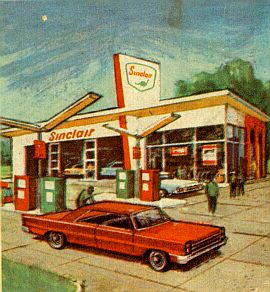 I honestly don't know as I'm not savvy on such things. It seems far more than simple supply and demand. The 10 cent per gallon differential in price between regular and mid-grade in Iowa reflects the state's push of ethanol. Mid-grade contains more ethanol, which helps the Iowa corn farmer. This is also subsidized by the state, hence a lower price. The Jeep runs very well on mid-grade and I don't mind helping the farmer.

Gas has always been cheaper in Iowa than in Illinois. Probably reflects the levy of taxes and delivery fees and whatever else gets tacked onto the wholesale price.

When Carole moved to Reno for grad school, we took photos of every station where we stopped for gas, just to keep a record of what prices were as we worked from Wheaton to Reno. The lowest prices were in Iowa, $1.99 gallon, if I remember correctly, back in August of 2005.

Seattle, where Carole now lives, has higher prices than Chicagoland which reflects the lack of refining in that area and how gas has to be shipped into Seattle. This past Christmas, when Seattle received a foot of snow that, essentially, shut the metropolitan area down, gas was hard to find. The Port of Tacoma froze so gas laden ships couldn't off-load and the mountain passes were blocked with snow so the tankers couldn't make it over the mountains. Many stations just closed for Christmas since they had nothing to sell. But since people couldn't go anywhere because of the streets, it was kind of a moot point. No gas, but no customers either.

As I drove through rural America, the America I remember from my youth, I saw a Sinclair station. That takes me back. I remember when they gave away these green plastic dinosaurs at Christmas. My dad didn't like the guy who ran the closest Sinclair station so we didn't buy our gas there. But I think my grandmother had a good relationship with a Sinclair station. She refused, up to her quitting driving, to put gas in her car herself. I think she got two of those dinos and my brothers got them.

I remember Kurt Russell doing commericals for Sinclair gas. It was during his Disney phase. He pulled into the gas station in one spot and had to scrounge for gas money. He handed the guy a dollar, I think, and his girlfriend said that wouldn't put much gas in his car. He said he didn't have much because he'd spent $5 for a nifty new gas pedal shaped like a bare foot. The station attendant checked the oil and washed all the windows and the front headlights. So Kurt scrounges around and comes up with 50 more cents. His girlfriend purrs, "Ooooh big spender." I think the tag line was something like "Extra service is something you expect at Sinclair".

Heh...interesting. Nowdays, I expect they should have ice cold Dr. Pepper and the ability to pay at the pump.