I needed to move the plants on the deck out of the way in order to get the washer in the back door and down the basement stairs. It was also time to deadhead and then cut flowers back. I admit to benign neglect this June simply because I didn't have to water. Had we not had a record rainfall, I would have spent more time moving things around and pruning.

I started in and noticed there was a guest in the corner around the nicotania. 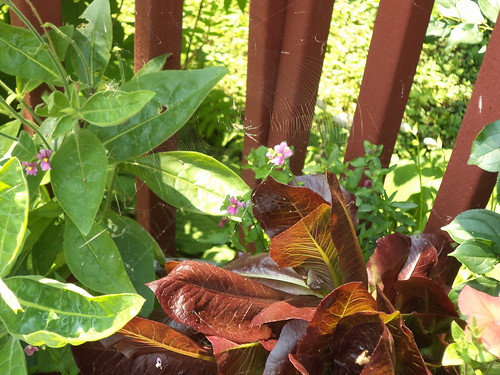 Just above left center is a spider. She had made a lovely circular web in the northwest corner of the deck. As of July 4th weekend, there was only one bundle in that web so I'm not sure if she was having much success with her hunting strategy.

I don't know how long she'd been there. Again, I really hadn't paid that much attention to my deck flowers. 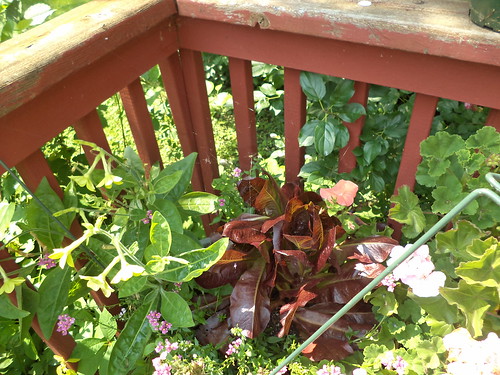 I also felt a bit bad for her because her web wasn't in the best of places. So, I gently removed the part attached to the right and she scuttled off the other side to the deck. I finished pruning and spreading out the flower pots.

There are friends who have an extreme fear of spiders. A couple weeks ago, one of my friends had to stop in the middle of the street to her house and get out of her car because she saw a spider walking across the dashboard. She said she jumped out screaming. I admit to being startled when one has shown up on the steering wheel, having descended from the roof of the Jeep. I don't scream. It's more a gasp because the spider is some place I'm not expecting it to be.

They are so beneficial to life and our environment. I usually, if I can, scoop them up onto paper and toss them outside. In spite of getting some flies and moths in the house, my interior environment is not the best place to catch a meal. They will have better luck stretching a web across the myriad of plants in the yard.

Back in June, I was going to close the window in the office because rain was predicted and found this. 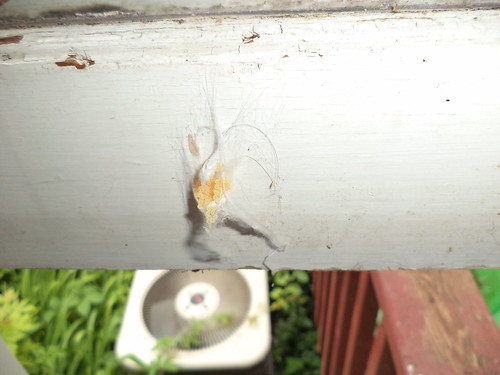 It was this blob of yellow, wrapped in webbing. I poked at it and, when ruptured, all these spheres spilled out. Not real sure, at the time, what they were, I collected them on a piece of paper and tossed them outside before closing the window.

The more I thought about it, the more I wonder if this was a spider nest. I don't know for sure, but the webbing seems to tend toward that notion. It seems weird that it was in the middle of the bottom of the window frame, just stuck there, and not in a corner where it wouldn't get disturbed. For a few seconds, as I looked at it and took photos, I considered leaving it alone just to see whether anything would hatch, but given its location, I would have bumped it eventually. The spheres were rather hard and made a sound like dumping out a bag of marbles when I knocked them off the frame. I've never seen this before so it was fascinating.

My deck spider hasn't been back. I would ignore her for a time if she did come back. She's not really in my way and I'm not in hers. Yes, remove those bottle flies, mosquitos and June bugs from the environment. I applaud you for that. Just don't bring the web inside where it's in my way and don't drop off the ceiling into my vision when I least expect it.