I found this very funny. One of my Facebook friends posted it. 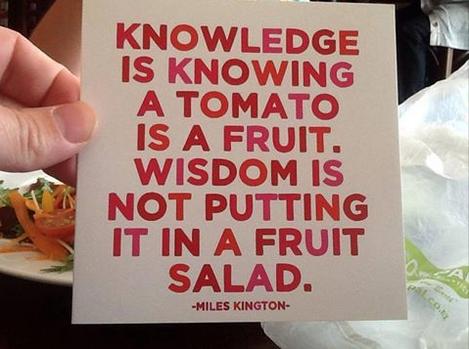 But it got me thinking. How many people know this?

The botanical definition of a "fruit" is a structure which grows from a flowering plant. The flower needs to be pollinated in order to produce the item. Therefore, in a strict botanical definition, a tomato is a fruit, along with eggplants and peppers.

But, when you get to the culinary definition, a tomato is a vegetable. It's because we have grouped the sweet products of flowering as fruits and the savory tasting products, which include roots and stems and leaves, as vegetables. Because tomatoes, eggplants and peppers are savory, they were lumped into the vegetable category, never mind their botanical origins.

It's an American food, eaten by the Aztecs and imported to Europe. We all know that tomatoes used to be considered poisonous. Aristocrats who ate tomatoes in the 16th century would die mysteriously. They didn't know the high acidity of a tomato reacted with their pewter plates to produce lead poisoning. They didn't know that's what was causing the sickness and death. It HAD to be this tomato thing. Because of this, it was mainly grown as an ornamental plants until some enterprising chef in late 18th century Italy decided to try cooking with it. From there, knowledge of it spread across Europe and new varieties of the plant were brought to the US.

What I find really funny is this little nugget about the history of tomatoes in America. (The rest of the article can be found here.)

The fruit vs. vegetable debate

can sometimes reach such a fever pitch that the law must step in.  In the 1893 United States Supreme Court case Nix. v. Hedden, the court ruled unanimously that an imported tomato should be taxed as a vegetable, rather than as a (less taxed) fruit. The court acknowledged that a tomato is a botanical fruit, but went with what they called the "ordinary" definitions of fruit and vegetable — the ones used in the kitchen.


This case was not about someone trying to decide if the tomato was a fruit or a vegetable in the botanic sense. It was a tariff case that happened to involve tomatoes. Taxing them as fruit meant less money for the coffers.

I wonder what would happen if some chef decided to adhere to the botanical definition of fruits and add a tomato or a pepper to a fruit salad. The orange peppers are incredibly sweet and I eat those raw. Other than being non-standard to a fruit salad, I could see adding them for crunch, color and taste. But I think I'd draw the line at a tomato in with my melon and strawberries and blueberries.