This is the time of year when, in spite of window screens, bugs come into the house. I'll be minding my own business in my home office and hear a "thunk", indicative of a cat going after something. Moths need to not figure out how not to come in as they encourage the crashing into walls behavior.

At the end of last month, the girls were chasing something, but I couldn't find it. There was the noise of running around followed by the sound a cat makes when it has prey. I would go into the living room, only to be met with "innocent" looks. I couldn't find what they had.

Then, as I was preparing for bed, I happened to see Pilchard staring at the ottoman and I saw it. 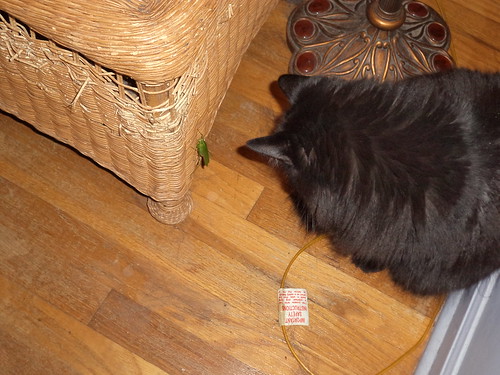 She was just sitting there watching it. I haven't seen a grasshopper that big in a long time. 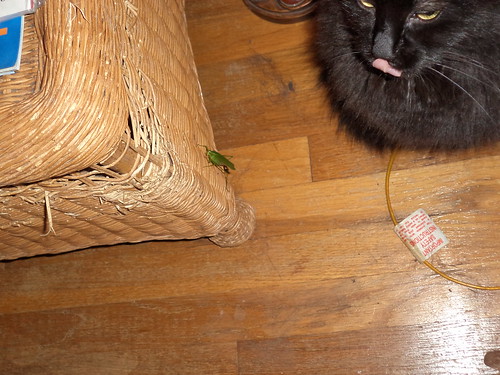 Okay, girls, I need to toss this outside. It was less about saving the bug's life and more about being able to fall asleep without hearing them chasing something in the dark. I worry about them knocking something over and getting hurt in the process. As I reached down to grab it (I'm not afraid to catch bugs.), it bounded away, followed closely by Mija. I have no idea where it went, but I've not seen it since, nor have I seen any remnants, if you get my drift.

Ah the end of summer.