The Overwhelming Feeling of Being Overwhelmed 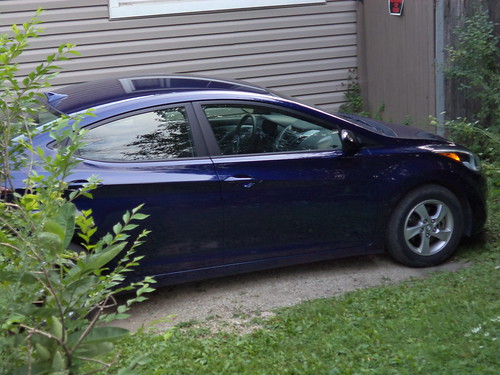 No, that's not the Jeep. That's a rental car, a Hyundai Elantra. I was headed west last week, out to Rock Island to finish up this inspection project. I got just past Dekalb on Interstate 88 and the Jeep shuddered. The motor sounded like it skipped and there was a palpable shudder as I was driving down the road. I thought it was perhaps a wind buffet as I was being passed by semis going 75, but it happened a few miles later when it was just me. It scared me so I pulled off at a truck stop in Rochelle and made the decision that not breaking down was in my best interests. That was Thursday.

It's now Tuesday afternoon and I have no idea what's up with the Jeep. I have the rental car for one more day. I'm trying to keep my spirits up, but I have to say it's been terribly, terribly hard to not burst into tears.

Back in March, I did a budget for the rest of the year. I figured out how to save money to try to go to BlizzCon in November, as well as pad my savings account for unexpected expenses. When the washer died, I was so proud of myself for having saved and to have built in some minor wiggle room to afford a new washer. It wouldn't impact BlizzCon. Getting sick last month did, but not too terribly much. I just didn't cook so I ate a lot of prepared foods. An unexpected bonus funded the Target run that got me foods I could fix with minimal effort since I had next to no energy. I made it through August. I came through with my budget intact and even a bit more to set aside for souvenirs from Disneyland.

I need a hair cut. Nope. I need groceries. Nope. I need to buy air fare to California. I've watched them creep up from $280 to currently $320. I will have to pay quite a bit more when I can afford to buy them. I need to have money for the hotel room. And I so wanted to go to Disneyland while I was out there. That ipad idea. Nope. Disney is not a "must see". I can scrap that to save money. I'll need to eat but I don't need to buy souvenirs.

I tell myself to be grateful that I have the funds to fix the Jeep. I would be well beyond stressed if there wasn't any kind of cushion to fall back on. I'm used to living on scraps and the bare minimum. Still, there is the nagging voice that says, "You didn't NEED to go to BlizzCon, you know." It's too late to change the name on the ticket, though, so I've purchased it even if I wind up not going due to finances.

The Jeep needs to be replaced. Even when it gets up and running again, I need to continue to stick money into my replacement fund. This Elantra is fun and I've very much enjoyed driving it. The "racer" styling to the roof has taken some getting used to. I can't always see out the rear window when backing up or when I look over my right shoulder when changing lanes. It would take getting used to. Plus, I would have to shovel the drive now when snow accumulates more than 3 inches. Now, it takes a 6+ inch snow for me to consider shoveling. 4-wheel drive and I go. Still, that's not an insurmountable problem.

I looked into used Elantras. I can't buy new. The new car smell is toxic to me and it causes my allergies to go into overdrive. I get physically ill. Good used Elantras are selling for $11,000. I can't, right now, afford that. I don't want to jettison the rest of my budget. I'm on track for paying off some debt the first of next year. I want to stay in that track. It's important to stay focused after all I've been through.

Update: I can breathe. My mechanic cleared the codes because they "didn't make sense", changed the oil and the air filter. Then, he drove it around for 20 minutes and could not make it stutter. He said he's flummoxed. "Just doing those things shouldn't make a problem like you were describing go away." They are going to keep it through noon tomorrow and try driving it in the morning since that's when I had the issue. I can't spend any money until after I pick it up and pay for the rental car, but this is much better than my worse case scenario.
Posted by Deb Montague at 3:14:00 PM