I get to go amazing places and non-amazing places with my job. One of today's locations was a repeat of the space from back in March, those balmy days in March when it was in the 70's and we were starting this crazy project. We're back in the same spaces and people seem to be reasonably understanding about it. It's one of those, "When it's done, it will be wonderful. It's just the getting to the done part that's awful."

Anyway, today's trek started at the National Hellenic Museum at the edge of Chicago's Greektown Neighborhood. 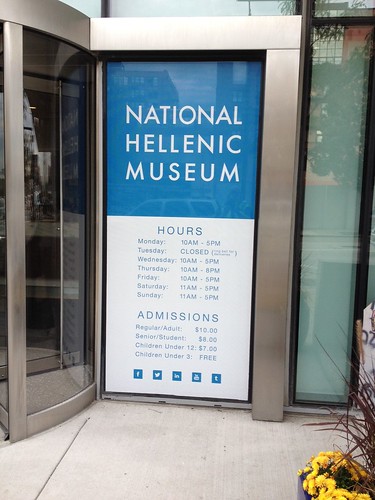 The museum is located at the corner of Halsted and Van Buren, just off Chicago's downtown, just west of the Kennedy Expressway. You can see the Kennedy from the west side of the museum. We had to invade their space and stick 2 more monitors in the building and I had to inspect the south side again. The previous visit was to an empty exhibit space. It's not that way right now. 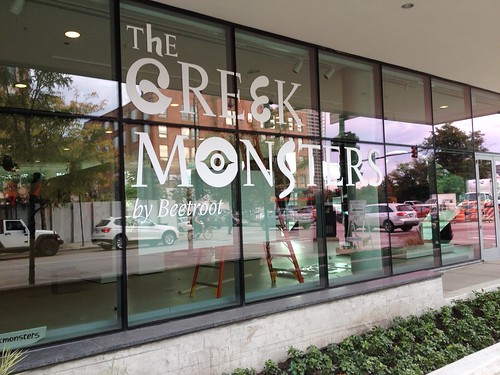 We could see, yesterday, when we walked by the museum on the way to lunch, the staff doing the finishing installation of this exhibit. It opens tomorrow, Friday, so there is much scurrying about to get things ready. 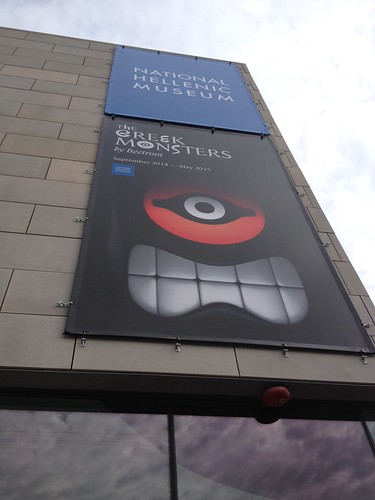 The Beetroot Design Group has imagined monsters from Greek mythology and put them in a black, red and white color scheme. The result is, I think, fantastic, and hugely playful. 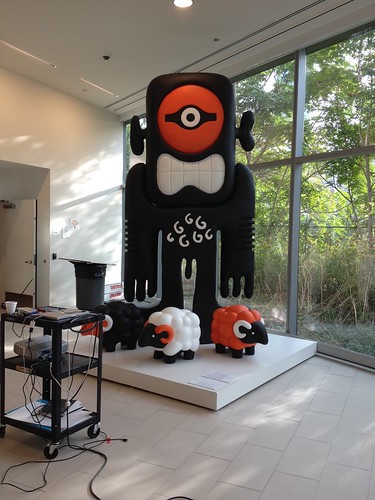 Look. A cyclops, with sheep. 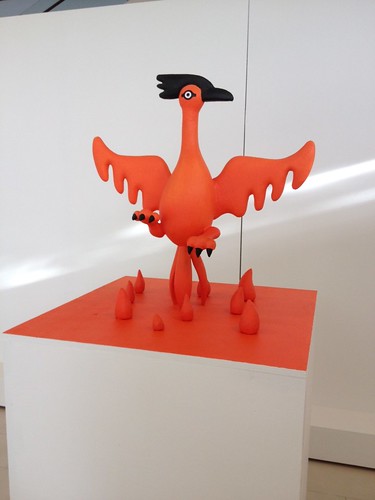 How about a phoenix rising from the flames? 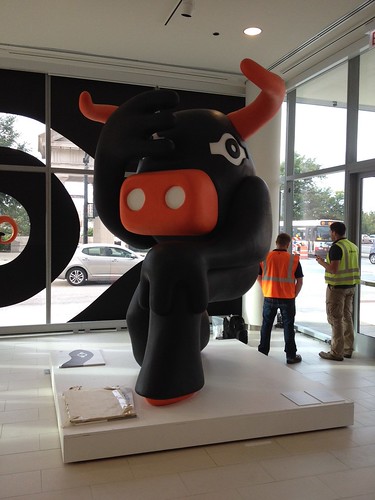 Or maybe you'd like a minotar, kneeling, wondering what you're doing in the middle of his maze. He was just eating his hay and you've walked in and disturbed him. (That's Gene and our client in the background waiting for the machine to call in.) 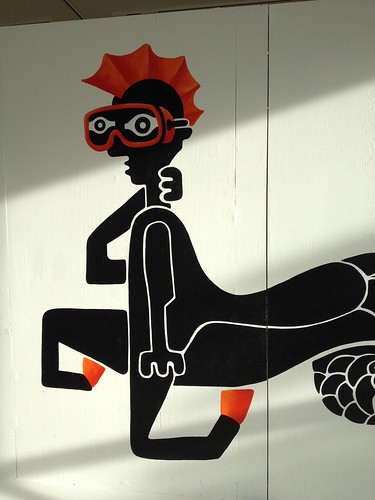 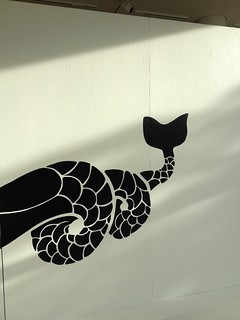 There are giant panels of painted artwork, too big for me to get into one frame of the camera. 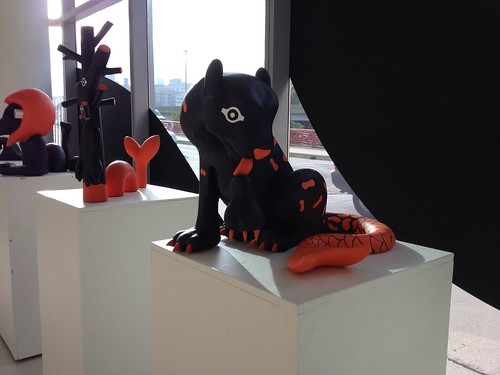 I would buy a miniature of this piece. It's a black cat. I really love the bold colors.

Each piece will be accompanied by the name of the monster represented, a poem and a brief few paragraphs about the monster. My Greek and Roman Mythology class, so very long ago, failed me, for I couldn't remember the monster in the painting nor the cat. The minotar and the cyclops are very familiar by virtue of their use in other art and stories.

As much as I love the cat, these are, hands down, the stars of the exhibit, for me. 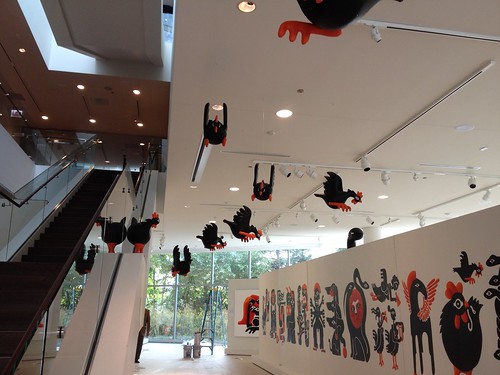 Look at these. If this doesn't bring a smile to your face, you're too far gone. Chickens, flying chickens. You can see a graphic representation panel of all the monsters they have designed at the lower right. It's 35 feet long and 7 feet high. It was fun to just stand there and admire the images. These are representations of the Stymphalian Birds. Dealing with them was Hercules' sixth labor. According to the myth their feathers are bronze and they can shoot them like arrows. Their beaks are like swords and they fly at anyone who comes to kill them. Their poop is highly toxic and will kill people who touch it. They were terrorizing the town of Stymphalia and needed to be eradicated.

Chickens. That's what theses are. I laughed. It was so fun to stand under them and just watch. When you heard the air conditioning come on, which you'd probably not hear at the start of the opening due to people noise, you could watch a very faint sway to the birds as you stood looking. It was not hard to imagine a flight of millions of these. I think I would be laughing too hard to do much about them.

I am sorely tempted to return to the museum to see the final installation. I also have to admit that I'd pay money for a cat and a chicken. I love art that's imaginative and this certainly is. If you're a reader from the Chicagoland, NW Indiana, SW Michigan or SE Wisconsin area, do come and see this. It's delightful.