Next Monday, Autumn begins. There have been changes in the yard to remind me that fall is coming. 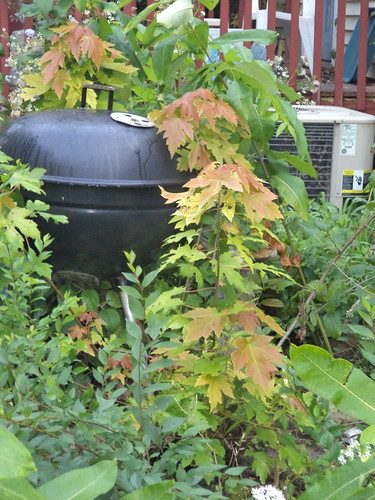 It's too chilly at night now to have the windows open. I have to remember to open them before I leave or the house seems close when I come home. Funny how it doesn't feel that way once November comes and I have all the windows covered in plastic. I know some people love it when the night temperatures dip into the 50's. I think good sleeping weather is mid to upper 60's. So, I go around closing windows at night and opening them during the day. 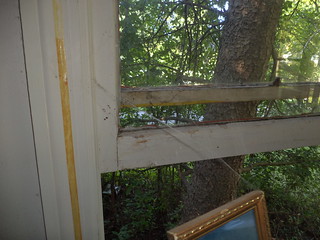 The other thing that's happening is the spiders are coming inside. I came home from work yesterday and decided to open the windows. We've had rain and a threat of it enough that I had been keeping the windows closed. But yesterday, the temperatures were in the 70's and there was not a reason to keep the windows closed, even though I have to shut them at night.

I go to open the living room window and my hand hits a mass of spider webbing. You can see one long strand in the photo but trust me when I say the whole bottom of the window was a mass of thin webbing. I opened the window and then got the broom to remove it. The girls usually sit over by this window because squirrels will go up and down the pine tree just outside it. I wondered why they hadn't been in the window. They didn't want to deal with it either.

And, on Monday, as I was brushing my teeth before bed, I felt something fall into my cleavage. Thinking I had misjudged a glop of toothpaste, I looked down to see a spider crawling across the inside of my pjs.

Now spiders don't necessarily bother me. Their benefit to the outside world in removing harmful insects is well known. If I find one, I usually chase it onto a piece of paper or the fly swatter and drop it outside. The operative word in all of this is "outside". That's where they really need to be and to stay. Crawling across the ceiling of my bathroom and then deciding to drop onto whatever they can find is not my idea of a beneficial insect.

I did not scream but I removed that pair of pajamas in record time. If there ever is a pajama removing contest, sign me up and tell me there is a spider in the top. I saw it later, crawling across the floor. before I could crush it, it darted into the pile of dirty clothes, which included the pajamas. I just scooped the whole pile up and dropped it into the laundry chute. Maybe the weight of clothing, including pairs of jeans, will crush it.

This morning, we had fog, another harbinger, at least in the Midwest, of the arrival of fall. 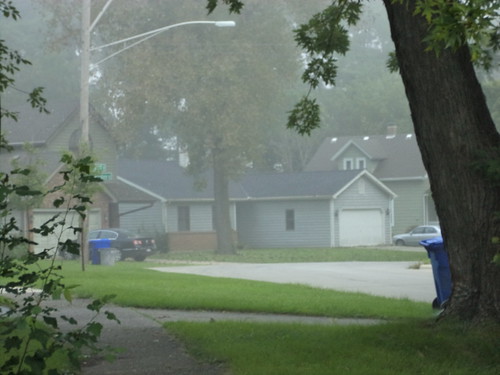 I don't remember when the last time was this year that weather conditions produced morning fog. I love how it makes the world smell. There were minor delays at the airports because it kind of rolled in unexpectedly but it wasn't that heavy. 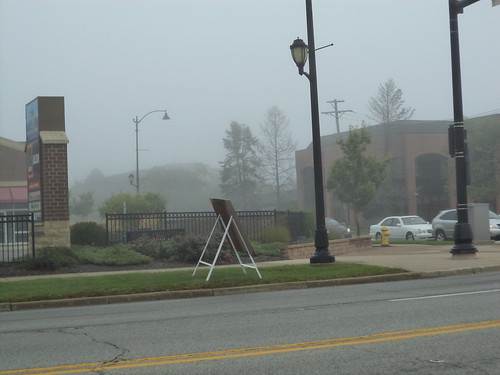 We haven't had a heavy, can't see your hand in front of your face type, fog in years. I'm wondering if that's a product of global warming. Conditions are just not right anymore to develop that kind of "peering through waxed paper" fog. The world looks so different when it's foggy. We see more of this as fall approaches.

I need to buy more hot cocoa and some pumpkins and some apples.