I managed to get 7 books read in 2014. I didn't review the last one. I don't even have a photo of it. It was a cat book with a copyright of 1976. It wasn't very informative or insightful. The study of the cat has come a long way in the almost 50 years since the book was published. Thankfully, I got it used so I don't feel cheated by spending money for a book containing now largely discredited information. I guess it's interesting to see how far science has come to trying to understand the cat.

The book that's been on the ottoman since the cat book has been Mary Wollstonecraft's A Vindication on the Rights of Women. I feel I should read a classic every year, either something I have read before or something I haven't. Wollstonecraft's book will, periodically, be used as a reference to women's rights. She wrote it in the 18th Century and was an uncommon woman. But it's kind of like slogging through a thawing peat bog. I'm half-way through it and I kind of feel like I HAVE to finish it, rather than want to finish it. That's a clear sign that I need to set it aside and pick up something else, something more engaging.

Lately, my eyes and brain have been assaulted by other books. As you know, I honestly don't NEED books. I should take a bag to Half Price Books because they will buy stuff and give you a store credit, which would promote the purchase of more books, but I'm sure I can find things to use up the store credit. At least I'd have the books out of the house. If they gave me $15 for a bag of books, I could, perhaps, find something large which could be a Christmas book for someone.

After much thought and reading, I purchased these from my friendly bookstore, Just the Bookstore, in downtown Glen Ellyn. 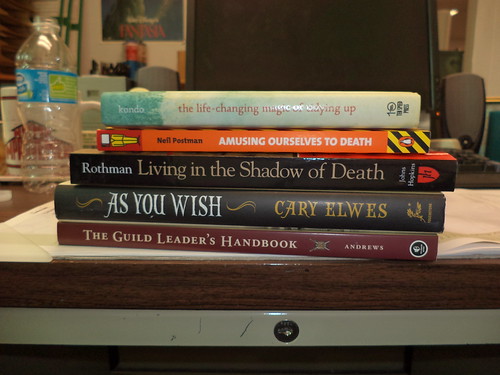 The Guild Leader's Handbook is a reference tome for people who lead guilds in computer games. As you know, I lead a guild in World of Warcraft. Any help I can have to navigate the needs of the guild and the drama of having 85 people in one place is welcome.

Living in the Shadow of Death is the book which sparked the PBS "American Experience" program about tuberculosis.

Amusing Ourselves to Death is a book about how television has eroded the ability to critically think and discuss politics, science, most anything. It was originally published in 1985, but I've seen it referenced in quite a few articles on the news and science sites I frequent. If eight different authors refer to this in eight different articles, I figured I should see what they were talking about.

As You Wish is the memoir of Cary Elwes who played "Wesley" in "The Princess Bride" movie. It's one of my favorite movies and has become a part of our culture. I probably should, at some point, read the original novel, The Princess Bride by William Goldman. While Goldman wrote the script for the movie, he left out a great deal which fleshes out the characters more.

I tend to steer clear of memoirs. A huge number are released every year and it's tough to find one that isn't about a horrible family or event which colors the author's world outlook. I guess if you had a happy childhood, you don't need to write a memoir to exorcise your demons. But the doom and gloom of most memoirs, even with a happy ending, turns me off. This book, however, promised to be very narrow in scope. It only deals with the time Elwes was filming the movie. Since the book's release, I've read probably a quarter of it on a wide variety of web sites. Everything I read was funny and well written. It seems like the perfect late winter book when the storm rages o'er me.

The top book was an impulse purchase. The Life-Changing Magic of Tidying Up crossed my news feed in, of all places, a couple of craft blogs I read, as well as a book review on NPR. The premise of the book is the Japanese method of decluttering your life really will remove the stress we feel when our homes are filled with stuff. I've said, a lot, that I want to declutter, purge, remove. The Aunt Peaches blog to the right had a wonderfully glowing review of this book and that's what made me get it when I asked Renee if they had it in the store. I guess I need to read the whole book before jumping into decluttering. One of the tips is to hold up an item and say, "Does this bring me joy?" If not, it goes. I'm sure there is more to it. You'll be the first to know.

So, Mary Wollstonecraft is going back in the pile. I'm not sure which one of these I will start with. My goal is still to read a book a month, 12 books at least, per year. I think decluttering would go hand in hand with that. Did this book bring me joy? If not, add to the get rid of bag.