A lot of commentary has been made, rightfully so, about the amount of sugar found in instant oatmeal. As a country, we aren't trusted to decide if that pouch contains enough sweet for us so an artificially high level of sugar is added. Quaker Instant Oatmeal is the biggest offender, but other instant oatmeals can be just as bad. I love oatmeal, but I don't like the 30 minute prep and cooking time. Plus, it seems to just take longer to eat the non-instant than the instant. It's probably a mind-set thing. "Instant" equals fast which means I eat it faster than the other stuff.

After reading the labels on instant oatmeal, I swore it off. Quaker Instant didn't have real flavors. It was artificial this and fake that. But during the brutally cold February, I found that a bowl of cereal before work just wasn't cutting it. I needed to find a better instant oatmeal. I think I have. 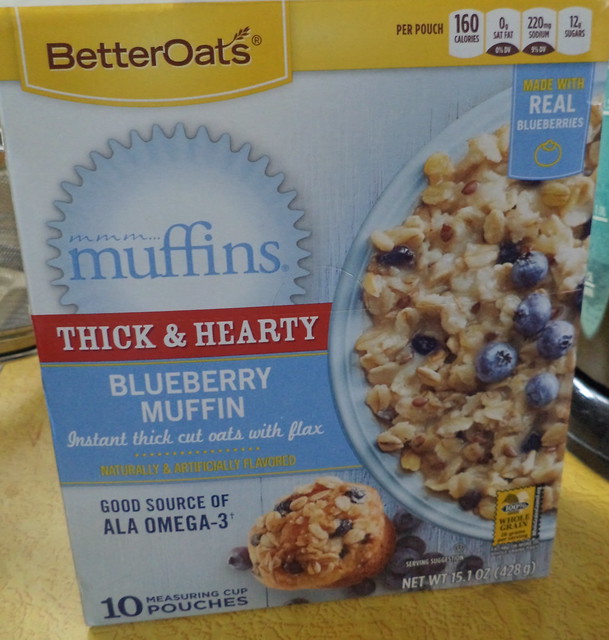 The ingredient list reads like an e e Cummings poem. Oats, sugar, flour, cinnamon, flax seeds and blueberries. Go read a box of Quaker instant. I'll see you tomorrow. By law, if a product is fortified, they have to list all the vitamins and minerals contained therein, but you'll be amazed at the ingredients when compared to other instant oatmeals. I thought I would give this a try.

Dump out a pouch of Quaker oatmeal and what do you generally see? The oatmeal comes out followed by a rain of dry stuff. That's sugar. That can be depressing, to see all of that in the bowl. This is what Better Oats' oatmeal looks like out of the pouch. 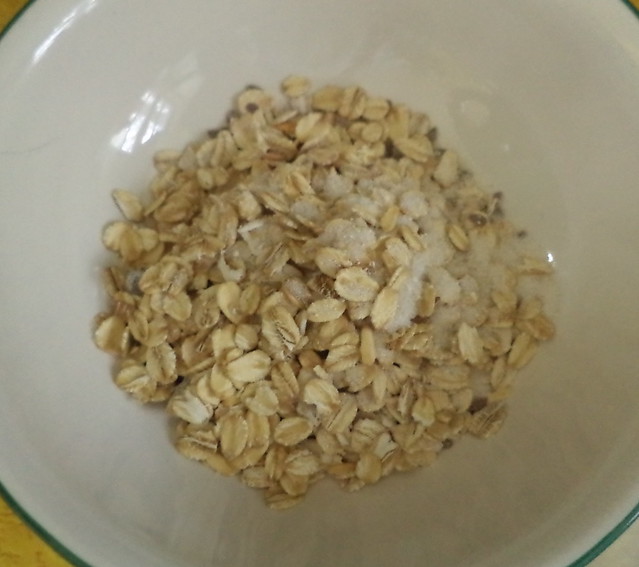 Instant oatmeals get mixed with water. I have heard of people mixing them with milk or juice, but they are designed to be water-based. Add your water. Put in the microwave and nuke or mix with hot, usually boiling, water and you have breakfast in 2-3 minutes. There is a measuring cup required. One of the "hooks", if you will, with Better Oats is that all you need is a bowl and a spoon. The pouch doubles as a measuring cup. Just fill to the line and add to your bowl. 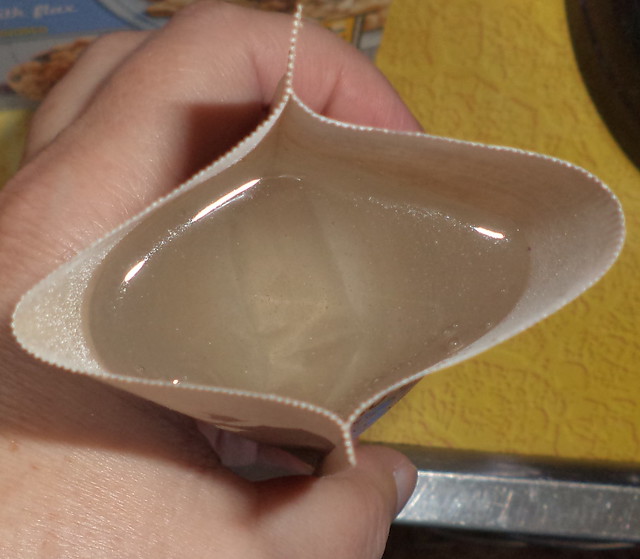 You need to be careful that you don't squeeze. Water goes everywhere. The pouches are lined with a wax which makes them waterproof. One of the advantages of Quaker Instant Oatmeal is that everything is recyclable. Once you dump the contents of the pouch into a bowl, the pouch can be tossed with paper recycling. I can't recycle this pouch, at least, not yet. I don't know technology much to know if there is something that can be done to make the pouches recyclable but it was sad tossing this in the garbage. 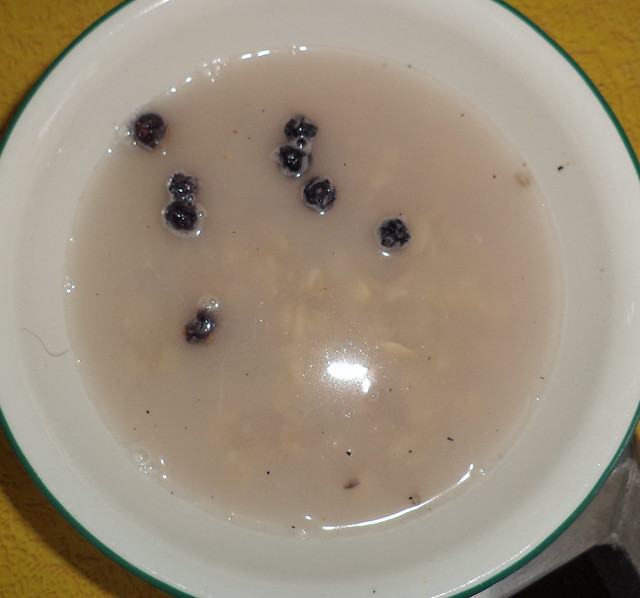 It's a half cup of water which is added to the bowl. In case you put the box away after getting a pouch, the directions are printed on the side of the pouch in big letters so your bleary morning eyes can read them. 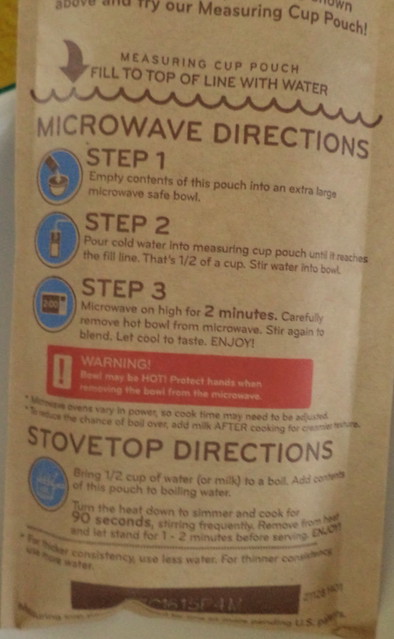 What is nice is the option to cook this on the stove, if you don't have a microwave. There is one final irritation but I've had this with regular oatmeal. The product expands as it cooks and contracts as it cools. The first time I made this in the microwave, it boiled over my soup bowl. I have to make it in a mixing bowl so there is room for the water to boil, the oats to expand and the product to rise and not prompt a clean up of the microwave. Technically, I needed to do that, but it wasn't something I wanted to do right then. If you've never had to clean up spilled oatmeal, do not let it harden. Trust me on this. You could pave roads with hardened cooked oatmeal. With the stovetop method, you would pour the resulting oatmeal into a soup bowl. I just eat it out of the bigger bowl. 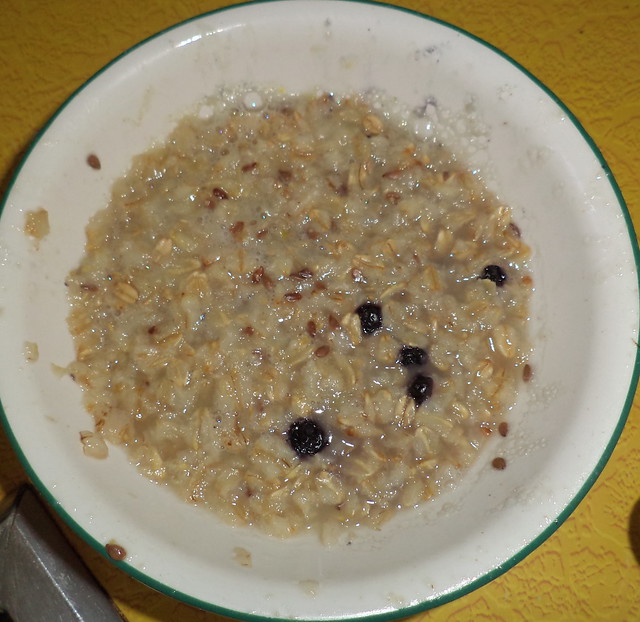 You can see how it boiled over the bowl. There is flaxseed for the Omega-3 vitamin they provide. It seemed a bit soupy for my taste so subsequent bowls have been with less than a half cup of water. That hasn't affected the taste.

And what about that taste? It's good. It's not nearly as sweet, even accounting for the blueberries, as Quaker. It's a more oatmeal taste. The dried blueberries reconstituted nicely. It's advertised as "blueberry muffin" flavor. To me, it tasted like blueberry oatmeal. I generally find blueberry muffins to be sweeter. I didn't add anything to this bowl and have not added anything, like honey, to additional bowls I've had. There's a good mouth feel and it looks like oatmeal. Sometimes, instant oatmeal can look like mush because the oats get overcooked.

The bottom line is this is, I think, better than Quaker brand. It's competitively priced. I think it was 30 cents more a box. I have seen it on sale for less than Quaker brand, however. There are a couple other flavors I have to try. When I want fast oatmeal, this is what I'll be eating.