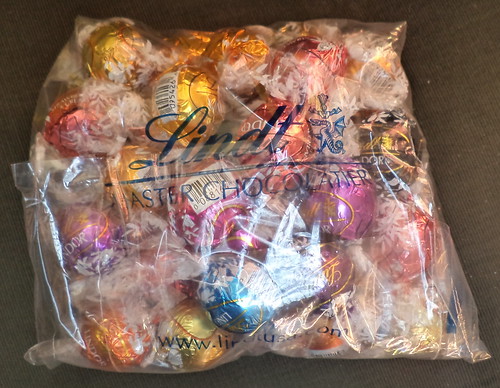 At the outlet mall, there is a Rocky Mountain Chocolatier and  Lindt Chocolate Shop. We passed by Rocky Mountain and stopped at Lindt. Lindt had a sale where we were able to split a set amount of chocolate and sign up for a frequent buyer card.

Technically, I needed a bag of Lindt chocolate like I need a rash. There are a lot of bags of M&Ms on top of the fridge. But there is something immensely satisfying about popping a Lindt chocolate into your mouth. Unlike M&Ms, I don't have to suck on the shell before it splits, to get at the whipped chocolate center. I think I have a half dozen different flavors in this bag. I don't have a favorite. They are all good, but I avoided the coconut and mint offerings.

I listened to the manager talk about how he never eats Hershey anymore. I thought, "What a shame." As I have grown older, I see the value in consuming a wide variety of chocolate. American chocolate is sweeter than European chocolate. Even when you're eating a 70% dark chocolate bar, the taste is sweeter if the confectionaire is based in the US. Europeans have, up until the last 10 years or so, had a wider variety of flavors from which to choose. We're better but still, M&M/Mars is the #1 chocolate manufacturer in the US. In spite of dark, white or candycane M&Ms, the essential offering is Americanized chocolate.

But while I feel a bit of sadness for this gentleman deciding that he will only eat one kind of chocolate. I have ruled out one kind for a very different reason. Last month, the Hershey company won a lawsuit against an importer of British chocolate. In case you don't know about this, Hershey bought the rights to the US production of Cadbury's chocolates. Very gradually, as global trade has exposed people to more items, importers began to bring in Cadbury chocolates from England. English ex-patriots say the US chocolate is of an inferior mix. Having experienced both European and US chocolate, I wouldn't say "inferior". It's different owing to what the US deems should be the composition of chocolate manufactured here. Plus, it's very much a decision based upon what you've grown up with.

Anyway, Hershey's filed a lawsuit against some importers of British candies claiming their trademarks were being infringed upon by these bits of British chocolate. They claim there is "confusion" between these sweets and their US made counterparts. The net result of this is the loss in heavily British/Irish communities, particularly on the east coast, of the chocolates and other treats which were imported for the few shops which do that kind of business.

I understand the need to protect one's creations from trademark infringement. When the case was settled, we had a discussion in my World of Warcraft guild about how important it is to protect what you've worked hard to create. Knock-offs are a huge business. But here's the rub. Unless you know exactly where to go, finding British chocolate is not as simple as picking up a candy bar at the Casey's when you fill up your gas tank. I'm told Cost Plus World Market has some things, but British chocolate seems to be a niche market. It would never make a dent in the grand trade that is Hershey's. I fail to see that if a wrapper is orange, it's going to confuse a shopper looking for Reese's Pieces. It seems to me, there is plenty of room in this vast world for Flakes and Crunchies and Reese's and York Peppermint Patties.

The bottom line, for me, is that I have decided not to buy Hershey products. I really didn't need to eat Twizzlers, but this will put a dent in my s'mores consumption. How can you make s'mores without that flat Hershey's bar? I guess, if I want this treat, I'm going to have to find out. Maybe I can take some Lindt chocolates and stack on them a hot marshmallow.