A Little Bit I Can Do

In the wake of the disastrous news of the government rejecting the Paris Climate Accords, I backed out of the driveway this morning and scanned my front yard. 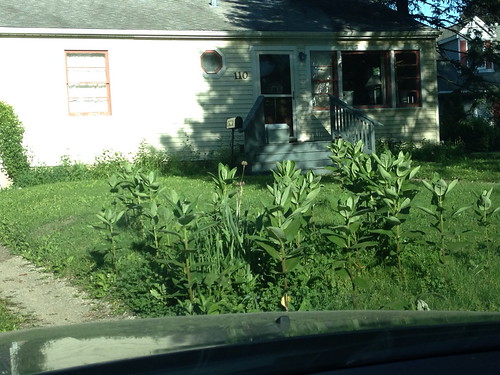 Usually, I back in so I can drive out, but there had been a car behind me, so I had to pull in front first yesterday. This overgrown and apparently weedy patch is full of milkweed and a very small bit of rattlesnake master. There used to be more prairie plants here, but they haven't survived and the corner needs to be redone.

The great weather of this week has allowed the milkweed to flourish. Just two weeks ago, after I mowed the lawn, they weren't quite so high. 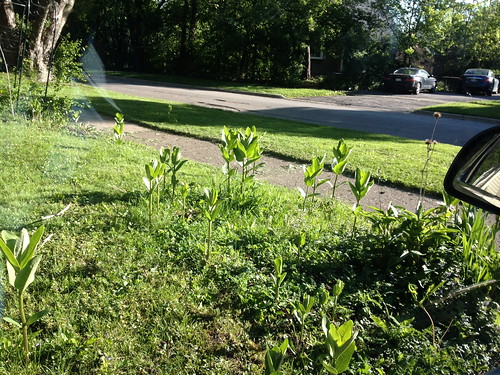 Mowing is a bit of an issue as I don't want to mow off more than necessary, but I had to sacrifice a few to get the mower around the area.

I don't get how a group of people can be so tone-deaf; two words woefully overused, but which are true; to science and to the wishes of corporations, cities and people. I don't even have to read the underlying science to see the changes in my life in the past 30+ years I've lived in Wheaton.

When I first moved here, lilacs bloomed right around Mother's Day. While a white Christmas wasn't always guaranteed, you could count on a snowpack of at least 2 feet from maybe mid-December through the first week of March. The last frost free date was May 25th and that could be pushing it. When my sister moved to northern Michigan, she told of lakes where the secluded shady areas often still had ice along the shore through mid-June.

It's been gradual change, but it has happened. The frost free date has moved to May 22nd. We rarely have a lingering snowpack. We gardeners now worry about the lack of moisture in the winter because that moisture, which should melt slowly in the spring, seeps into the ground, helps germinate our seeds and establishes our plants for the growing season ahead.

I saw a robin at the end of February. I worried, but I needn't have. We didn't get snow. Indeed, Chicagoland set an ominous record this past winter for most snow-free days. The growing season has been pushed back to the end of October and, even then, we often don't get the killing cold until mid-to-late November. As my fall allergies tend to be the worst, I always counted on that mid-October cold to kill the plants and their fall pollen. Not anymore.

I feel powerless to change minds. I try, very hard, to understand where these people are coming from but I guess my desire to educate myself on what's happening prevents me from seeing their world view. So, as frustrated as I was yesterday with the myopic world vision, backing out of my drive this morning, I saw a way forward for me.

In the creation of a landscape intended to help a threatened butterfly, I am preserving habitat for more than it. In taking the yard waste to the curb, I noticed divots in the lawn. Ah yes. Skunks and raccoons are digging for grubs. I can expect now, to have the aroma of skunk waft through the windows some night. I know people can't stand grubs in their lawn, but I've come to see them as part of my ecosystem; skunks, too. If I can make my little rectangle of this earth insect and animal friendly, I'm making it friendly for me. It's not simply about tossing some petunias into a pot. It's about a pesticide-free lawn and the reliance on elbow-grease to maintain that. I ordered bird and critter food today. They probably can do very well without my assistance, but the return of the hummingbird reminds me they can also use help.

If I could afford to redo my heating and cooling to go solar, I would; in a heartbeat. I have cut my waste stream to one bag of garbage a month, if that; although cleaning litter boxes generates far more waste than I do. My recycling can is put out three times more than my garbage can. When purchasing things, what's the cost in packaging? Can I recycle it? I have shifted my purchasing to online more than brick and mortar stores, which I know has contributed to their decline. But, I bring a reusable bag to shop at Penneys and am told I cannot use it for my purchases, "Because it looks like you've stole your merchandise." And I can't, if it's one item, just carry it out of the store. Again it's because it appears I've stolen the item. I get that. Theft is a huge problem, but I have much difficulty recycling plastic bags and would rather not use them. Finally got that through the head of the store manager at Mariano's. If I say, "No plastic bags, please", I mean, no plastic bags. Don't put the shampoo or meat in a plastic bag. You're not being nice when I can't easily recycle them. There is no logical reason you can't pack my groceries to keep dish detergent away from ice cream.

It is encouraging that cities and corporations feel strongly enough to "go it alone" on the Paris Climate Accord, without the federal government. In a way, it's like this is what democracy really feels like. I have long felt Lincoln was wrong; that there hasn't been government "of the people, by the people and for the people". I feel my minute attempt at providing monarchs a place to live is, in some fashion, slightly subversive, and that's something I can embrace.

In 1993, I went to New Orleans. While there, along the river walk, I watched an ocean-going tanker turn around. The friend with whom I went and I watched, fascinated. The ship was so big, it had to be turned very slowly. In the 20 minutes we watched, it was turned 20 degrees, of the 360 that was needed. Four tug boats, almost akin to gnats in comparison, pushed very slowly to turn. I am proud to be a tugboat, pushing the behemoth that is my government, to turn around. This is not a "done deal". Saving the planet because it's the place where my cats live requires a lot of turning around.

Be a tug. Together, we can grow milkweeds for butterflies and turn around a ship sailing to nowhere.