A Promise of Better Things

I have been noticeably absent this space since early April. It's been a combination of things. I have not felt well. The warm spring days were followed by chilly and damp days. I don't do chilly and damp very well anymore. It settled into my joints and I found myself aching much more than usual. My rheumatologist agreed that this spring has been hard on people with joint problems.

Then, our work load quadrupled, which sounds like an exaggeration, but is not. I found myself doing day trips two, three and four days out of a week. I appreciate that fate or God or karma decided last year I needed a newer car because the drives to all these places was ever so much nicer when it was done in a car with adequate heat and windshield wipers, as well as cruise control and the ability to sip, not guzzle, gas.

This became something of a bad circle. I ached because of the wild swings in weather. I ached because of all the driving and walking. I couldn't get comfortable at night to fall asleep and stay asleep because I ached, which made me tired. Weekends have been something of a fog. I didn't have the stamina to complete a project so my house is littered with unfinished things. This made me sad and, let's face it, depressed, which contributes to the uneven sleeping. Everything accumulated making writing a chore. I just felt overwhelmed and unable to put thoughts to paper.

That being said, I've been working on a short story based on a writing prompt a friend gave me. She "double-dip dared" me to write a story around a silly Internet photo; a photo I had made an off-hand comment about. I know how the story ends. I just have to write the lines to that point. Now that the weather has moderated, it's inspiring to sit outside with my pen and write. I bought a journal to use for book quotes, but picked it up to use to tell this tale. It's probably a pedantic sort of tale, but I haven't done anything like this in years so it feels fresh and exciting.

I probably have 8 more hours of writing left to do. In true "Sagittarius mode", however, there are more shinies calling for my attention. That's what can overwhelm me and leave me feeling depressed. I love having projects to do, but completing them has always been a problem. The simple act of setting up the project is exhilarating to me. What do I want to do and what supplies will I need to accomplish this? But I get into the thing and have to set it aside because something else crops up, like the need to have clean underwear, and then I lose the drive to finish. It was extremely acute during April and, now, May. Then, I feel like I can't do anything and you see where this track goes. I'm ever so good at beating myself up.

The weather seems to have moderated now. I had a doctor visit last week where I poured out my frustrations and my rheumatologist was so understanding. She reminded me that living with RA means doing small tasks. "Just finish one thing and celebrate that; dishes, a load of laundry, pick up the living room so you don't see lots of piles." I got the oil changed and tires rotated. I spent 3 hours writing on the story; advancing the plot by leaps and bounds. I did a load of laundry and swept half of the floors. Just those things made me feel as if I could accomplish more.

Memorial Day weekend was a series of small victories which I'll detail below. Each step leads to another step which leads to a feeling of accomplishment. The business of business is still astonishingly hectic, but it appears, like the Tetris game, things are falling into place so I am not quite so overwhelmed. I still have to travel, but it's not in a rushing sort of way.

And then, as if to rubber stamp my sense of worth, I managed, for the first time in 3 months, to carve out time to go to cross-stitch club at the Wheaton Public Library. I haven't felt any inclination to do any stitching on the project since January because I've been coming back from somewhere on the day of the club. I stepped out of the house and headed to the car. There was a small rain shower going on. It wasn't much; more like the last bit of water was being shaken from the watering can. I got to the car and turned to slide in and saw this. 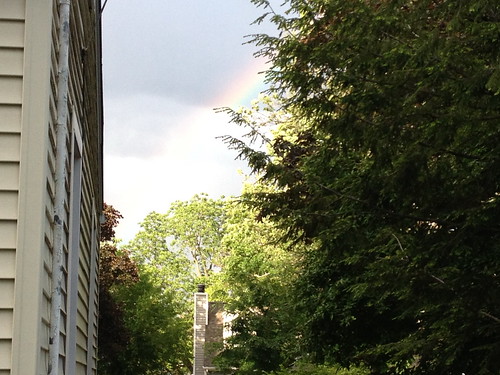 I do not remember when the last time was I saw a rainbow this brilliant. Look at the colors. You can see all of them; red, orange, yellow, green, indigo and violet. Excited, I quickly drove to the end of the drive, got out and aimed my ancient cell phone skyward. 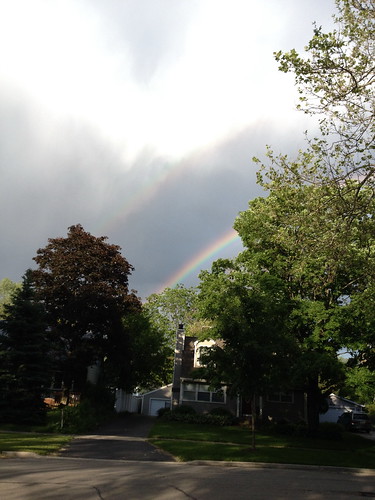 Yes, please. I'll have a double helping of rainbow.

If you've followed me for some time you know I'm not a very God-y person anymore. I believe in an almighty, but I don't feel he pays too much attention to me; checking in on occasion, to see that I'm still hanging in there. Sometimes, he takes pity on me and things align, but most of the time, he smiles and moves on to someone with way more cares than I have. I don't want to make too much of a scientific occurrence, but I think this was nature's, karma's, "God's" way of telling me the storm has passed and, while things won't be smooth sailing, because, after all, it is raining, it won't be quite as bad as it has been these past 2 months. I've come through a choppy time and now there will be quieter seas ahead.

(On a strictly scientific note, I was quite surprised the rainbow was so vivid. We didn't get enough rain to wet the deck all over. It really was simply a sprinkle. Yet look at the colors, how clear and dramatic they are. Everything was at the right juncture to create this scene. Science is fascinating.)

So, dear reader, if you've progressed to the bottom of this post, I can't promise I will be as dedicated to this space as I was at the beginning of the year, but I have hundreds of photos I should blog about. It appears life is on the upswing. Things are, indeed, better. I have a double rainbow to prove it.