The Things I See; A Library's Goodies

Last fall, I had the joy of inspecting a fairly new library in the Albany Park neighborhood of Chicago. What could be more exciting? An English major in a library BEFORE it opens. I had to wander the stacks too because I had to look at the ceiling where the stacks were. I have an observation which was eye-opening to me.

Libraries in multi-cultural neighborhoods need to have books in the languages of their neighbors. 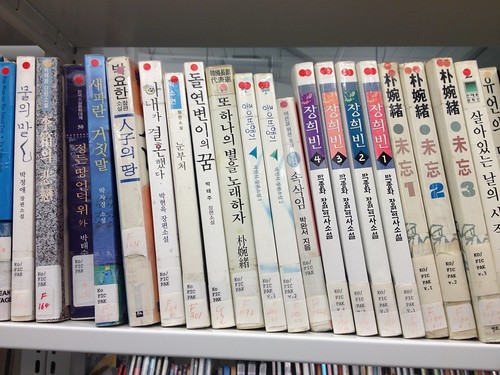 I feel like such a dork for not realizing that. Of course, I don't know which Asian language or languages this is, but there was a whole row of such books. It also made me realize that, although I knew it, lending libraries are global. If you speak Spanish, but your library doesn't carry Spanish-language books, the reach of a lending library means you can get books in your language. This is a head-to-desk realization.

When I was growing up, inter-library loan was a thing. Mainly, it was in the loaning of large print or Braille books. I knew people who would go to the local library and ask for the list of large print books. They had to wait awhile because these came from the big libraries or, in some cases, the university libraries, but they would arrive to our little library in Monona. I remember the librarian let me see one. Whoa! 18, 24, 28 point type. A 150 page book could balloon in page size to double that. You could kill small animals with the size of the book. But the librarian emphasized that people with failing eyesight should be allowed to read, too.

Libraries have had to remake themselves as the world goes digital. The days are long gone where you could wander the stacks of a library, finding treasures in the back; books which hadn't been checked out in 10 years. I loved to look through those, even if I didn't check them out. My local library has removed some of their stacks, replaced by an increase in the display area of periodicals (I'm not against that.), more music and movie offerings; and more classes. I have a cross-stitch club I go to every fourth Tuesday of the month, assuming I'm not traveling. There are more computers available for those without reliable access. But the large number of stacks, which I remember wandering in the 1980's, are gone. It's just the nature of a library nowadays. If I want something, they can get it via inter-library loan, but I do miss wandering and finding something I didn't know existed.

This library in Albany Park, was sparse from a browsing point of view. They are heavily focused into community programs. Being part of the Chicago Library system, there is no need to have a vast amount of paper materials in the building. Instant access in requesting books is provided. You can do it yourself from one of the terminals around the library. They have an outdoor reading area where you bring your own things or books you have checked out. It was quite inviting.

I have great fondness for the library I grew up with. That is probably as much due to the librarian who was very invested in getting kids and their parents to read. It was just assumed you went there. That libraries address the reading needs of their diverse communities should not have come as a surprise to me. I'm kind of ashamed it never occurred to me before I had to inspect one.