With a flurry of excitement, M&Ms announced a new flavor; caramel. /sigh. If you've spent any time here, you know I've been less than enthusiastic about their attempts to broaden their flavor base. It's kind of ridiculous. M&M/Mars holds a commanding lead in market share in the American chocolate market. They don't need to make anything other than M&Ms in plain, peanut, peanut butter, and pretzel, and they would still trounce anyone else. But they seem to always be trying something else.

Chocolate and caramel are a winning combination, however. Milky Way and Snickers bars have delicious gooey caramel. Cadbury has a chocolate caramel bar that is amazing. I should give this a try; that is, if I can find it. Reports were Wal*Mart had them, but I refuse to go to Wal*Mart unless that is the only place to buy something which is life-saving. M&Ms with caramel is not lifesaving.

Then, I found them on a site looking to position itself as an Amazon alternative; jet.com. The bag was cheaper than I anticipated finding it in the store for this size. So, I bought it. I have since found out that Jet.com is owned by Wal*Mart so I'm in a quandary. I refuse to overtly give the Waltons any of my money because I know how much they pay their workers; how a friend of mine had to apply for foodstamps because a supervisor who didn't like her, cut her pay in an attempt to get her to quit. (It was a very nasty story. That supervisor was, eventually, fired from Wal*Mart because she picked on not just my friend, but also others. Yet the corporate culture is such that employees can be subject to the whims of a supervisor who simply doesn't like them, with little recourse unless others speak up.) I will have to consider the use of this service versus the use of Amazon which I'm not fond of because of its world domination perception.

Anyway, the M&Ms came to my door in a padded mailer. Inside was the bag of M&Ms and this. 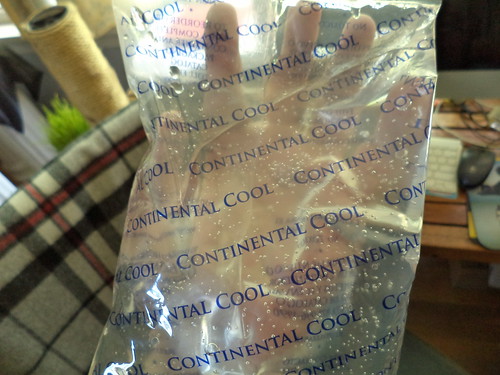 I should mention the mailer with the M&Ms arrived while I was at work. I suspected, when I saw the "Expected delivery date" on the shipping form, it would arrive when I was not at home. I had a bit of worry I'd pull out a mass of liquified chocolate mixed with caramel. That wasn't the case. It was still cool on the inside of the mailer. 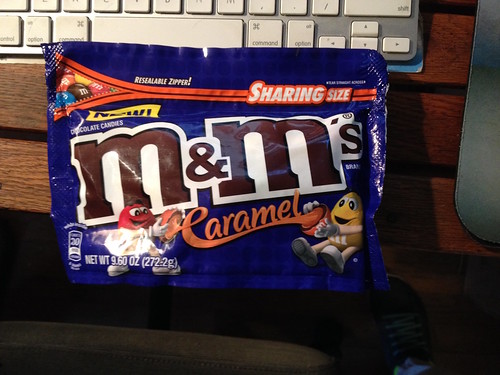 Although the graphic on the front would suggest the caramel was liquid, that is not so. It is chewy. I found it a delightful soft chew. I feel, if it were the more liquid caramel of, say the Milky Way, there would be little of the caramel taste. It would disappear from your tongue before you had a chance to actively combine chocolate and caramel. They didn't put hard caramel centers because you couldn't eat them one after another, if they were the hard caramels. I'm actually impressed that thought and probably not a little testing went into this design.

I give these two decided thumbs up. If you like M&Ms, I recommend you seek out a package and give them a try. "Sharing Size"? I think not. Get your own.