Having pulled weeds from around the deck, it was time to look at deck flowers. The big thing is where do I want to sit when I'm out there. Last year, I sat with my back to the west deck wall. That was nice, but surrounding the birdbath with flowers, while pretty, didn't seem to be conducive to birds actually using it. To me, it appears big enough to find, but maybe all the foliage around it was scary to them. In placing feeders, you are told to put them where birds have a visible means of escape, should a predator come by. Perhaps that is true of birdbaths.

I think I shall put the chair up against the house this year, adjacent to the back door. I moved the geraniums to the deck, which means it's officially deck time. I have to repot all but the large one as those eggs I saw last year are all over the tops of the small geraniums. I also think the white one will have to be replaced. It didn't overwinter very well.

The geraniums will go along the north deck wall, where they get full benefit of the afternoon sun. Then, I'll put a couple of pots along the west deck wall and leave open, mostly, the birdbath.

I started with the small pot which will, probably, sit on the southwest corner at an angle. 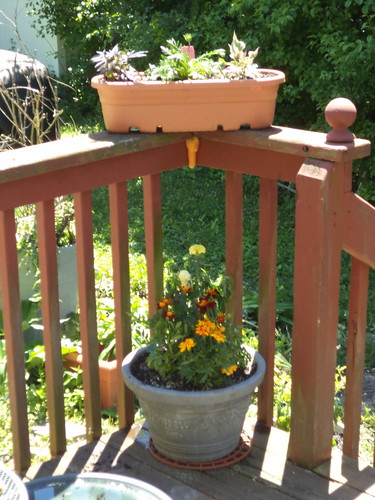 It contains two different colors of sweet potato vines and a plant in the middle that opens during the day but closes at night which I can't remember the name of, but I left the pink tag so when I can't remember, I can look at the tag. Below that is a pot of all marigolds. I love marigolds.

Next up, I filled a couple pots for adjacent to the birdbath. 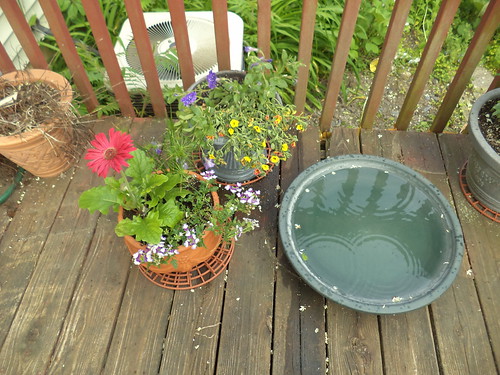 There are petunias, including a "wave" petunia in shades of yellow and orange, in the back pot. In front is a verbena, a Gerbera daisy, and a strange plant I knew I had to have. I'm not sure I left the pink tag in that pot so I don't remember what it was. The verbena is supposed to cascade over the side. The daisy just called to me. Such a vibrant color.

Yesterday, before heading to cross-stitch club, I took care of the front step flowers. 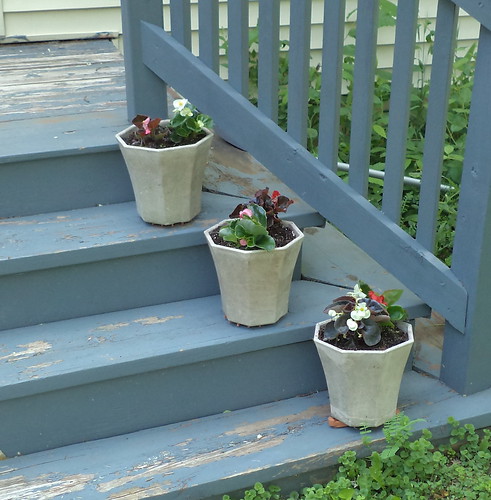 I keep coming back to begonias. I tried impatiens but they did not do well here. Normally, the plants are on the south side of the steps but I had to replace my dairy box this year and it's an actual Coleman cooler, twice the size of the old box. It couldn't be at the top of the steps where the old one sat. This means the begonias have to be on the north side of the steps. I don't know how that will work since begonias prefer shade and this side gets half again as much sun as sitting against the south handrail, but we'll see.

In the span of three days, I reduced the four boxes to two. What's left are more verbena for a pot, three cosmos, and the plants for the front by the arbor. I have seed packets I want to try this year so one pot is being given over to seeds. The arbor area needs to be weeded and a couple of volunteer trees trimmed way back and sprayed with Round-Up in an attempt to kill them. That's a weekend project, not something to tackle after a full day at work. Also on the docket is weeding the front flower bed to the north of the steps. You can see the green through the hand rail. That's where another birdbath sits and where the hummingbird and seed feeders go.

All of these projects take 90 minutes to 2 hours to complete, at best. This is what I need to remember to do. Pace myself. Do a bit here and there. It's important to create an inviting space, one I want to be in. Small steps this past weekend toward that goal.