This is going a bit better than I expected. I can finish a book about every 3-4 days. It does mean, to read the whole series, I need to read a book a week, but that seems a reasonable goal. I finished book 6 last week. 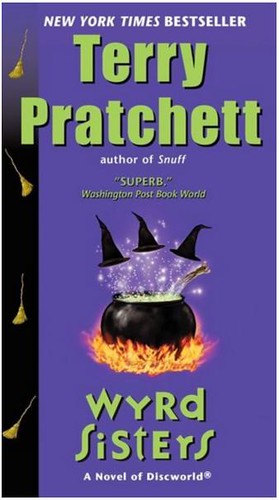 It's the return of Granny (Esme) Weatherwax and introduces Nanny Og and Magrat. (I kept reading her name as "Margrat". It was just easier, eventually, to acknowledge I don't see her name as written, but, right now, she doesn't seem to mind.)

I think this is the first book where many threads of a story are introduced, left dangling, and then tied up somewhat neatly at the end, with the thought that some of the characters introduced will be back in later books. This is a rollicking good read and stands alone as a story in and of itself. You don't need to have read "Equal Rites" to get a feel for who Granny is. She's softer in this book. I still felt she was a bit of a bully, but the storming into lives and simply demanding people do what she thinks should be done, has been softened. She's got two other witches acting as foils and, although they aren't the fierce character she is, they are written as having good and nobel and right answers to the problems posed in the book.

The story, around which all the other threads dangle is that the king of Lancre is murdered by his brother. The king had a son and sympathetic guardsmen scooped up the infant and got him out of the castle immediately after the king's demise. He's given to the witches who place him with a traveling theatre troupe. The boy grows up within the theatre. The duke, who murdered his brother, makes life hard for the witches and goes increasingly mad.

The story is built on Macbeth with bits of Shakespeare's lines wandering through the book, not quite lost, but not quite sure why they are here. "Is this a dagger I see before me?" and "Out out damned spot!" make appearances and the duke's madness owes its origins to Lady Macbeth's madness. If you know Macbeth, you'll laugh at how that play weaves its way through the chapters.

What I liked best, was the discussion of the theatre versus magic. I think this quote sums things up nicely. The theatre troupe is called to Lancre to stage a play where the king who died is portrayed as horrible and the duke is portrayed as nobel. (You'll recognize that trope from Hamlet.) The witches are increasingly accosted as evil in the kingdom where they live and have lived all their lives. They lead respectable lives and people depended upon them, but the duke feels they know too much and he needs to destroy them. "Double, double, toil and trouble" shows up too.

The witches attend the premier performance of this play where the language of the theatre will be used to rewrite history.

"Granny subsided into unaccustomed, troubled silence, and tried to listen to the prologue. The theater worried her. It had a magic of its own, one that didn't belong to her, one that wasn't in her control. It changed the world, and said things were otherwise than they were. And it was worse than that. It was magic that didn't belong to magical people. It was commanded by ordinary people, who didn't know the rules. They altered the world because it sounded better."


I never looked at the theatre in that way before. I've read this book previously, but I didn't remember much of the story. I came into the book expecting to dislike Granny and felt, with this paragraph, a kind of sadness for her. This isn't what she's used to and it really bothered her.

And yet, there is a magic in the theatre. A well-written, well-staged play is like bottled magic. It transports you to a different view of a story. Pulitzer Prize winning plays get that recognition because they envelope you and have you see things just a bit differently. Even something as silly as "Spamalot" has a wonderful kind of magic that helps you forget your cares for 3 hours. Best of all, that magic belongs to us and we can all see it, feel it, touch it.

Things work out in the end, although there is some question about the new king of Lancre. I'm hoping that gets resolved down the road. Now, it's on to new people in a different section of Discworld. I'm a third of the way into book #7.