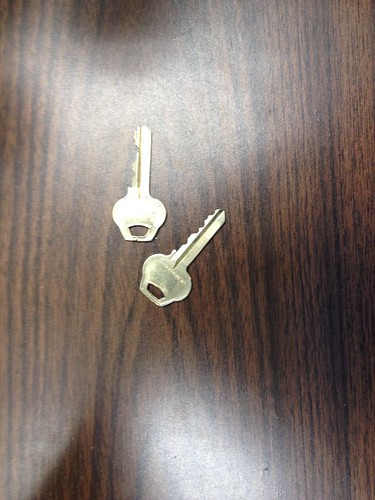 The former office keys. Yes, there were two of them. We had the building doors to pass through before getting to the office doors. The locks were changed twice in the 16 years I was in the building; the first time when we moved across the hall and took over the space vacated by some real estate company, and the second time when an employee was fired. This new space has one key. We have a front and a back door, but they are keyed the same. AND, that key is a much lighter weight silver-colored thing. The change in weight of my key ring has been very noticeable.

We hired a cleaning company to clean our new offices twice a month. They also do close-outs so we hired them to clean the old space. It was amazing. The building owners were responsible for the cleaning company and we must have gone through at least 8 different companies in 16 years. You saw the ants on my windowsill. Yeah. They just didn't clean everywhere. This new company cleaned the faceplates on the light switches, dusted and washed all the walls and cleaned blinds. When I met the cleaning company's estimator at the old office she looked at me and asked when the last time was the blinds were cleaned. Darned if I know. We had vertical blinds in the old office and some of them were not working properly. We gave up trying to get them fixed. They were not wiped clean. 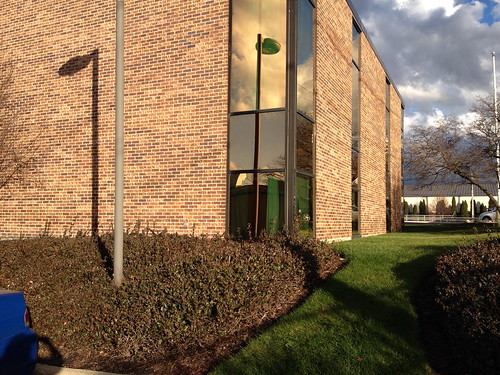 I had this corner office on the first floor. It's a southwest corner, but those windows leaked so badly. My office was usually 8-10 degrees colder than the other offices. I would have a space heater under my desk in the summer, too, because the AC seemed to think it was cooling the entire Chicagoland area and blast on high all day. In the winter, the space never heated up. It would be 78 in other offices and 68 in mine. It's tough to type when your office is 65 when you walk into it in the morning. 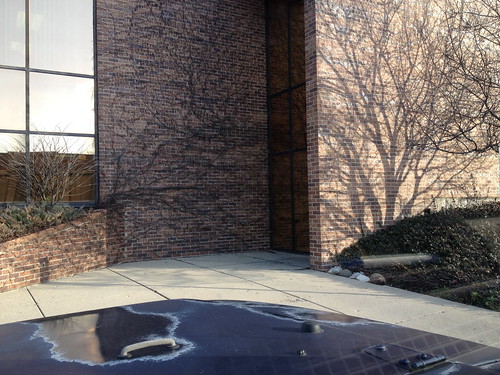 This is the front door. In the fall, the leaves from the vines growing on the wall would collect in front of the door. It was kind of interesting from a science standpoint because the design would cause air to swirl in front of the door. You'd get this great pile of leaves in that nook, leaves which would then stick to your shoes after a rain and get tracked into the building.

The current landlord has been trying to sell the building for 3 years. We almost never saw anyone from the management company and I often felt that when we would call about replacing lights or fixing broken things, I was being an annoyance to them. It wasn't unusual to come to work and find the building locked up. Maintenance hadn't gotten over to unlock the doors. This building was also last on the route for snow removal. They considered tossing buckets of salt on the walk, "clearing the snow".

I got the "honor", if you will, of doing the final walk-through, since I'd been in the building the longest. The cleaning company had done a wonderful job. There wasn't much of a deposit to get back, but Mike wanted every penny. The air still smelled of lemon cleaning products. Yes, 8 years of wear on the carpet showed and there were a couple of corners which were dinged, but the space looked great for as dirty as we could get it. The gal who walked through the space with me seemed more annoyed at having to do this than really looking at what we'd done. We made small talk about our move and parted. I did one final walk around. I mentioned this back in December when we officially moved north. I didn't feel attached to the space as I thought I would. 16 years is a long time, any more, to be with a company AND to be in one space. Yet, I don't miss it. I come here every morning now. We have our number on the door, which helps because each one of us had driven by the office trying to find it. I have a nice east view out my window. Squirrels cavort in the pine tree. It just feels more pleasant. I don't mind the drive each way. It's actually quite relaxing.

Running errands over the past weekend, I wondered if my keys would still work. Our lease at the old space ended last Sunday. I was tempted to swing by the building to see if I could still get in. How often do companies change locks, I wondered? The building isn't on any closed circuit security camera so I could let myself in and out with no problem. Would they rekey the outer door, too, if they rent the space? Could I get in over the weekend to use the bathroom, say?

We've all put our old keys in our desk drawers. I think Gene actually tossed his, but the rest of us have a bit of nostalgia for those keys. Eventually, I'll recycle them or give them to someone doing a craft project with keys. For now, they are a reminder of where I spent 16 years of my life.