My job takes me a variety of places. Most are what could be termed "usual"; a house, a business, a building. Occasionally, I find myself in some place different. Such was the case a couple months ago.

The City of Chicago is a big land mass. If you live "in the city", you generally reference where you live by the neighborhood. In November of last year, the magazine Mental Floss, published an article explaining how the various Chicago neighborhoods got their nicknames. It's worth a read to see how much of a melting pot Chicago was and still is.

The job I had to do took me to the tony "Gold Coast" area, so named for the rich members of Chicago society settling here in the late 19th and early 20th centuries. I had to inspect parts of a building around a remodel. The area to be remodeled sold, a few years back for over 5 million dollars. You read that right. Five MILLION dollars. It's 5500 square feet in a building that dates to the 1930's. The elevators are tiny, tiny and parking is, well, almost non-existent. There is a reciprocal agreement with adjacent buildings for condo owners in this building to park "overflow" vehicles for a monthly fee. I don't know what "overflow" actually means.

What would compel someone to toss that amount of money at a condo? Well, you're steps off Michigan Avenue, although I don't know where a grocery store is. If you bought a new sofa, I'm not exactly sure how they would get it into your home, given the dimensions of the elevators. And although I see why the current owners are doing a remodel of the space for which they paid millions, the sheer movement of old material out and new material in is going to be a headache for the construction company. Why would you spend that kind of money?

Perhaps it's the view. 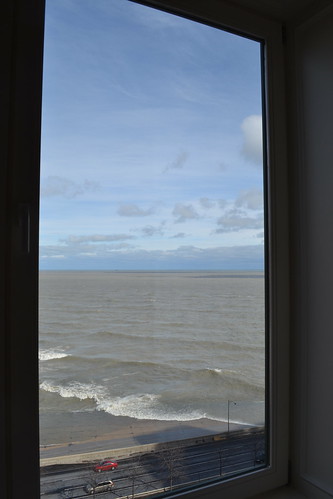 This particular building, once you got above the 9th floor had unobstructed views of Lake Michigan. 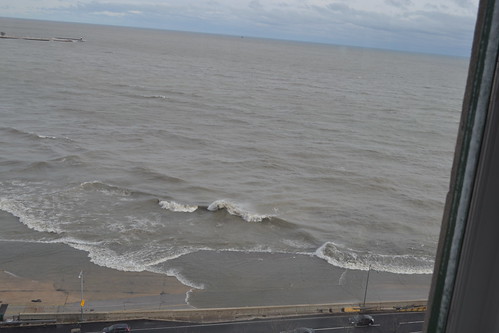 There was a bit to the east, but more to the northeast and north. 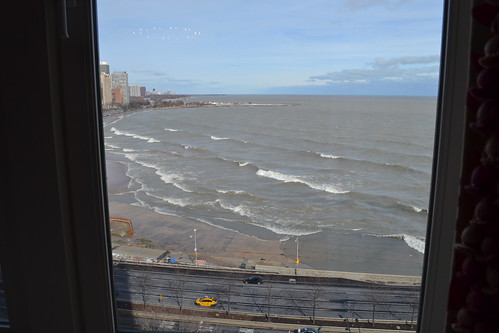 Is this a million dollar view? I don't know. It was cool the day I was there. The windows had deep sills where you could put pillows and sit and read while looking out over a large expanse of water. But I wonder how I would feel about night.

One of the attractions of a city like Chicago is how it looks at night. There's an almost Christmas quality to the city, with all the lights. I am, also, a big fan of dark skies, mainly because I love to look up and see stars. Do you get that with a view like this or do you simply get the mass of black, black gray, gray, and blue black which comes with night in the city.

On the day I was there, the view was lovely, not impressive, but lovely. The lake is always in motion; some times more active than other times. It would be ever changing. For my money, it's not worth millions to watch it. What do you think?