It's euphemistically called "the creeping crud" and I got it in the middle of January. I thought it was just allergies; that all the new construction and paint in the office was finally getting to me. Hence, I treated it like an allergy. Yeah, well, about that...

It was nothing more than a heavy cold. Well, a heavy cold that knocked me out for a week. The great thing, if there is such a thing with a cold, is that it's conducive to reading. I can't breathe through my nose. I'm exhausted so I'll take a quick nap that devolves into a 3-4 hour sleep. That means, I'm wide awake at 2 a.m., glaring at the alarm clock. Oh well. Get out of bed, settle into the recliner and pick up my latest Discworld book.

I finished the first 4 in January. Now, before you say, "Whoa, that's a lot of reading", understand that Discworld books are wonderfully quick reads. There are underlying meanings and commentaries, if you choose to look for them. Otherwise, they are whoppin' good yarns. Pratchett is great at telling stories and, superficially, you can knock off one of his books in 3-4 days, a week tops. The other thing you should know, I've read all of these before, not in order, other than the first two, but over the course of years, I've read them. I don't always remember them but I have read them because they were in the basement, in the stack. So, a second read goes a bit faster than a first read. 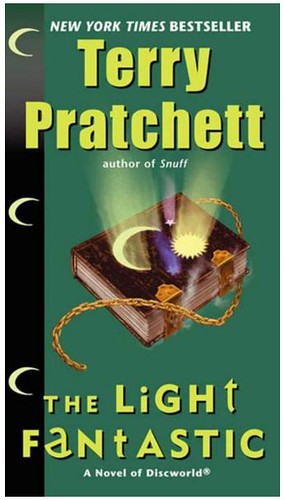 This is the second book of the introduction to the Discworld. The first book ends in somewhat of a cliffhanger. You wonder what will happen to Rincewind, Twoflower and the Luggage. The book takes a bit of love to get into. It could be read as a stand alone book, but, in reality, 80% of the story comes from "The Colour of Magic", so I recommend you read that first. There are more topical references in this book than in "Colour of Magic", so someone looking for the Pratchett wit won't be disappointed. I thought it might not be as quotable, but, once it gets going, the quotable parts come fast and furious. "It is said that the opposite of noise is silence. This isn't true. Silence is only the absence of noise." "...darkness isn't the opposite of light, it is simply its absence."

The metaphorical Pratchett makes its first appearance here. Read those quotes. The opposite of [insert word] is its absence. I remember, when I was a junior in high school, we took a two week family vacation, which was a drive through the mid-south, following, sort of, the meander of the Mississippi River to the gulf. One of our stops was Mammoth Cave in Kentucky. There were a number of tours of the cave you could take. We took one which was 90 minutes underground. I remember, at one point, the ranger said, "Now, we're going to ask you to sit here (indicating a seating area) and we're going to turn off our lanterns and I'd like to ask you to be completely still for two minutes. I have a timer so you'll know when 2 minutes is up. Trust me. That will seem like an eternity." When Pratchett says the opposite is absence, that's what I remember. The black dark; total absence of light. It was creepy. Add to that, no noise. Where we were didn't have any water in it, although there are places in the cave which have running or dripping water.

I remember the eerie silence. We sat there for 2 minutes and it did feel like an eternity. You started to hear your breathing and your heart beating. I think, as humans, we crave light and noise. Even now, quiet, for me, includes hearing Pilchard snore, or the tapping of computer keys or the crimple of the page of a book as it's turned. We could not live without light and sound. 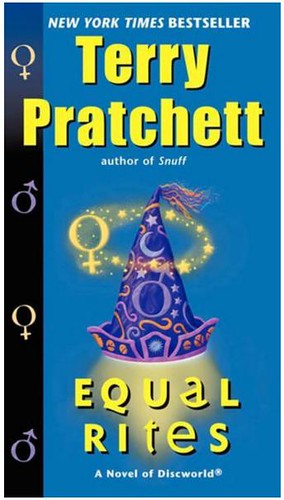 This is the third book. There are a lot of characters on the Discworld and Pratchett introduced them in a higgledy-piggledy fashion. I'm focused on reading the books in chronological order, which is far different, other than books 1 and 2, to how they were written. It might be fun, in 5 year's time, to read these in the order they were written, to see how that compares to the chronology.

This book introduces Esme (Granny) Weatherwax, one of the more colorful characters on the Disc. I like her in later books where she is a character, but, in rereading this book, I don't like her here. The book attempts to lampoon the idea that there is "women's work" and "men's work". Women can't be wizards and men can't be witches, "...because of the lore". It's a feeble excuse and this is meant to highlight how limitations in what men and women can do are silly.

Granny's purpose is to come to grips with the idea that Esk, the other female character in the book, can be a wizard because she's the 7th child of a 7th son. Technically, the 7th child should be a boy so when the wizard staff is given to the baby, the wizard magic is passed to a male. But that doesn't work out. Granny struggles against convention and, eventually, comes to see that Esk's training needs to be in wizarding and so she has to go where no woman has gone before; Unseen University and wizard training. The problem is how this message is transmitted.

Granny comes across as a bully. When she's not mildly bullying Esk, she's openly bullying the adults she meets. This is, perhaps, meant to say that her age and wisdom give her an advantage to know that her opinion is the right one, if they would just go along with it without question. But, I felt, many times during the book, uncomfortable with how she was portrayed. She's generally, though not always, right, but this is depicted as only because she glares at people and makes them uncomfortable. That's not depth of character so much as bullying. I didn't see that the first reading through. I'm fairly certain she evens out in temperament in later books so I'm treating this as an introductory story where the character is here and let's see what other adventures she can have later. I don't remember if I've read of Esk after this book. I'm hopeful she will be further developed. I don't remember if she was successful in her studies. 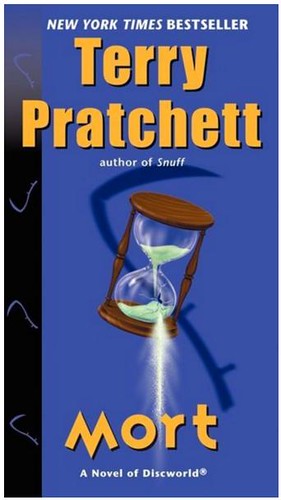 Finally, I finished this one on Sunday. It takes a bit for this tale to get going. A full 2/3rds of the book is setting up the last 1/3rd which sucks you in and makes you want to keep going, even though it's way past your bed time.

The personality that is DEATH, i.e. "Mort", a pun of which everyone in the book seems to be aware, is more fully explained, but, again, I don't like him nearly as much in this book as in later books. I think DEATH was meant to be a major character all along but getting him to a point of continuity would be bumpy.

The actual ending of the book, the last 3-4 pages, feels jerky. I didn't like the segue from the real climax to the end. Too much was left unsaid, unfinished and I don't think it ever gets tied up. In a way, it felt as if Pratchett had created a conflict he couldn't quite resolve in the direction the ending was going. Essentially, DEATH takes an apprentice and the story revolves around the growth of that apprentice into the job and DEATH's foray into the world of the living to figure out why we like life.

Two characters of note show up; Rincewind, of the first two books, and Albert, DEATH's manservant. Albert becomes important again in a later book and I'd forgotten his backstory. Rincewind, however, feels like an afterthought. The person he is could have been named "Bob" and it would not have changed the story. And how Rincewind got to the position he's in is never explained and that, I feel, is a big oversight. Maybe it will come later, I don't know. Rincewind kind of disappears from the series, if I remember correctly.

This isn't as much of a quotable Pratchett as his other books are. The musing on mortality, given Pratchett's death last year, was poignant. "Reality is not always what it seems," is probably the best. The book deals heavily with what is and is not real and how one person can change reality. Still this is worth picking up for a long plane ride. It will have you wondering, as DEATH does, "WHY IS THERE A CHERRY ON A STICK IN THIS DRINK. IT'S NOT AS IF IT DOES ANYTHING FOR THE FLAVOR. WHY DOES ANYONE TAKE A PERFECTLY GOOD DRINK AND THEN PUT A CHERRY ON A POLE?" (DEATH's name is always capitalized and everything he says is capitalized.) My friend, Pam, does not like maraschino cherries. I don't think I knew that when I read this book the first time. When I encountered this quote this time, I laughed so hard. She agreed with DEATH's sentiment.

I'm about a third of the way through book #5, "Sourcery". It contains my all-time favorite Pratchett quote, but I'll leave that for the review. So, this is math, but, if I've done my math correctly, I'm reading #5 and there are 40-ish total books, so I'm 1/8th of the way through the series? That doesn't sound so intimidating. When this task is looked at as, there are 40 books and I've read 4 which means there are 36 more to go, it feels like I won't make it. I'm going to do this. This is my goal for 2016.