Here's another collection of things I saw worthy enough for a photograph.

I visited Carole at the end of October. On the way back, I needed a restroom and some tea. Dunkin' Donuts is my go-to place for tea, except, maybe, in western Pennsylvania. 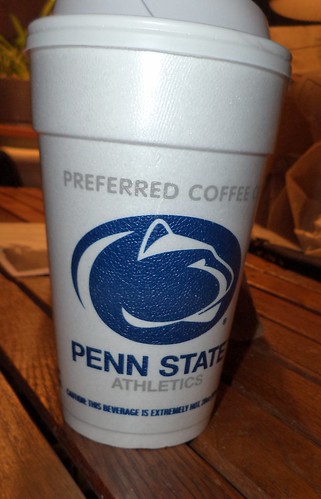 I couldn't toss this even after I'd finished the tea because I can recycle the cup in my recycling. So, a Penn State item made its way into my Iowa Hawkeye house. The tea is always good, even if it came in the wrong color cup. 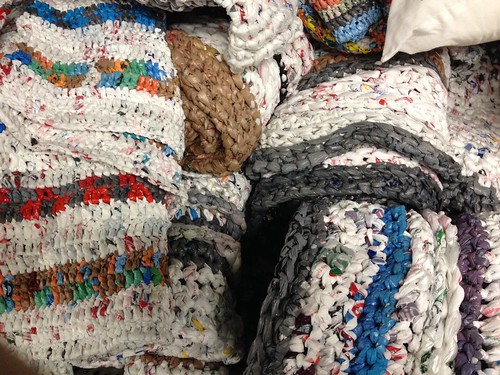 I've always wanted to make a braided rug. I used to have one that my great-great aunt made. She used wool scraps from a variety of sources. It wore really well for awhile and then disintegrated one day as I was, I thought, gently shaking out crumbs and dirt. I have a booklet that tells me how to make these kinds of rugs and it seems easy enough. It's a great way to use up fabric and is a craft that ties us to our ancestors.

What so great about these rugs, seen in a building I was inspecting, is that they are made from plastic bags. I'm not kidding. I saw these and knew, right away, what they were. I've known, for a long time, about places doing this. It's a great fund raiser for groups and a number of homeless shelters will have residents make rugs. If you accumulate a lot of bags and have no place to recycle them, it might be something you'd like to try. Here's a tutorial on the process.

I loved the colors in the stack. I didn't find out if they sold any of these or, because there were a lot of them, and bags, shoved onto this shelf unit, had the bottom dropped out of sale of plastic bag braided rugs. 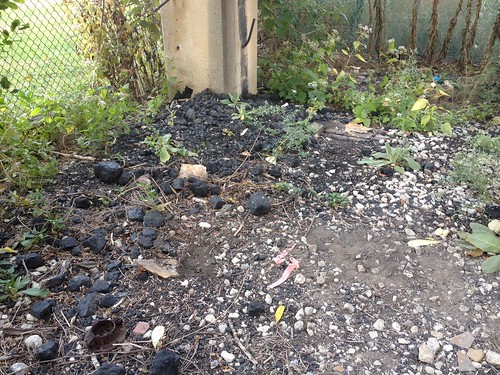 Seriously. That's coal on the ground. Some of the people I were with had never seen real coal. Who knows how long it's been here. It's not something that's going to decompose quickly.

Seeing it brought back memories of the manual furnace that heated the farm house I grew up in. We used wood and coal. Coal gave off a smell, but burned for a long time and gave off a lot of heat, once you got it lit. Dad would start the fire in the fall with wood and then toss in the coal. We sometimes had to endure a warm house because he didn't want the fire to go out and have to start the process all over again if the warm spell was going to be just a few days. In the morning, the house was often chilly as the fire wound down, and we got dressed for school in the kitchen with the oven door open to remove the chill from the air.

The chimney had to be cleaned periodically because the layers of soot deposited on the inside could catch fire. We had that happen once. I remember sitting on the steps in the unheated back entry because the soot in the chimney caught fire. We were wrapped in blankets to keep warm. Mom and dad were dousing the red hot coal fire with water in an attempt to create enough steam to put out the chimney fire. Oh the smell and the smoke! Windows and doors were open to create drafts to get the smoke out of the house. I remember having to clean everything for weeks afterward because there was a thin layer of soot everywhere. 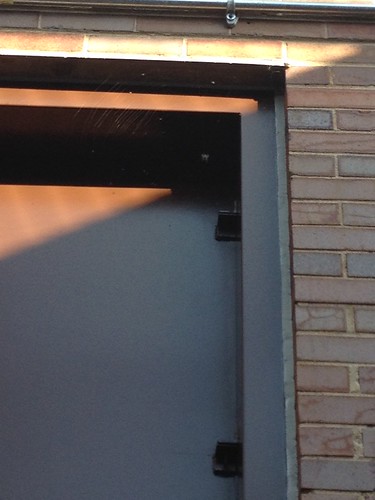 It's hard to see, but there is a spider the size of a half-dollar in the upper right corner of this door. Two of my co-workers are very scared of spiders. I would not have a tarantula in my house nor would I stroke one or pick one up or have one crawl across my hand. I'm not, however, terrified of spiders. I usually try to herd them onto the fly swatter or a piece of paper and toss them outside. They do more good out there anyway.

I don't think this gal spun a web in a food-rich environment. This was a courtyard, surrounded by 10 foot tall brick walls and covered with a mesh grating. I'm seeing very tiny spiders in the house now, spiders who were hatched at the middle of fall and who are looking for food before dying off in the winter. They just sort of show up, in the dish drainer, in the corner of windows, in front of books in the bookcase. I just look at them and wonder why they thought where they are was going to yield any sort of meal. Then I squash them. 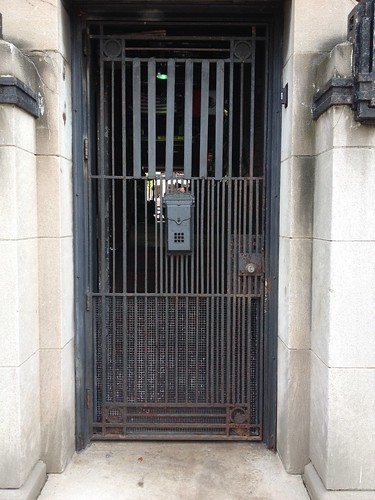 This was the main entry to a warehouse. The building was built in the 1930's and was reused in the 1980's as a warehouse. Security doors aren't made like this anymore. 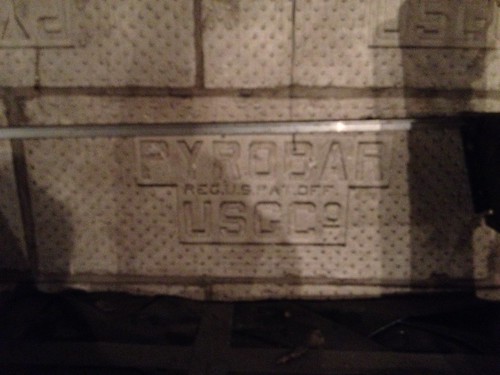 A bunch of blocks. I was in a basement and these blocks date from the 1930's. What's so special about these blocks? Well, I don't know much about building construction, particularly older construction. They are interesting on their own and make me curious. What struck me was the Reg. US. Pat. Off. mark. Reguspatoff. I know it stands for "Registered, US Patent Office", meaning the bricks have a patent. It was also the name of a computer in a Saturday morning cartoon.

Someone told me it was in Rocky and Bullwinkle but that was the WAYBACK machine, which was an homage to the UNIVAC from the early age of computing. That age coincided with the germination in Jay Ward's mind, of a subversive cartoon which has just as much relevance to today as it did back in the late 1950's and early 1960's. Find and watch "The Boxtop Robbery" or "Wossamotta U". (The Wossamotta U fight song is directly purloined from the fight song for the Minnesota Golden Gophers. I can't hear their fight song without singing, "Wossamotta, hats off to you. To your colors, ocher and Alice Blue. We shall e're be faithful and true. Hail Wossamotta hail. Better we should be in jail. Hail Wossamotta U.")

Back to Reguspatoff. I'm almost certain it was in Underdog, but I can't find independent confirmation. Since I don't get cable, I can't watch Cartoon Network which might have Underdog on the schedule. Seeing this on these bricks made me snicker. I didn't point this out to my companions as I was pretty sure none of them had the same frame of reference I did.

Finally, I saw this in the basement of a building. 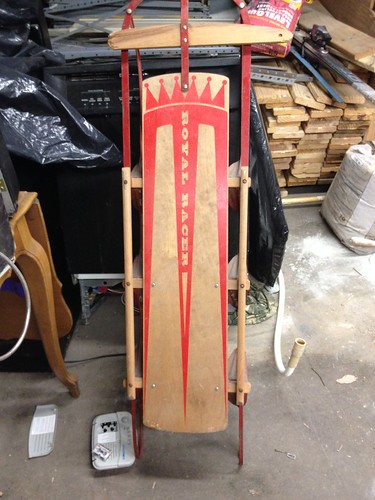 I would go again. Grab the great nieces and nephews, find a hill with a soft landing, put on layers and layers and go sledding. We would start up by the garage and, if lucky, you'd make it all the way down the hill past the barn and to the bridge over the creek. Sometimes, if conditions were right, you could get across the bridge, onto the flat beyond and up the other side of the hill a bit. Ice was the worst. Hit a patch and you lost control. We'd spend hours outside. It took a good 10 minutes to drag the sled back up to the garage to ride it down again, always hoping for just the right mix of speed and dexterity to go even farther up the other side than you had before.

Sometimes, it was too dangerous to go down the hill by the barn, so we'd try to see if we could make it around the windmill and over the hump by the house. Hairpin curves are not a sled's forte. You made wide, sweeping curves. If you had to swerve quickly, the best course of action was to simply fall off the sled, which resulted in faces full of snow and lots and lots of laughter. Yeah, I'd do it again.