With the end of October, a month of meeting oneself coming and going ends. The travels of the month brought the opportunity to experience different food.

We're working on the near north side of Chicago, the Uptown Neighborhood. At the corner of Wilson and Broadway is a restaurant where we find ourselves eating quite frequently. Our first visit was way back in September. At the time, we were just starting this job and none of us processed that we'd wind up being recognized by face.

They have a very wide menu. It's nothing flashy and they have next to nothing for dessert. They tout that they now serve liquor, but I think their selling point is visibility in the neighborhood and good food, really good, simple, satisfying food. You know there will be photos. 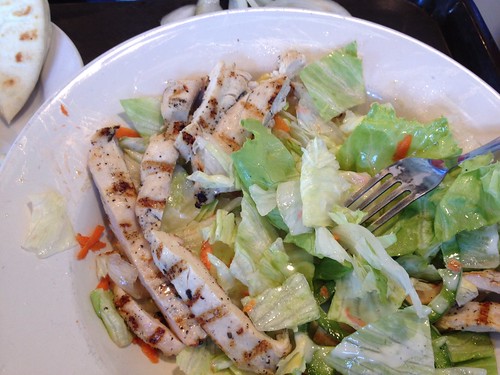 Chicken salad. It was huge and the chicken was so tender. It's served with warm pita bread. 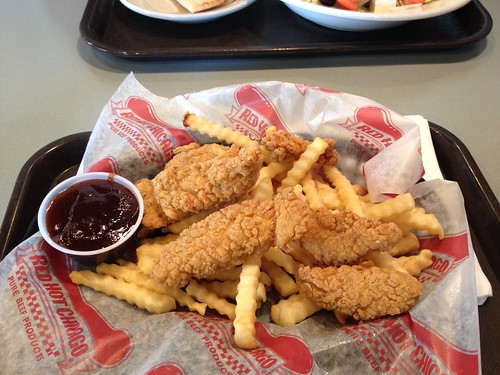 Chicken fingers and fries. It's hard to do this wrong, but I've had some really bad versions. This basket came with crispy, thoroughly cooked chicken and unseasoned fries. On the tables are the usual salt, pepper, sugar, mustard and ketchup. I got barbecue sauce for dipping. Sometimes, as you eat slowly, the fries can be soggy by the time you get to the bottom. Not these. I think this is my favorite on their menu. 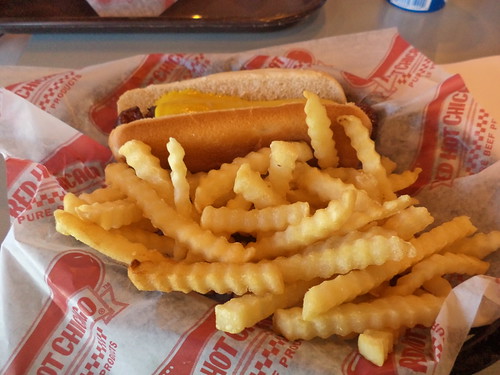 It's a polish. I think this is a distinctive Chicago item. It goes by "polish hot dog" and I've seen it referred to as a Kielbassa. We just refer to it as a "polish". It's denser than a hot dog, and is made of better cuts of meat. That also means it will be more expensive. Chicagoans dump onions, and mustard on a polish, but I've also seen relish, pickles and tomatoes on them. You are really looked down on if you put ketchup on them. I like my polish with mustard and ketchup. Onions and I have never really gotten along. Yes, there are the fries which stayed crispy through the meal.

The cheeseburger was kind of bland. Even with an addition of bacon, it was rather unremarkable. You can see the kitchen where food is made and you know this sandwich wasn't made an hour ago and kept under a heat lamp. Still, I won't order the cheeseburger again. The sticks would be really good with the chicken fingers. We aren't slated to go back until right before Thanksgiving. I think soup will be added to my meal. The best part of all this is the reasonable price for everything. Even though we can expense it, good food at good prices means if you had to spend your own money, you're getting a good value.

It's great when you find a neighborhood place, some small place, that surprises you. There are other places in the area where we could eat, but, when it comes lunch time, it's "We'll meet you at Palla's."