It's that time of year when the smells inside the house are as luscious as the smells outside the house. I made applesauce this weekend. It's hard to look at all the heaping displays of apples in the grocery and not think sauce and pie so I had to give in. 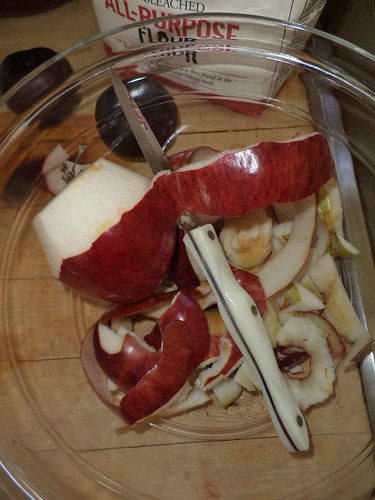 I bought 6 large Cortland Apples, Cortlands don't need a lot of additions once cooked, plus they were on sale. Step one is to peel and core the apples. I don't know about you, but I tend to eat some of the peel as I work. There's goodness in that and it seems like a waste to add to the compost pile. But, I can't eat the peel from 6 apples so quite a bit went to compost. The squirrels will love it. 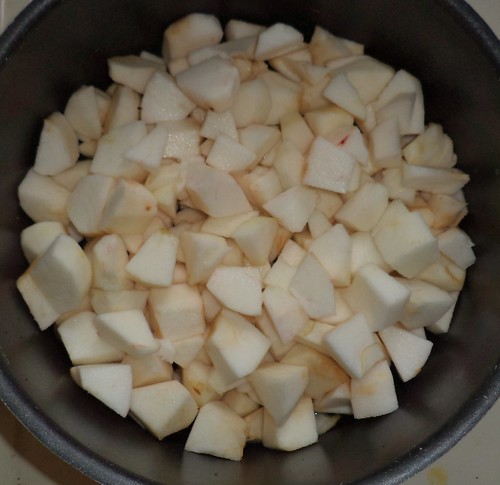 As I'm peeling, I'm dicing these into large chunks. Some recipes tell you to splash lemon juice onto the apple pieces to keep them from browning. It's usually a negligible amount, but I don't. I find that the ones at the bottom don't brown if you're working fairly steadily and covering them with a new layer. Once all the apples were chopped, I added a half cup of water to the dutch oven, put the heat on low, and covered it. 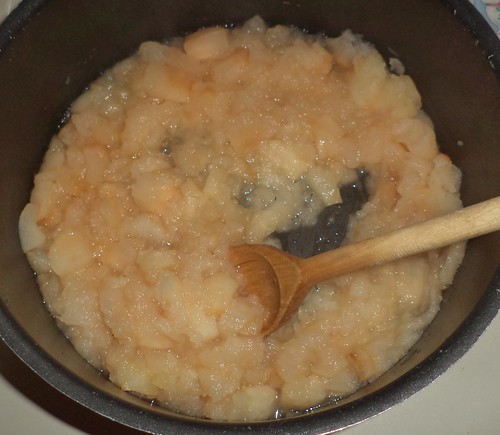 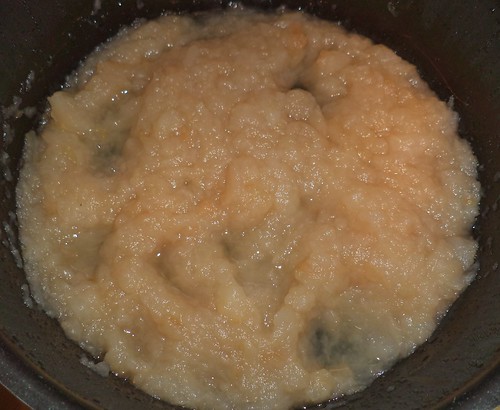 Done. I smashed up the bigger pieces that hadn't fallen apart but this is what the sauce looked like at 40 minutes. A taste and I added about a half teaspoon of plain white sugar. It was just enough to bring out the flavor of the apples. I really debated on adding cinnamon to these but decided they were perfect as is. I should go get more apples and make cinnamon flavor or get some red hots and make pink sauce.

The batch was divided into thirds and put in freezer bags. I have some other fruit to eat so I will save these for November. It took about an hour and a half to go from apple to sauce and my house smelled wonderful. Other kinds of apples will give you different flavors of sauce, some more tart than others and will require a longer cooking time. I'm not a fan of Granny Smith apples, although they are great for pies which need to be transported as they are a very firm apple. I love Gala and Fuji, and they will make wonderful sauce that doesn't need much additions. I had a recipe for apple pear sauce that I made many, many years ago, but I couldn't find it. So, the pears I bought I'll just eat without saucing. Gee, life is tough. Hmmm...here's a recipe for pears with chocolate sauce.