Another item on the list of things to do prior to heading off to Disney World in October is my hair. I want to do something goofy (pun intended) for this event. I've been struggling since January to figure out what to do. I like Great Clips. They do a good job at cutting my hair, but that's all they do, cut hair. If that's what you're looking for, and I am, you simply cannot go wrong.

While, I want to ramp up my hair style and add color for Disney, I love my gray hair. I used to color it because I thought it made me look old. Well, I reached a certain stage of my life and decided I embrace who I am and who I am has gray hair. Plus, the added benefit of age is that I don't particularly care what "convention" says. So, I've been toying, for months, with what to do with my hair.

I finally settled on color; not all over color, but color in sections. I have to remember that people in my industry are fairly conservative and showing up with a mass of blue hair wouldn't be the best move. What could I do which adds the fun and preserves the need for moderation? I honestly don't know, at this point, but I do know I need a haircut. 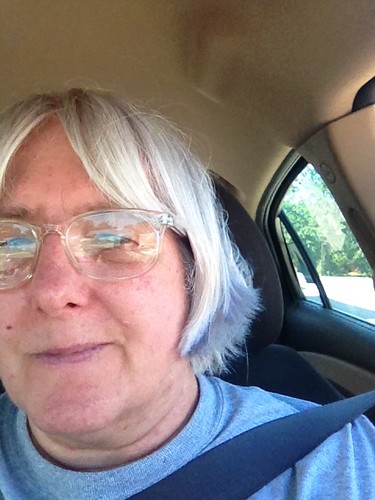 I've been living with a bob for many years. I used to have slightly below shoulder-length gray hair. Somewhere, there is a photo of that. I chopped it off at least 5 years ago because it took too long to dry and was just unmanageable. I do not want to have to blow dry my hair to make it look good. That's not my idea of a good time. I need a cut I can wash, run my fingers through, and head out the door. "Well, you need a circular brush and just 15 minutes in the morning, and you'll look fabulous." Yeah, about that. 15 minutes more spent on my hair is 15 minutes more I could be spending giving ear scritches or sleeping. Not going to happen. If I have to go somewhere needing styling, of course I'll do it, but to the office, nope. So the longer bob is what I've had for a long time. It's an easy cut and it grows out well.

I don't know what it is about my bangs, however. They go from being comfortable to in my face in a week. I generally get a haircut when the bangs start giving me trouble.

I asked friends for salon advice. If I'm going to do color in October, I need to find a good salon now. I need to establish a relationship with someone now. A friend recommended Hairborn Salon which is right on the way to work. I pass it every day. So, I made an appointment with Alex, the salon manager, for last Saturday. We spent 15 minutes talking about ideas. She cut my hair in the same bob shape but emphasized a much shorter back than the front. Almost no hair was trimmed from the front. When she was done, the floor looked like this. 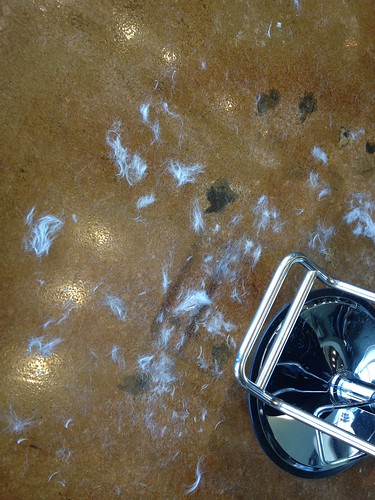 She said she thinned my hair in the back. To me, it felt fine but that's only in thickness. I still had as much hair pieces as usual. It's just that gray hair is not a fat as brown hair. I thought it looked like someone had shorn a poodle or brushed their Australian shepherd. All that was on my head. 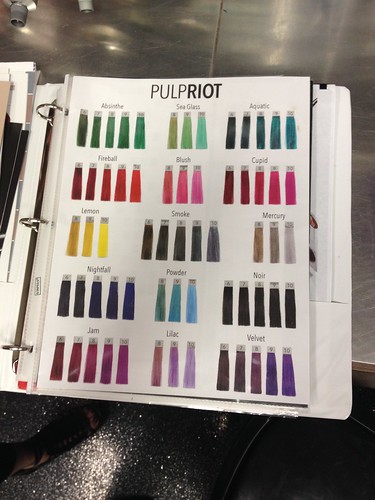 They can do all these and she will make any color I want. I toyed with orange and black stripes because I like Tigger. "I can do that," she said with confidence. The thing about stripes is that they will grow out, which could look weird 6 months down the road, but I could have the color removed. "The great thing about your hair is that it's like a blank canvas. I don't have to bleach out the color before adding color. We can go as wacky as you like." 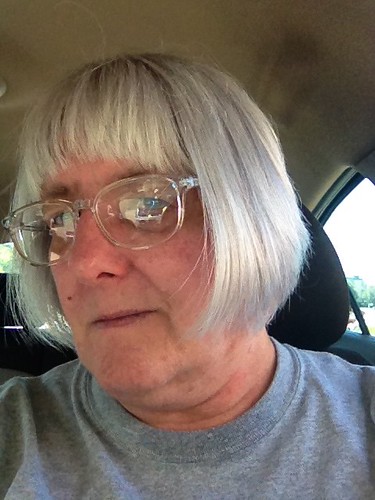 In doing stripes, I'd only put them on one side, from the ear forward. If I did a green stripe at the bottom, that would go all the way around. That could be cut off if the boss deemed it way too much.

Another option would be hair extensions. Those could be dyed any color and would go under my hair. I could have some in green and cream and black and orange. I'm not messing with my hair, just adding to it.

I don't know what I want. I am leaning toward the green vertical stripes on one side, but like the idea of a green stripe all the way around. My friend, Shari, suggested a graduated green where it's mostly Kelly but then gets dark at the ends. That has merit. Should I add the cream or go with green, gray, green? So many choices. It's as bad as the amount of choice you have at Disney. I have until October 7th to figure this out.