While out and about, I come into contact with a lot of different jobs. Of course, my job provokes the "I didn't know that existed" response. But I run across other jobs which need to be done that I wasn't consciously aware of. Take this job. 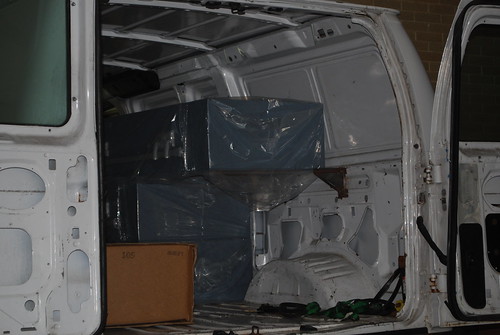 You're going, "Huh?" and you can be forgiven for not having this job on your radar. According to the maintenance man, these are crematorium coffins. Bodies need to be placed in a receptacle when they are cremated and these coffins are made to be those receptacles. The whole thing is cremated. For people wishing a funeral with a body, these serve as the coffin. They are minimally decorated, just tasteful enough to resemble a much more expensive coffin. They are wrapped in plastic to keep them looking nice. In the van were 5 adult size and 2 child size. I think that's what got me, the 2 child size. But crematoriums need to have those on hand.

Somewhere, people make these. And some delivery service picked up a delivery and brought it to where I was. It was a plain panel van. They don't need a lot, just enough.

This is a necessary service but we don't think about it. When you pass on, someone will have created the casket in which your body will reside. My friend, Patt, has made arrangements for a plain wooden box, crafted by monks. You have to order these a long time in advance. She doesn't want the gigantic padded casket so took the planning into her own hands. A monk is making her casket. It will be ready for her and will need to be transported from there to wherever she is buried. Someone will have to do that.

These are the kinds of jobs which fly under the radar. If you've read this space for any length of time, you know I champion these kinds of jobs. To do them, you don't need a college education. It disappoints me when well-meaning professors release yet another study that says college grads earn x times more than high school grads. That's nice, but are college grads driving panel vans making deliveries of coffins to the places that need them?

When you're out and about, think, for a moment, about all the minimum wage jobs you encounter. Those jobs have to be done by someone. Those people should be accorded as much dignity as some lawyer or banker or movie star. I rather think if all the minimum wage people went on strike, we'd shut down, completely.