Back in July, there was a rather large inspection project which started right when I got back from my Virginia vacation. Divided into two halves, I did the bulk of the inspection work which encompassed the Columbarium at Bohemian National Cemetery and a lot of homes on the far east end of the project. I've been in a lot of homes over my 16 years of doing this and I've seen a lot of stuff; some good, some bad, some horrible, some extremely interesting. I'm going to file this under the "I remember that" heading. 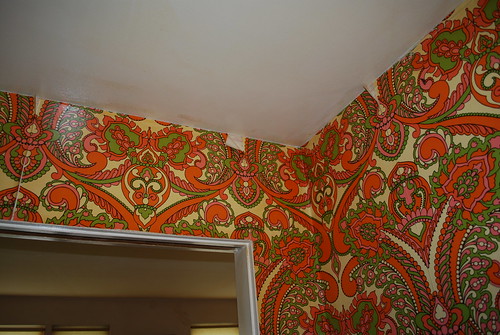 If you are a certain age, this might be vaguely familiar to you. The rest of you are going "Oh...my...god." Sears sold this wall paper at the end of the 60's and into the first couple of years of the 70's. I walked into her kitchen, where this is located, took one look and said one word, "Beatles". She gasped and said, "How do you know?" Truthfully, I don't know myself how I knew but I knew this was a) from Sears and b) inspired by the psychedelic phase of the Beatles, where Peter Max and Yellow Submarine reigned.

It was hard to put it up because it is plasticized. I remember Sears marketing this as easy to remove, back when removing wallpaper generally involved giving up and painting over it. You would not believe how many houses I find where that was the method decided upon to change the wall colors; paint over the wall paper because you couldn't get it off the wall.

The homeowner was living in the house her parents bought when they were newlyweds.  The original kitchen wall paper was yellowing and was stained in places with grease, but her parents weren't interested in removing it. "If you want to change the wallpaper," she remembers mom telling her, "you have to buy the new stuff, take down the old and put up the new on your own. I'm not helping because I don't care if it ever changes." She said she was fresh out of college, working in downtown Chicago at her very first job. She went to the Sears store on State Street, which was the flagship store of the whole chain and paged through the wallpaper books. She was a huge Beatles fan and Sears had a line of wallpapers inspired by the Beatles. She measured and bought enough, with one of her first paychecks, to redo the kitchen. This was in 1972.

The thing about this wallpaper, because it's plasticized, it wears like iron. I saw no fading anywhere and there is a big east window to the left. Oh there are corners which have come undone over the years but a little rubber cement will push those back into place. Grease and stains wipe right off it.

She said she sometimes thinks that she should pull it down and redo the kitchen, "...with maybe more tasteful wallpaper or, perhaps, just paint." She looked around. "But there is something about walking into this room and feeling like it's 40 years ago and I was so excited to show my parents that I could be responsible and do something for the house. How kind they were to let me put this up when I know my mother thought I was nuts. It's a link to them."

Perhaps, if she wanted to, she could pull it down and sell it on eBay for a princely sum. We looked at a seam which had come loose and it seems that a slow tug would get each strip off the wall in one piece. "You probably could make a lot of money since this kind of thing is worth a lot," I agreed. "But what would you lose in the process?" She smiled. "You get it," she said. This wallpaper represents something much more, something that repainting in a lovely buttercup yellow isn't going to capture.