The Things I See

The last couple of weeks have found me in a couple of very interesting buildings. The first object of a blog post is an auction house in the city. It's in a section of town which has gradually, over the last 10 years, seen urban renewal. The building itself used to be a printing house but is now a place of, for me, wonder at the art contained therein. To inspect the building was going to take some time. Fortunately, across the street was a brand-new Portillo's. 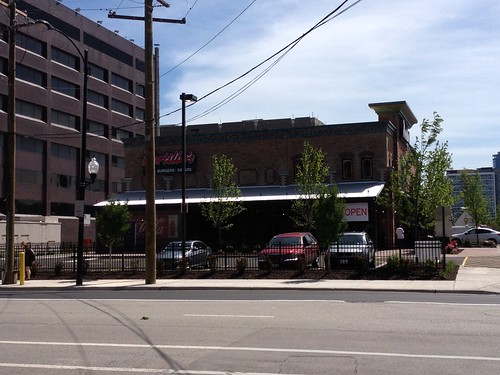 This is important for lunch, you know. I hadn't had a slice of their amazing chocolate cake in a long time. It's also great for the neighborhood. This location serves salads. My co-worker got their apple cranberry chicken salad and it looked very good. I usually order a polish, mustard only, fries and a medium Coke. (They don't serve Dr Pepper.) But I looked at her salad and thought, I could eat that. It looks delicious and better for me than a polish.

The building was 4 stories of treasures plus basement storage. I found the two turtle doves, but no partridge in a pear tree. 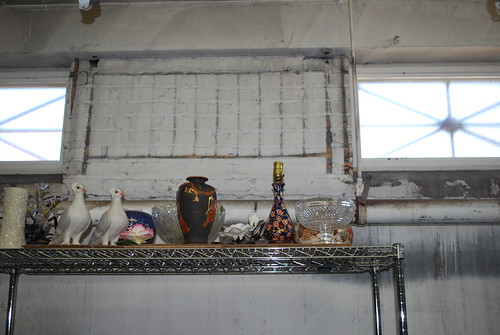 There was this sculpture sitting off to the side.

It's a light-weight bronze of cattails. I could see this in my yard. I have no idea if it was designed for the yard or if it's indoor only, but it's really distinctive.

There was this globe sitting on a table in amongst a section devoted to garden sculpture and wicker seating. 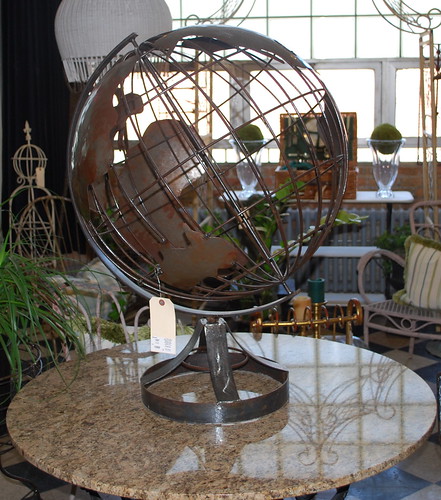 Again, I have no idea if this is something you could put on a pedestal and sit in your yard or is it only for, say, an enclosed patio or your living room. In any case, I don't have room for it but it's one of those things I'd covet.

They didn't have a lot of paintings. They don't deal with many of those, I was told, because other auction houses handle them. There is a thriving paintings market in Chicago, something I sort of suspected. The "knick-knacks" they have, if you will, are just as valuable, particularly when they are older and in excellent condition. But, they will take paintings for sale and the climate controlled nature of the building means they can sit for awhile without damage.

A long time ago, I used to edit a railroad historical publication. I have a few things in my house from those days. I saw this. 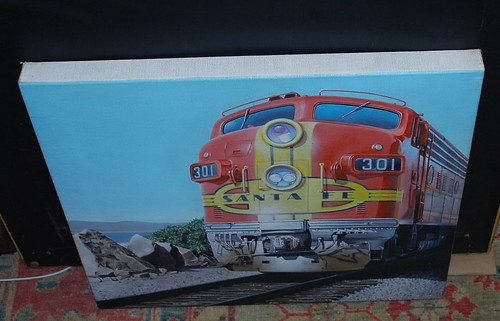 I'd hang this on my wall. I love the colors and how immediate the train is.

Also something I'd put on my wall is this one. 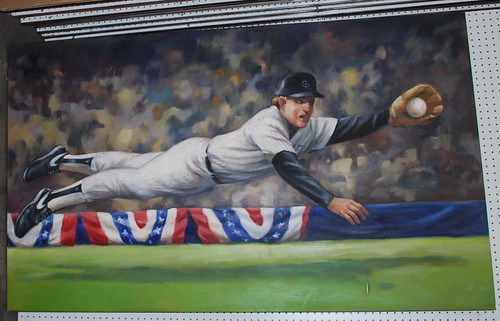 I've been in a lot of homes where there are art collections and it's rare to see baseball paintings. I like the action of the painting. It was big, 5 feet in length, so you'd need a large wall for it.

And there was this. 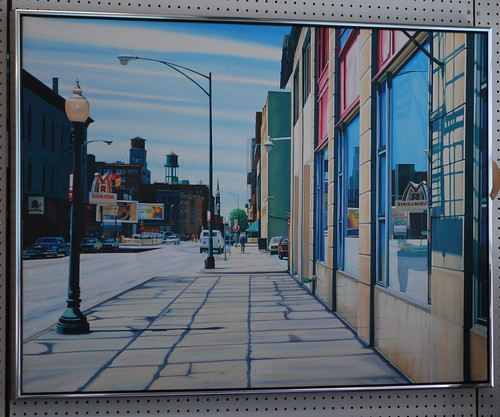 This is quintessentially Chicago. Mr. Submarine sub shop is not something I've encountered outside the Chicago city limits. It's a classic mix of old and new buildings on a street in the city. I've walked this street. I've taken photos along these streets. It's a hot summer day. The sub shop beckons. Air conditioning and an ice cold beverage. This was also a large painting. I would have to remove quite a bit of my current art to accommodate it. Still, I wouldn't have to repaint the walls. It would look good with my current paint scheme.

There was a giraffe under plastic because you know there would be. 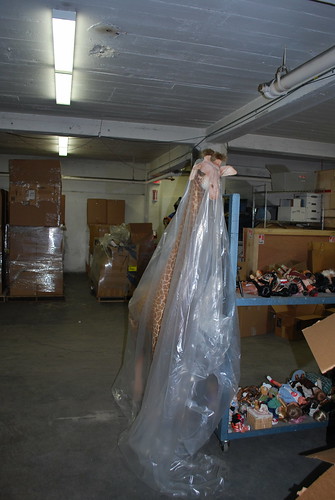 And there were mirrors, lots and lots of mirrors on one section of a floor. One, in particular, was ripe for a photo. 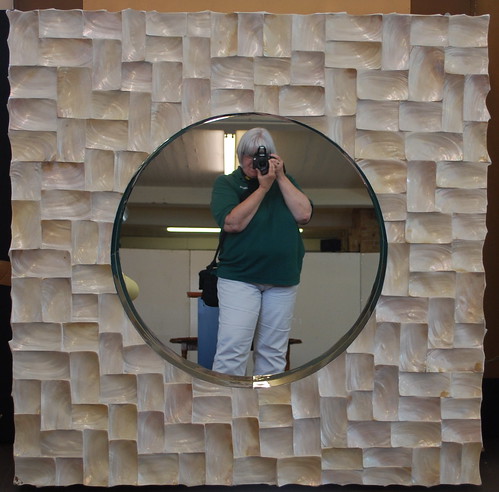 You know I rarely post photos of myself to this blog, but here I am, camera in hand, working. This mirror was huge. It functions more as an art piece than a mirror.

They have an upcoming auction of posters of Chicago and surrounding cities. Many were of the Art Deco age, highly stylized and touting taking the train or the South Shore Lines into Chicago or Indiana Dunes. There were 1933 World's Fair posters and general prints depicting 1930's-era Chicago. I recognized some landmarks, but there were a few prints showing buildings long gone. If I had a) the money and b) the wall space... The person I chatted with said art is the one thing which doesn't lose value. She said there are a lot of people with money in Chicago now and they are looking for distinctive pieces for their space. "You just need a couple thousand to get into collecting." Um...yeah. About that.

I'm content to just be in a space with art. I don't have to have it. I do understand the value of surrounding yourself with pieces which reflect your taste and which could appreciate in value. I also understand the need to patronize young artists so, if I'm going to buy, it's going to be from one of the many art festivals which seem to be every two or three weeks during the summer.

I very much enjoyed this inspection. It was a lot of walking and climbing of stairs but I could lose myself in the peace that comes from being surrounded by art.