I'm working around the yard, having found a very reasonably priced gentleman who is willing to do heavy lifting to rehabilitate this overgrown jungle. Now that the northwest corner has had all the garbage trees removed, I need to add more grass seed and applications of weed killer in spots, I have plants for over there and other things are happening.

Over the weekend, I had to cut back some more garbage trees because they encroached on the drive. In the process, I liberated the sundial. 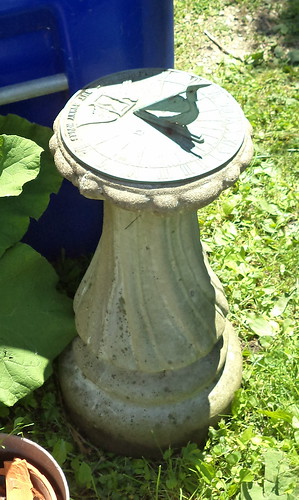 I've had this piece for a very long time. It was a Mother's Day gift when Carole was small. It's solid concrete with a metal sundial and probably weighs a good 100 pounds. Years ago, I could heft this and move it to a new location, provided that location was, roughly, 100 steps or so away. Now days, there was just no physical way.

It was in amongst some garbage trees which I hacked back. Then I had to tip it over and roll/drag it out of the brush. Once out of the mess, I righted it and tried to pick it up, remembering all the times I used to do this. I knew it was heavy but was unprepared for the weight. It needs to go to the northwest corner of the house from the west side, south of the deck. I'm not going to be able to carry it, at all, and I shouldn't even try.

So, I tipped it onto a corner and rolled it. It's still an adventure because I have to let it fall if it wobbles. It's not going to get beaten up at all by falling over. We have this instinctive reflex to snatch at something which is tipping, but I have to greatly suppress that instinct or I'm going to substantially hurt myself. Every day I come home, I roll it a bit more. It's reached the north side of the deck stairs and about 5 feet beyond that. There's still about 25 more feet to go. Once it reaches its destination, I have to orient the dial so it reads the correct time. The question then becomes, daylight or standard time.