On the secretary in the living room is a 365 New Word-a-Day calendar. I have purchased one of these every year since 1980. That's 35, well, 36 since 2016's is in the box waiting for New Year's day, years of words. Some I know. Some I've never heard of before. Some I have just an inkling of what they mean. It's a great way to maintain my vocabulary.

It's always a source of immense humor when the word of the day accidentally corresponds to what's going on in the day itself. Let's look at the November vacation.

For some reason, I don't have a photo of November 3rd, which was a travel day, but I do have the words from the 4th through the 9th, when I returned. November 4th's word was perfect. 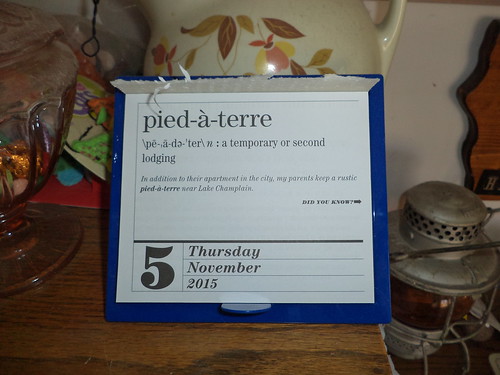 My "temporary or second lodging" was a hotel near the Anaheim Convention Center. How apropos. 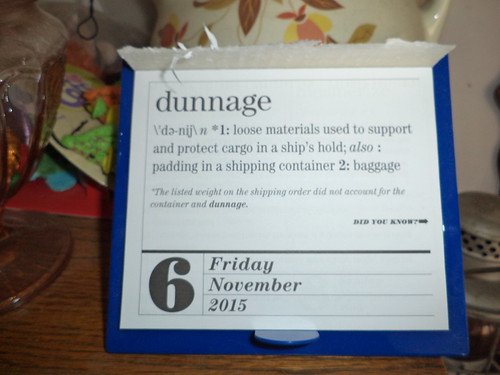 I guess I could say I used dirty clothes as dunnage to surround the few souvenirs I brought back.

Saturday and Sunday's words, on the same page now, (I remember when they were separate days.) are easier to tie to the day itself. 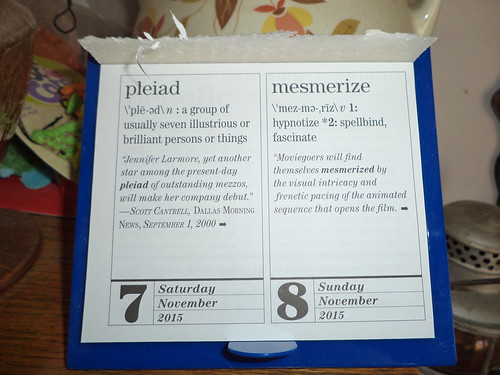 Ashley and I attended the Legion (World of Warcraft's upcoming expansion of the core game, with new quests and excitement) question and answer discussion on Saturday. There were seven developers trotted out onstage to answer fan questions. They might be a bit uncomfortable being referred to as a "pleiad" but it fits.

And, I made one of those facepalm connections which I'm sure everyone else knows, except me. One of the easiest constellations to find is the Pleiades, or The Seven Sisters. It's a cluster in kind of a stretched-out "w" near the north star. I looked at the word when I got home and had an "aha" moment. I don't know that I'll have a reason to use the word, since it requires a group of seven, but we'll stick this in our verbal arsenal and trot it out, assuming I can remember.

What to say about "mesmerize"? I know this word and, boy, if ever there was one more apt for the day we spent completely at Disneyland, I don't know what it is. This is a perfect example of how, sometimes, eerie it is when the word and the day dovetail.

Monday was "go home day". The shuttle came to the hotel at 5:35 a.m. Technically, I got up at 7 a.m., my time, but tell that to my cell phone alarm clock. It took a full 75 minutes to go from the hotel to the airport, picking up three more people along the way, which resulted in a full shuttle, something I'm sure they like.

When I arrived, I was hustled through a different security line. This one went much faster than the line I could see when I walked through the door. Oh the goodness of deciding to download United's cell phone app which allowed me to check in completely, luggage and all, while waiting in line for the Cars ride. 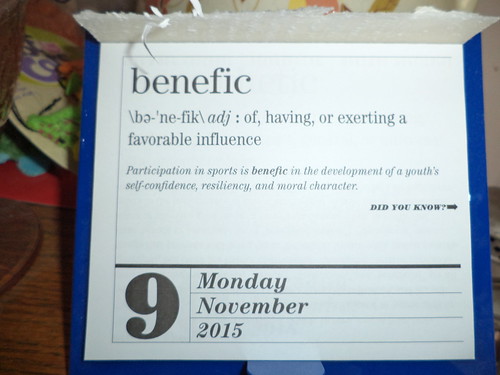 I was able to by-pass a huge line by the front door and speedily get through the first check point. I don't know what benefic I was privy to, but I'd take it. That lasted until I rounded a corner to go to the TSA metal detectors. Um...yeah. As bleary and hungry as I felt, I was ever so glad I had been made to get up at 5 and get to the airport by 7:15 for a 9:30 flight. By the time I got through screening, got some breakfast and made it to my gate, it was time to board. But all benefics stopped once we were on the plane.

There was an issue with a paper copy of our flight report and FAA required paper manuals. Then there was a problem with a defect in one of the cargo sections of the plane. When I finally landed at O'Hare, a confused older gentleman tried to walk off with my luggage, even though a very nice security guard kept telling him the suitcase was mine and not his. My limo driver was nice about the whole thing, once we finally connected, but he was a bit put out when I didn't arrive at the destination point because I was dealing with my luggage.

The biggest benefic was good traffic so the drive home only took 45 minutes. My house was still standing and my cats were waiting.