I don't know how salespeople do it. As the year comes to a close and I look backwards, I see that I have averaged a trip every two weeks since Memorial Day, including scheduled vacations. Now, I like to drive the Jeep. It's probably why, even considering the lack of finances, I keep pouring money into its repair. It's fun to drive. But when the week includes day trips resulting in 10-14 hour days or repeated overnight trips, it's becoming not fun, not fun at all. The huge amount of work that still keeps coming results in travel. You're nobody until you've had your black cat "yell" at you because you're not home for lap sleeps.

And yet, even when I'm supremely tired, I find things that take my breath away. This is Shawano Lake. 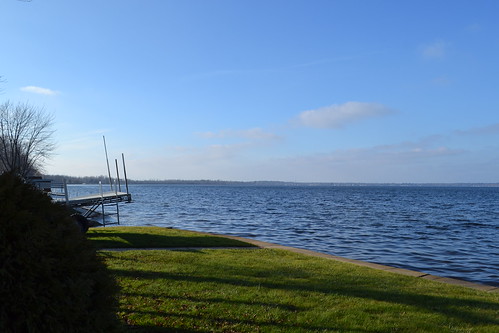 I've had to do inspections of homes which sit, as you can see, less than a stone's throw from the water. 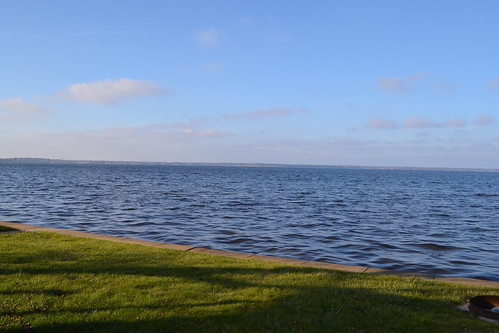 There are no basements and one home was a vacation home, but all of them have a gorgeous view across the lake. I was told there's not an issue with flooding, as you would have if you lived next to a river. Sometimes the lake is a "bit over the grass", but it's very rare. I was told there is always a breeze, sometimes a strong wind and the temperature along the lake can be 5-10 degrees cooler than in Shawano, 5 miles to the west. I can see why these people chose to build here. I don't think I would tire of the view.

On the last day I was there, I was doing an exterior inspection and there was this very curious noise. There is a small creek which empties into the lake at this point and a bridge over the creek had been redone over the summer. I walked over to the creek and saw this. 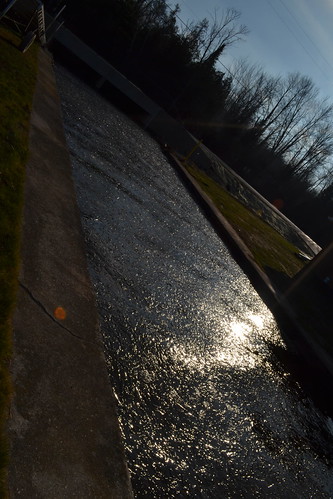 This is ice in the creek. The end, where it meets the lake, is a concrete sided causeway, the better to facilitate flow into the lake and to minimize flooding. People have built homes within 10 feet of this. 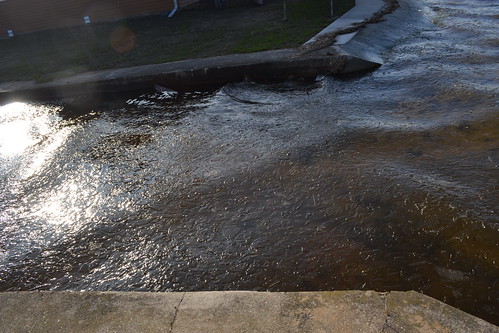 The ice made the natural waves of the lake undulate as they reached the shore, rather than rise up as we normally think of waves. So it was akin to the motion of a liquid in a bowl if you just move it gently side-to-side. Yet the sound. That's what was so curious; the sound. I'd never heard anything like it. It took me awhile to liken it to something with which to describe what I was hearing. Fill a bowl with marbles and then put your hand into the bowl. Start stirring the marbles, occasionally lifting out a handful and letting them cascade back into the bowl. That's the closest I can come to the sound. I realized it was the sound of ice pieces colliding off one another and the concrete shore.

I never asked if the canal ever freezes or if the lake keeps it perpetually open. As much as I would love the view, the constant noise, particularly this kind of noise, I would not love. The natural world is so very interesting.