If you are a planning a trip, one of the things which can be worrisome is what to eat. This is particularly true if you are going to a different area of the country. Your local hamburger joint, who knows exactly how to make your burger, will be nowhere in sight and "medium" to you might be "medium rare" to them.

This gave rise to the national chain. You know, when you walk into a TGI Fridays, exactly what the food will be like. If you order your burger "medium", it will be the same "medium" in Fort Lauderdale as it is in Naperville or Denver or San Diego. There is comfort in that, but there is also less of a willingness to get out and try things, to walk into a diner where they don't know you. Foodies and travel gurus recommend going out of your comfort zone and going into the local restaurant scene. You never know what gem you will find.

It helps to have someone who is familiar with the area to guide you. I have to admit that going to visit Carole and Larry means a trip to Carousel. 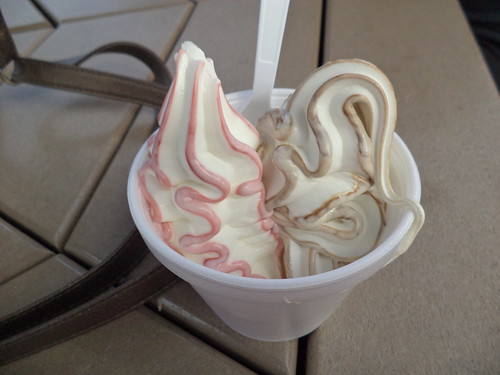 So, we had to drag Larry around to some of the local restaurants which are staples of life here. We had lunch, the first day, at Alfie's. Alfie's has been around for over 40 years. They started as strictly a burgers, fries and ribs joint but have expanded their menu to provide soups and salads and other sandwiches. But, burgers reign supreme and they are scrumptious.

After lunch, we drove Larry around to see Wheaton and stopped at the grocery. I waited to buy groceries for the kids until they were along so we could get breakfast things, beverages and other items they wanted. We came away with offerings from the bakery. 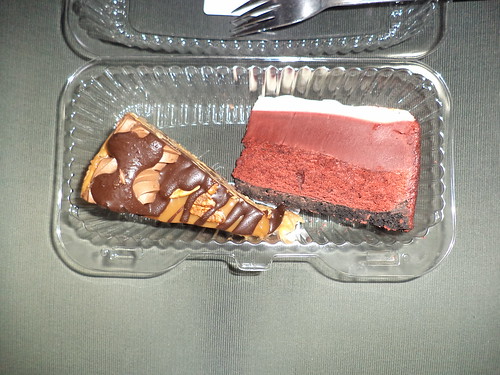 That's turtle cheesecake and red velvet cheesecake. Both were good but a bit stale. Cheesecake is best within 24 hours of making it. Most recipes I have tell you to chill 6 hours or overnight. Since these have to sit for some time before being completely consumed, they can dry out. I make a much better turtle cheesecake. I think the red velvet one would be better without the cake layer.

Saturday evening, after going to see Christmas lights, we went to a Chicagoland institution, Portillo's. At this point, I had the bright idea to document Larry visiting these places. 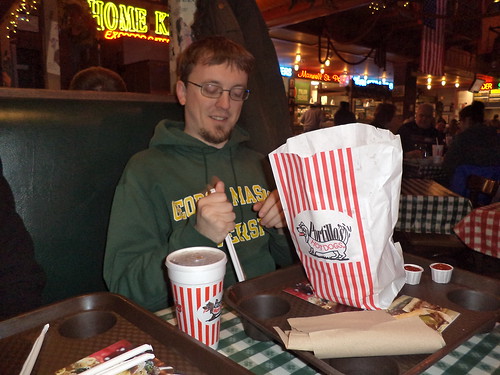 Good old Portillo's. Of course I had an Italian sausage, mustard only, and a piece of chocolate cake.

On Sunday, the kids went into the city to see the Field Museum and the Shedd Aquarium. Once back at the house, they decided we needed to go to Baker's Square. 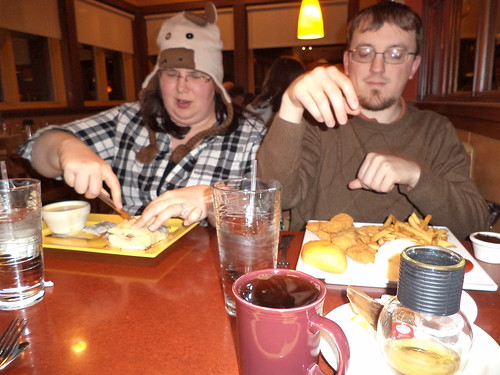 There used to be one near Wheaton North High School, but it closed many years ago, I think at the beginning of the recession. It was the 'go to' place after band practice or football games. I think the band almost single-handedly kept that Baker's Square afloat. Technically, like Portillo's, they are a chain, but they have contracted and there aren't nearly as many around as there used to be. The menu is not all that distinctive from any other restaurant and they seem to be chronically short servers. Still, we could get good food and pie and a place offering pie is usually not a terrible place to eat.

When Monday arrived, the kids decided they were too tired to go into the city for another swing through museums so we had brunch at our favorite breakfast place in Wheaton, Egg'lectic Cafe. It's been a Wheaton destination for over 15 years and, on warm weekends, the wait can be 90 minutes to get in. 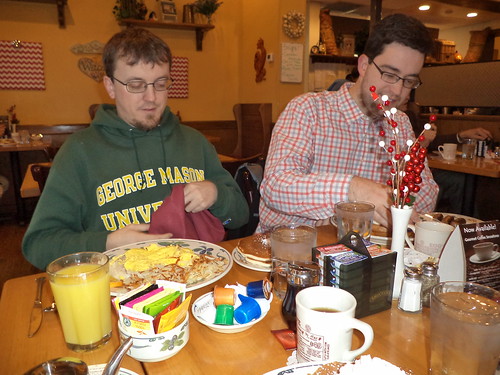 The wait is worth it because the food is fantastic with a huge variety. They can make things almost to order, with some exceptions. They also serve lunch and the restaurant can be crowded at lunch, too.

Larry was thrilled because they had biscuits and gravy and grits on the menu. Phil got pancakes and when asked if he wanted whipped cream, he declined. I piped up, "I'll take his whipped cream." 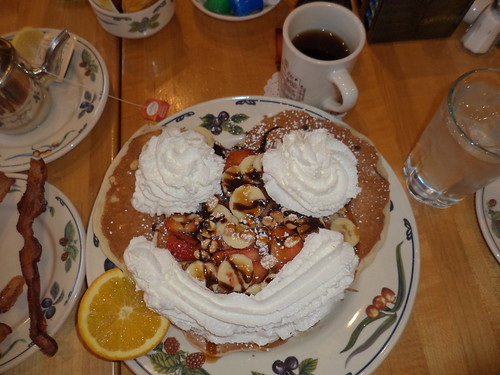 Banana split pancakes with whipped cream. I had to take half of these home for breakfast on Friday.

Tuesday, we headed to Iowa for Christmas. Another place we wanted to take Larry because they have not worked their way completely east is Culver's. 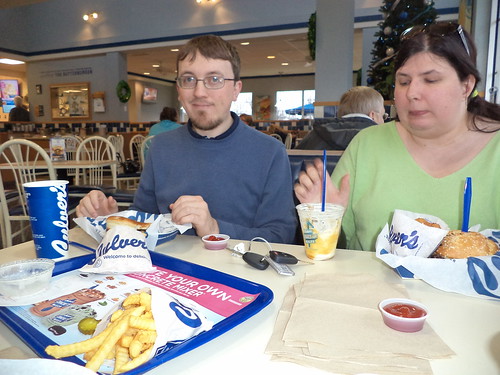 I've written about them before. Clean with cheerful people, they are a decidedly upper Midwestern chain sort of fast food restaurant. Larry's not real fond of ice cream but he had some of Carole's salted caramel "Concrete Mixer", Culver's answer to a Dairy Queen Blizzard. He said it was really good. I had an egg nog shake made with their frozen custard. Now, I really like the Steak 'n Shake egg nog shakes but Culver's was, hands down, better.

He also experienced Chicago-style pizza at Giordano's on Friday with Carole's friends. We had pizza on Monday night from a Wheaton staple, Nancy's. It was one of the few places which would deliver to Niles' so was the place from which to get pizza on Dungeons and Dragons nights at Niles'. We had Chinese food on Christmas Day from a little place, China Star, a couple miles west of me. I know the store front. It's not much to look at but man the food was good.

While a visit someplace new is all about the experience of seeing, food can often make or break the trip. There are good places to eat in Warrenton and its proximity to Washington DC means there are a lot of speciality and ethnic restaurants in that area of the country. We exposed Larry to the basic fare we know and love and, in Carole's case, miss. These were the stars of the trip. We've already started a short list of places to eat at the next time they come.