What Not To Wear

The office Christmas party at the beginning of the month is always an exercise in "Oh lordy. What do I wear?" I live in jeans, but that's hardly the proper attire for a sit down meal at a nice restaurant. At night, as I lay thinking about this, in the week prior to the party, I remembered a skirt and top that should be in the closet. I can wear those, assuming they fit.

On a partly cloudy Saturday in early December, I stood before the closet and started pulling things out. It's one of those tasks I have ignored. I bought into the whole body issue thing, that 'some day' I would be back to the size I was when most of this stuff was purchased. Then, I'd have a ready-made wardrobe. I wouldn't need to find $200 to buy clothes that fit.

Eventually, I abandoned that idea, although it wasn't very far from my mind as I went through the closet. I latched onto the reality that the stuff I wore in the 1980's is not stuff I will wear in 2014 and beyond. I do not wear above the knee skirts of the "pencil" silhouette, but I've kept those skirts in the closet under some sort of misguided idea that losing weight would allow me to wear them once again. Would it make me happy? Not likely.

I started at one end of the closet and worked to the other. There were tops and jackets and dresses to go through, in addition to the skirts. I examined each item. Oh dear. I still have this? I remember wearing it just once. The pile grew. 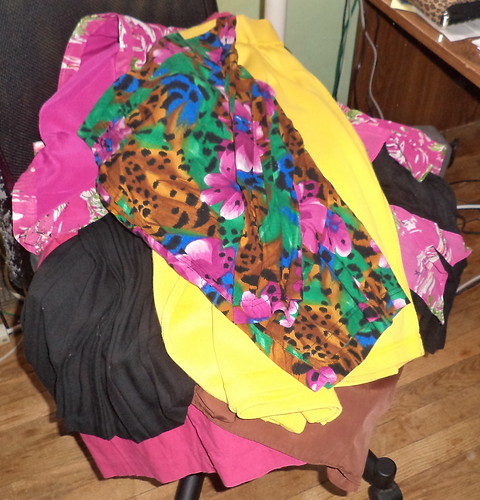 Eventually, it consumed the chair, falling to the ground. I held things up. "Seriously?" I said on more than one occasion. "You bought this? You wore it about 5 times. What were you thinking?"

I know what I was thinking. Self-esteem issues can make you buy things with unrealistic expectations for them. Take the yellow skirt above. I bought it because we were actively doing things with some people we knew who were Iowa Hawkeye fans. Iowa's colors are black and yellow. We were going to be invited to a Christmas party, an invitation that never came, so I needed to be ready. I wore the skirt for a couple of other things and put it in the closet. It was a thing to make me feel good. 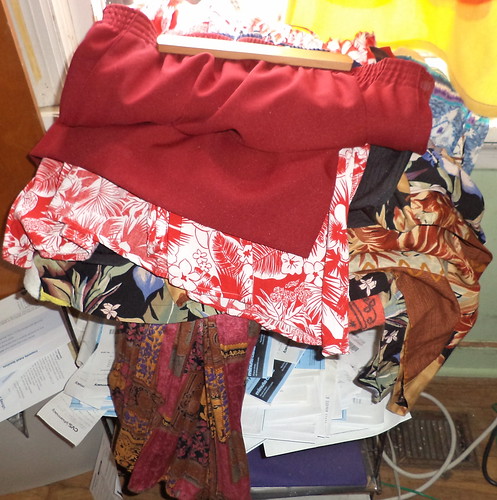 I saw, in a lot of these pieces of clothing, a need to fill an empty part of me with stuff. I found a skirt and a dress I bought that I never wore. I remember buying the skirt, not the dress, and preparing to wear it to a party. I wore something else instead. Into the closet the skirt went, never to be worn.

In the end, I had 2 grocery bags of clothes to get rid of, and just a few bits I couldn't bear to part with. The brown skirt above, as well as the flowers on black print went back in the closet. They are, technically, too small for me, but I wore them, a lot, and I would wear them again if I lost the weight I carry. The red pencil skirt and the red flowered skirt went into the bag as did the black pencil skirt below them.

I had a thought that this stuff may have value to people who thrift. Most of the clothing is from the late 1980's and 1990's. I stopped caring about "fashion" and began to care about comfort in 2000 and beyond, mainly because my job doesn't include wearing heels and a skirt to work. Not sure what I would do if my job meant I had to wear a skirt. To purloin a phrase, "I'm so over that".

The next step is to sort the give away stuff for that which I truly want to give away. Then, I should find a consignment shop. The stuff is in exceptionally good condition and would be worth a few dollars, I should think. A few dollars in my pocket is better than just giving it away for a nebulous tax write-off in 12 months.

I found the skirt and top and they fit, very nicely, too. I wore them to the party and discovered I came over dressed. Oh well. A side benefit of this is the extra closet space I suddenly have. I didn't go into the sweater section of the closet. I do need to do that, but I'm not to the point where I'm ready to take a mental machete to that section. In good time. In good time.